I think my sarcasm radar is broken.

"I would get her in quickly," the dentist said. "But just know that she's probably going to need braces twice."

I'm sure I looked with him with a bit of a panicked expression.

"It'll be fine," he said. "Just cancel your next Hawaii vacation and fix her mouth. It will be worth it, I promise."

And I stood there gasping for air a bit, completely unsure of what to say. Was he serious? We're a year out of graduate school. A fancy (or otherwise) Hawaiian vacation isn't even remotely on our radar. Should I plan one that we can cancel? Would that magically help us drum up enough money to pay for braces for her twice?

I'm sure he was kidding about the Hawaii jab. Right?


Speaking of Hawaii, some BYU guy who lives in Hawaii commented on one of Andrew's twitter posts, so I clicked on his profile to see who he was and he had a few pictures up of their preparation for Hurricane Lane (which I only recently realized was the name of the hurricane and not, like, the Tornado Alley for hurricanes).

They had taped their trampoline and shoes to the ground and a board over their window. 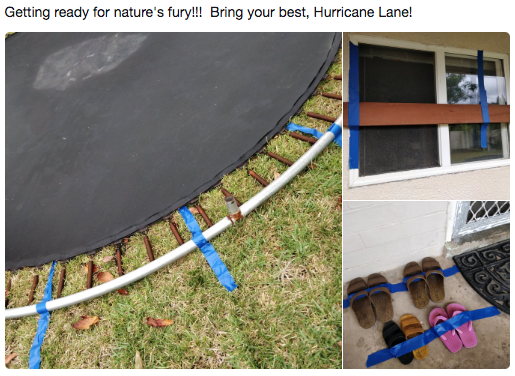 But the thing is, he doesn't have anything else joke-like on his twitter page. Everything is very serious. So I can't tell if he's joking or not. But I really, really hope he was joking about this because this is not how hurricanes work.

Typically I consider myself fairly adept at picking up on sarcasm...but these last couple of days? I dunno...
Posted by Nancy at 11:57 AM