All the Heiss Grandkids (July 28)

We held a family dinner at our house so that everyone could come see Emily—Grandpa Frank and Grandma Pat and Matt and Becky and Nicki all came (and I'm sure I'll write more about it once I go through pictures). We were lucky enough to have all twelve grandchildren together so we took an updated picture (since Alexander and Arwyn have both changed so much since the last time we had all the grandkids together—at Thanksgiving (now that I've gone back to look at the picture I can see that they've all changed a lot since Thanksgiving)).

Here is them then:

And here they are now:

Miriam is still holding Arwyn and Alexander is still in Rachel's arms, but they're both much more alert. We used the wagon as a tool to keep the going-on-two-year-olds in one place (both Logan and Carter are strapped down). The three-year-olds, Maren, Riley, and Zoë are hanging out by the wagon, which Gavin is holding onto. Kayl is sitting on his personal-space stool, and Benjamin's just relaxing on the sidelines.

Getting this picture was a bit of a hot mess, I'm not going to lie. Someone was crying in every single shot. So we decided to attempt the shot again after a few of the kids had taken their afternoon naps. And this time we remembered to have Grandma and Grandpa sit in the picture with them (which meant we had more hands available to hold babies, which was useful). 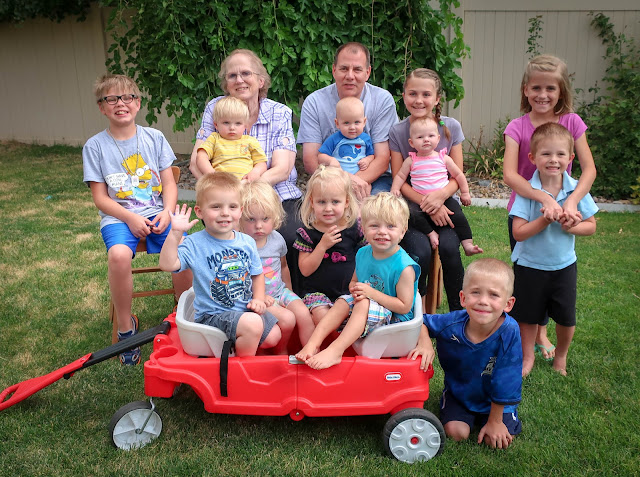 They're certainly a handsome looking bunch!
Posted by Nancy at 2:05 AM