Miriam, Alexander, and I went on a last-minute getaway with my mom and sister the weekend before school started. Austin's family was hosting an open house for him and Rosie and we decided we should go to represent the family. It's a good thing we did because I think Rosie was feeling a little outnumbered by Barkers and needed some familiar faces around her. Not that there's anything wrong with Austin's side of the family (in fact, his family is pretty amazing), just that going from single to married is a difficult transition. It takes time for someone else's family to grow on you.

Anyway, we left on Friday afternoon and drove straight to St. George where we made a quick stop to visit my friend Shallee. Her kids started school last week and she wrote on Facebook about how her cute little Amaya came home from school so excited to have made a new friend. They were both wearing the very same pair of shoes and bonded instantly.

I commented that that was fairly funny because years ago there was a girl in my US history class who was wearing the exact same shoes as me and we also bonded instantly—and it was Amaya's mom, my friend Shallee!

Here are some of our kids (and Josie and a dog) playing on the floor together: 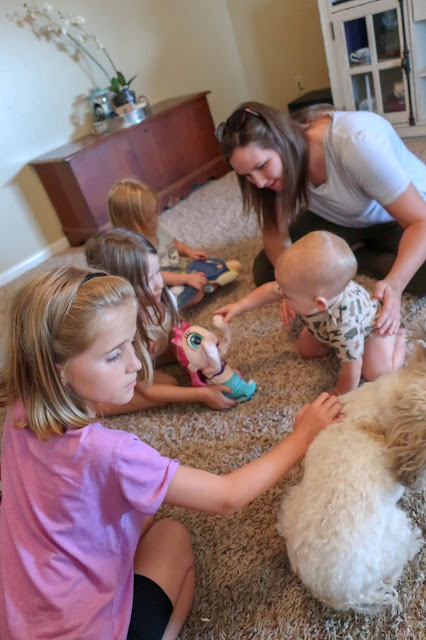 And here's me with Shallee:

We had to leave far too soon to get all dolled up for the open house. Even though Rosie told us we could wear whatever we wanted we all wore dresses and then we showed up and Austin's family was all in shorts! Oh, well! Rosie and Austin were dressed up so we matched them. 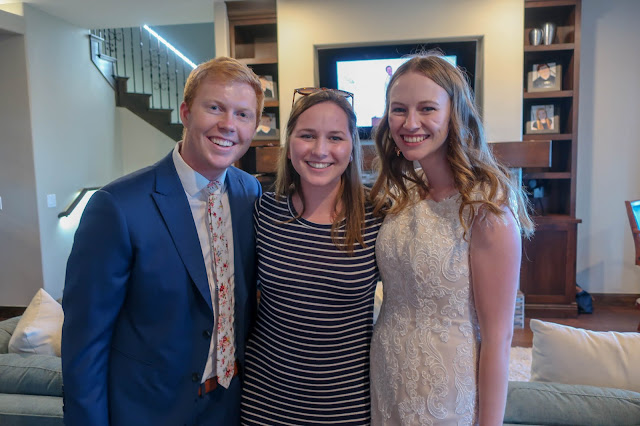 We had fun sitting with Rosie's dad, Dave, and his girlfriend while we enjoyed a light dinner and soft-serve ice cream. It was great and the view was spectacular! Here's my pretty momma with the red mountains behind her: 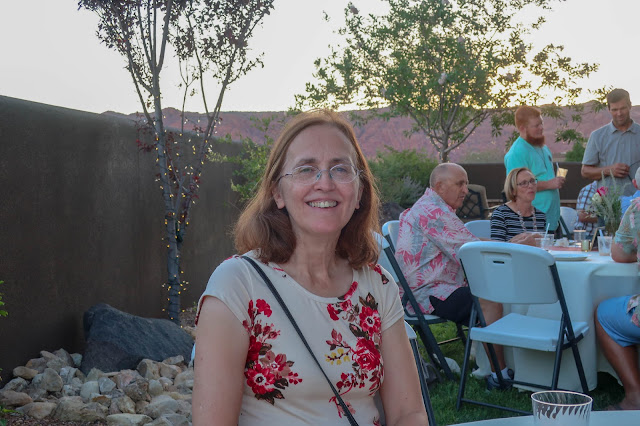 Here's Miriam and Alexander checking out the pool: 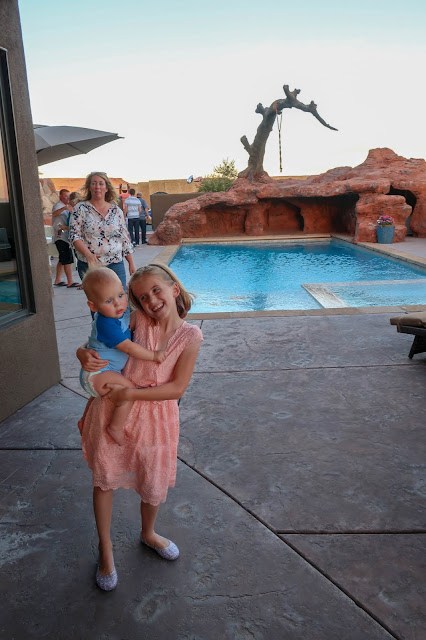 "Did you bring your swim suits?" Rosie asked. "Because I think we're all going swimming after..." 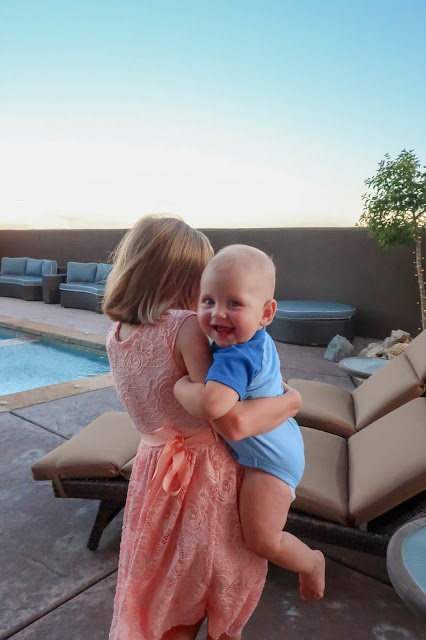 We had not brought our swim suits but after a long debate... 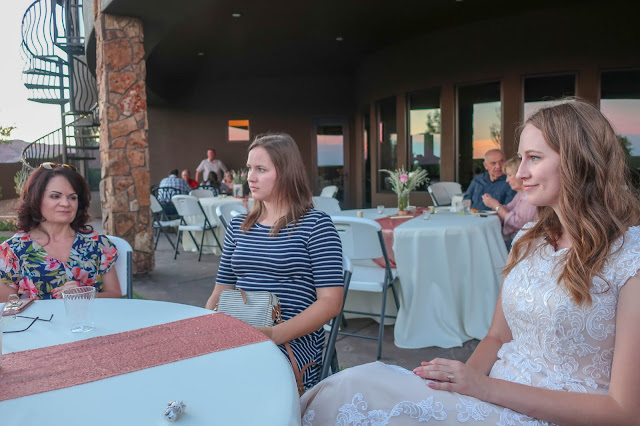 ...that lasted the entire open house...

...we decided we would run back to our hotel to get them. It took us a lot longer than expected because we got a teensy bit lost on our way back to the hotel, but we eventually made it back to Austin's parents' house and enjoyed an evening swim. It was quite magical, with the stars twinkling above us and bats swooping down every now and then to snatch a bug from above our heads.

Alexander was pretty sleepy and ended up sleeping on Naanii's lap most of the time we were swimming, but here's a picture of him with Auntie Josie: 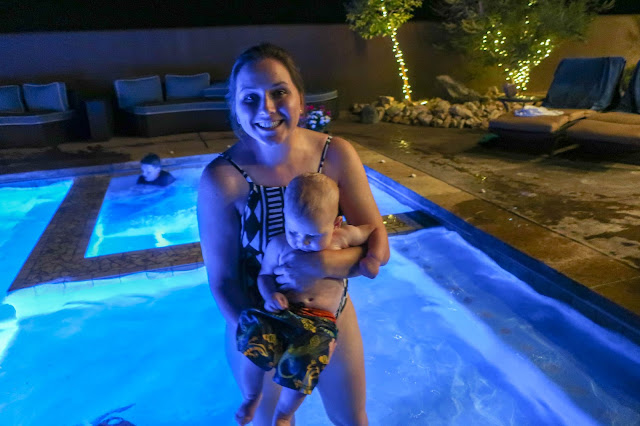 Miriam and I had a great time swimming together, though Miriam probably had the best time. She jumped off the little waterfall/cliff/platform so many times! I also jumped off, for the record, and it though it wasn't nearly as bad as Calf Creek, it was still pretty scary (which totally legitimizes my panic attack when Andrew fell off that waterfall with Alexander, just saying).

Here's Miriam at 11:30 at night when we finally managed to coax her out of the pool:

In the morning, after a pancake breakfast at Denny's, we visited the St. George Temple Visitor Center: 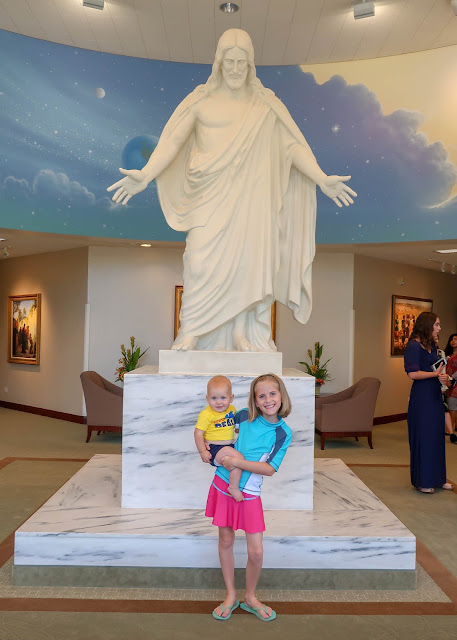 I should have been more prepared with family history stuff for this trip (but we didn't decide to go until the last minute so...I wasn't). Anyway, our ancestor Edson Barney lived in St. George with Lillis Louisa, his second wife (who is also our ancestor). He worked on both the temple and the tabernacle in St. George, which I will write more about when I learn more about it myself.

The reason Miriam is in her swim suit at the visitor center is not because she forgot her clothes but because we were also planning on heading to Sand Hallow Reservoir on our way out of St. George and she was all ready for that. We were a little bit nervous about the sign warning that "swimmer's itch is active" but went ahead and got in the water anyway (so far we've been lucky enough not to have developed a rash (consisting of worm larvae (yum)) so I suppose it was an okay risk to take). 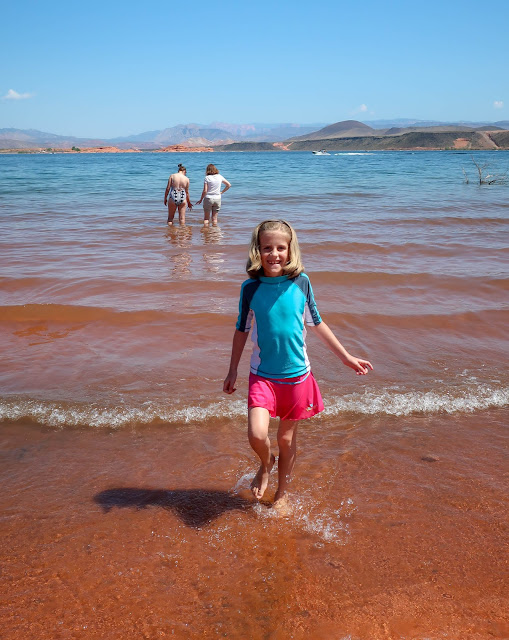 The water was warm and the contrast between the turquoise water, red landscape, and blue sky was beautiful. 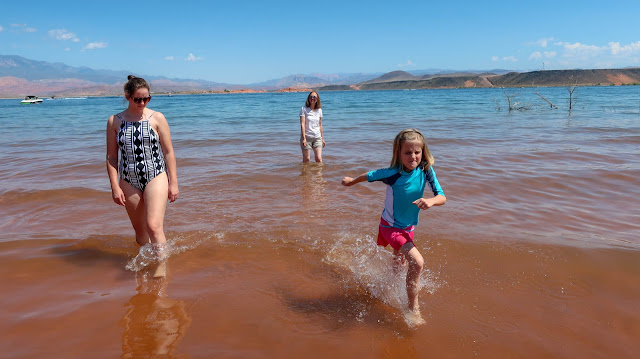 Poor Alexander woke up (after a sleepless night) feeling sick, so he wasn't in the best mood for exploring. 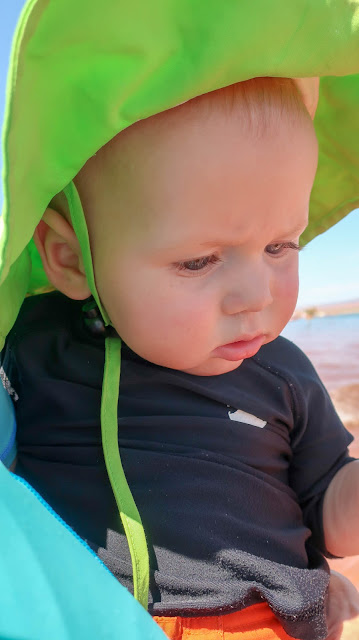 But he still enjoyed splashing in the water with Auntie Josie: 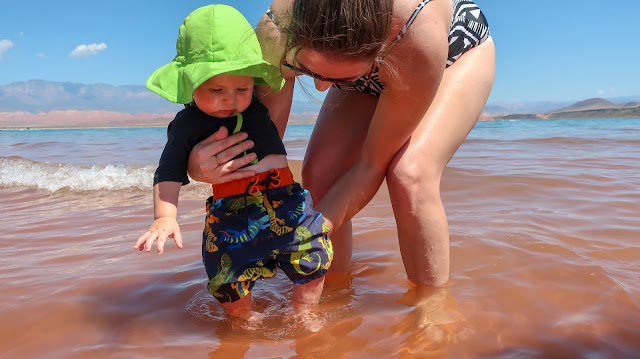 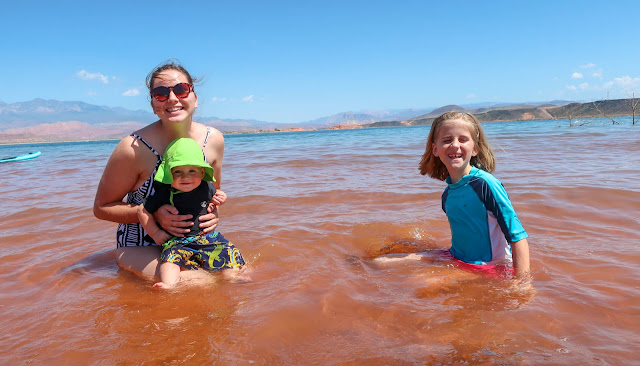 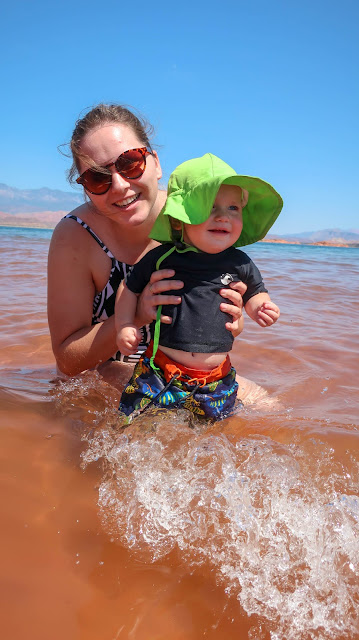 Until, you know, he didn't anymore... 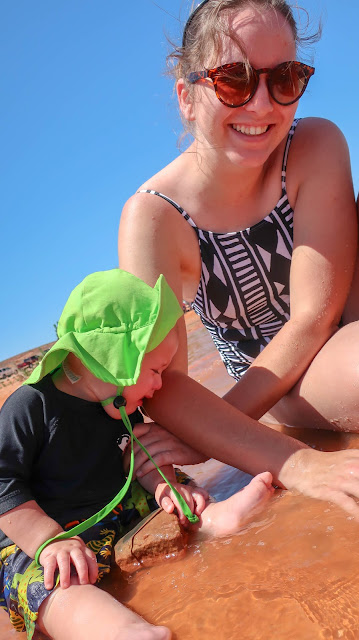 ...and then he just rested his head on her arm and sobbed. Until he realized he was holding a rock—a treasure among treasures. 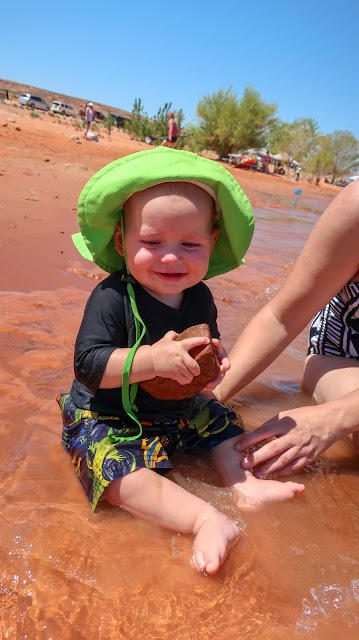 Everything was fine and dandy until we noticed that the point of the rock was missing and Alexander was...chewing. Apparently the rock wasn't quite a rock yet. It was just a very solid clump of dirt and he managed to gnaw off a piece and was happily drooling mud (not pictured). 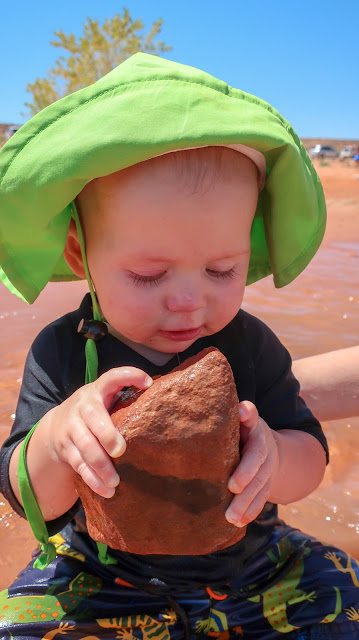 He wasn't too impressed when we took it away from him. Here he is bemoaning his fate while wading with Naanii: 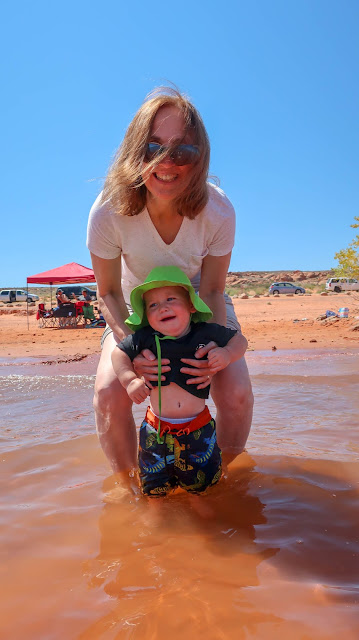 Miriam found (or was alerted to the presence of) a dead fish and created this burial mound for it: 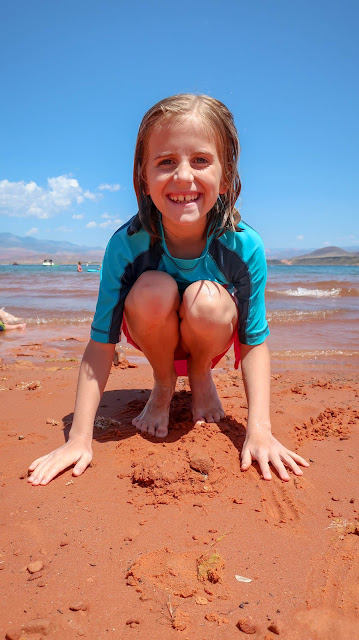 And here are a few pictures of our last few moments at Sand Hallow: 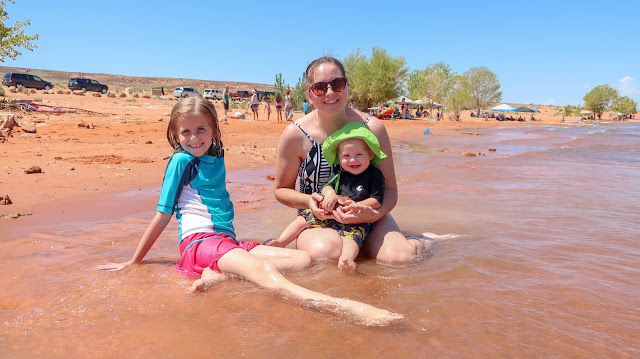 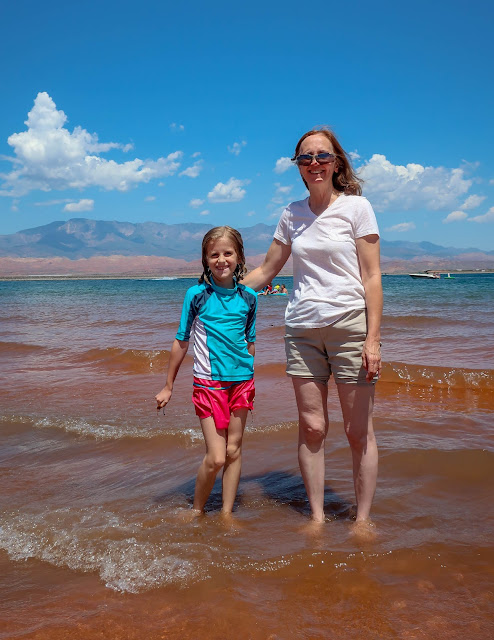 We couldn't stay too long because we also wanted to, you know, get home. My sweet little kids were so exhausted from staying up so late the night before and then getting up and playing in the sun that they both took a nap on the way home. This is, quite possibly, the first time they've napped simultaneously (given that they're eight years apart this really comes as no surprise): 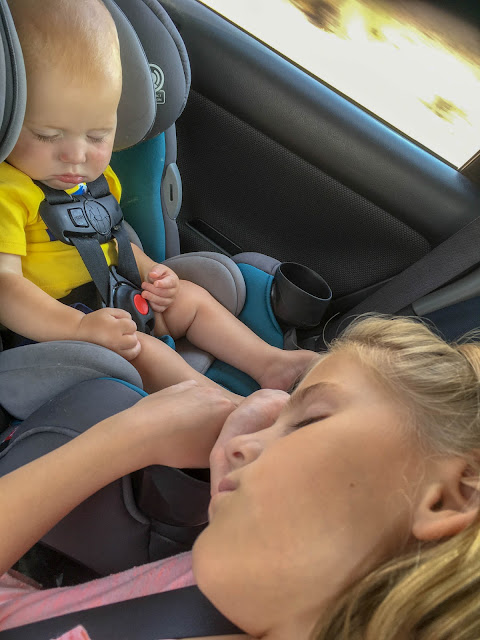 We made pretty good time and, with the baby(s) soundly sleeping, had no plans for stopping until we saw a sign warning of an accident up ahead, for which we could expect delays. Josie had the idea to pull off the freeway for a lunch break, so we did because we figured that it would be better to be stuck with food and restrooms than it would be to simply be parked on the freeway. While we ate lunch we checked for information online about the accident. I couldn't find much about what had happened, but whatever it was was clearly quite bad. We could expect the traffic to start moving again in about an hour, and even then it would be slow going. But Josie found a little workaround and instead of hopping back on I-15 we got onto highway 271, which runs parallel to the freeway.

Here's a picture of how backed up traffic was at the overpass (of highway 274): 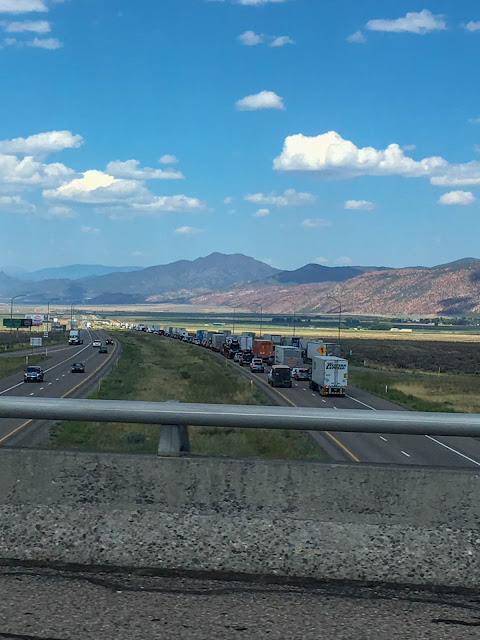 I gave the conservative estimate of cars being backed up "for a mile" but Andrew told me that he was seeing on Twitter that cars were backed up for multiple miles. I just measured on the map from this overpass to where the traffic finally cleared (about at the overpass of 700 N/Little Creek Canyon Road), a distance of 3.5 miles!

We were happy to have bypassed all that traffic, but our minds and hearts were certainly with those involved in the crash (which turned out to be a tragic, heartbreaking accident). We were thankful to have arrived home safely, if only a little later than planned (but feel devastated for the poor family who lost their little boy).

It was really quite a fun getaway! We should plan another one (though maybe next time we'll plan to have the baby sleep instead of keeping everyone up all night long).
Posted by Nancy at 11:01 AM