I survived the GRE

After months of preparation, I finally took the plunge and sat for the GRE today. The results were unsurprising: I performed excellently (95th percentile) on the verbal reasoning portion and only mediocrely (50th percentile) on the quantitative section. This was a little disappointing given how long and hard I studied, however, I'm confident my studying paid off and that I wouldn't have known a gosh darn thing if I had attempted the test without studying. Plus, I wasn't planning on entering a math-heavy program anyway so that score isn't quite as important.

While I only have my preliminary scores, I'm sure my official scores will be high enough to get into the graduate program of my choice...whenever I officially make that choice (that particular matter is still up in the air).

I was surprised that the writing section came first because in my prep book (I used Kaplan for both verbal and quantitative and, I suppose, for writing (but that was in the verbal book)) the information came last. Or maybe I just looked at it last? Either way, I expected it to come last.

Luckily I felt like I had some good things to say for the two prompts I was given, so hopefully I will score proficiently there (though I won't get those scores for a couple of weeks yet since they are graded by humans).

The quantitative reasoning sections had me sweating and shaking. I ran out of time on both sections and quickly went through to guess on any unanswered questions before the timer ran out. Some of them I know that I knew how to answer but that I didn't have time to come up with the answer. I much prefer a more relaxed mathematical environment (studying for the test was actually kind of fun (in a way); I enjoyed tackling new-to-me concepts (hello, quadratics) and the feeling of (eventually, kind of) understanding things). But the actual GRE quantitative reasoning test? That was no fun.

The verbal reasoning sections were marvelous. I didn't take the ten-minute break in the middle of the examination because the vocabulary sections were like a break for me. I finished each section in fifteen minutes, then had about that long to go over my answers and stretch and take a few deep breaths before skipping on to the next section at my leisure.

After completing the essays, two quantitative sections, and two vocabulary sections there's a "bonus" sixth section, which I was literally praying would be a verbal reasoning test and not a quantitative test...and it was. I was so happy.


Technically, I can't be sure which section was a test section, though clearly it was one of the verbal reasoning sections. So one of those three tests will be unscored (but used, I presume, to base the scores off of for next year's test).

And now I don't know what to do with my life (okay, fine; I have plenty to do: write, play with my kids, pack up the house, move to Georgia, etc.) now that I no longer feel the pressure to polish up my rusty mathematics skills (I haven't taken a math class in sixteen years). For the past five months I've spent nearly every evening in my "office" outside of Alexander's room, studying while waiting for him to fall asleep (lying on my stomach with my feet sticking into his room so that he knows that I'm still there).

He gave me the wonderful gift of (a) sleeping solidly from midnight until 8 am from Saturday–Sunday and then (b) sleeping solidly from bedtime until 6 am from Sunday–Monday, so I got to go to this exam feeling relatively well-rested (though I still wonder if I will ever recover from waking up every 3 hours, on average, for the past...seven years).

All the kids prayed for me to do well (and apparently told all their friends about it; Tayah just walked into our house and said, "How was your test?") and Miriam even wrote me a little note of encouragement (perhaps inspired by the notes I wrote for her during her big week of testing earlier this month (her teacher sent home a packet so that parents could write a note for each day of testing): 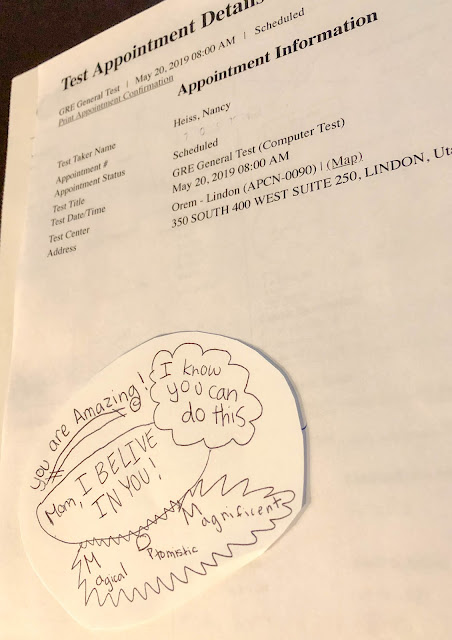 The first thing Benjamin asked when he saw me was, "Did you win the GRE?"

There's no real winner on the GRE...but yes. Yes, I won. Soundly.

And now Andrew's making me my favourite meal (his own copycat recipe of spicy cashew chicken from Bua Khao in Cairo (which doesn't seem to be one of their signature dishes anymore, unfortunately)) because he's awesome like that.

(One more point regarding my studying, is that I never once took a full practice exam. I took practice sections but failed to ever find five hours to sit through a full practice test, so the actual GRE required a bit more endurance than I was used to (and a bit more juggling...but Andrew doesn't have to teach over the summer so he stayed home to work (and watch Alexander and Zoë) today))).
Posted by Nancy at 6:46 PM