Zoë must not be a morning person because she woke up this morning and everything was going her way (from what I could tell) and she was grumpy as all get out!

The birthday banner was up, she had special blueberry birthday cereal, and we had big plans for finishing her cake up together later in the morning, and still she sat fuming at the table because I was unable to tell her what the fourth letter of her name was.

"But what about the fourth letter?" she asked.

"Fourth letter?" I asked. "Your name only has three letters in it."

She must have thought I was playing stupid because she turned to me exasperatedly and said, "Mom. Stop. I'm four years old now. Just tell me what the fourth letter is."

"Right, so...you are four years old now..." I agreed. "But the length of your name doesn't always correlate with your age. Like...my name only has five letters and I'm thirty-three...so..." 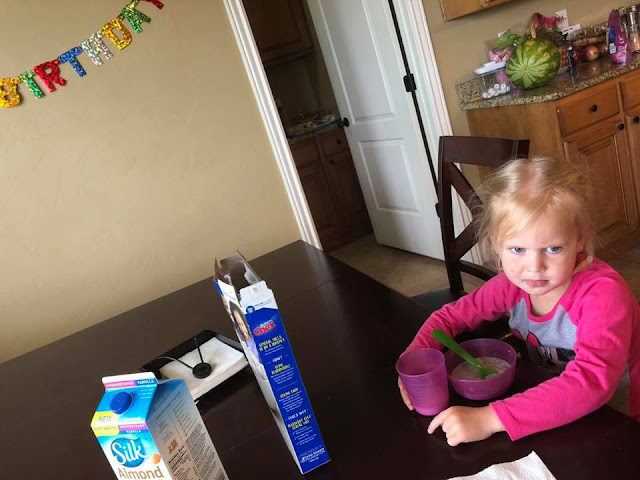 It took her quite a long time to get over this little fit (she actually brought it up several times over the course of the day), but she had fun helping make the fondant for her unicorn cake's horn and ears. She helped roll out a snake to make the horn, then we wrapped it around a chopstick (side note: she thinks chopstick and chapstick are homophones and pronounces them as such, so if she ever asks you for chopstick, just know she's really after chapstick) and painted it gold. 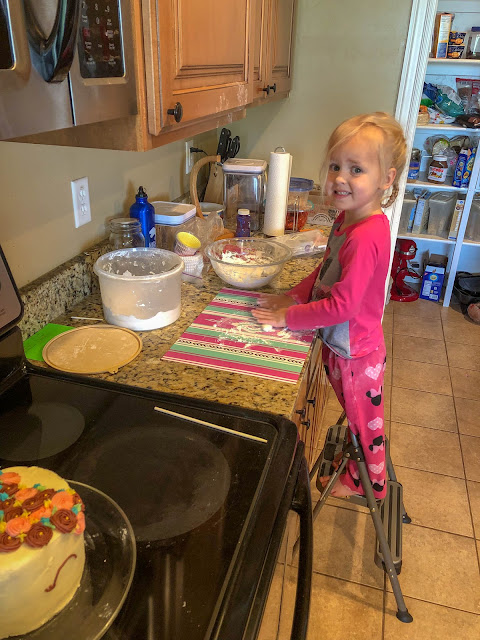 Andrew picked up some edible gold "luster" for us to use and even though it's right in there with the food stuff, he wasn't sure it was edible (and by that I mean consumable, not, like...contraband). It is, technically edible, but to turn it into paint it said to mix with lemon extract (not juice; extract) and Karen had some in amongst her plethora baking supplies so I used that and it smelled nasty. 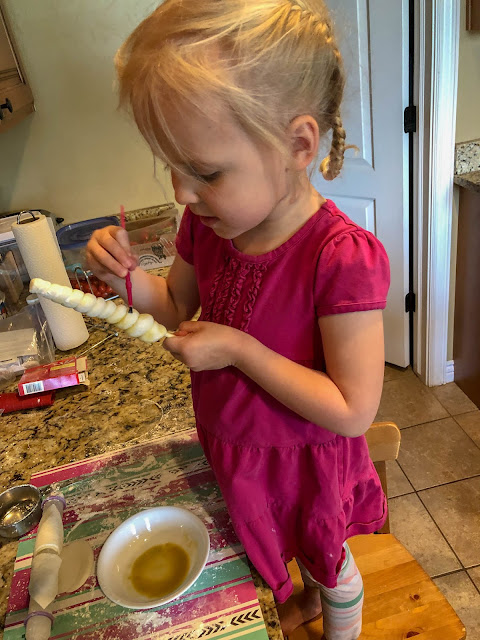 So in the end no one really wanted to eat the unicorn's horn, although in theory they could have. 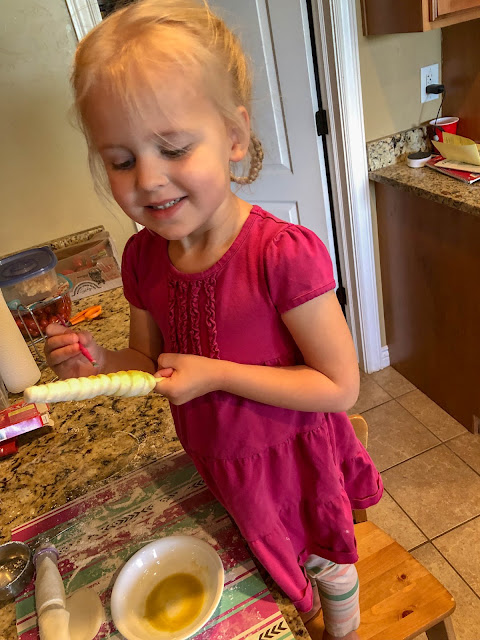 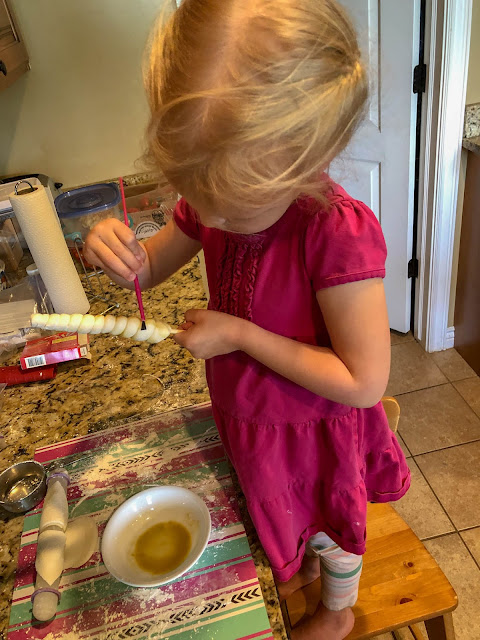 I suppose she could have air-dried, but we had to run to the school for the 6th grade BBQ so she changed out of her wet clothes (so that we could walk to the school in the rain—I definitely thought that one through). All that is to say: she's in yet another outfit for the next batch of pictures.

We didn't do anything big for her birthday, which she was a little upset about, but I think it ended up being just right. She loved being the center of attention and while I totally flubbed on presents (we didn't even go shopping for her—we just gave her hand-me-down clothes and stuff we had lying around (we're moving soon, okay?)) my mom totally nailed it!

She found this fluffy unicorn backpack at the BYU bookstore: 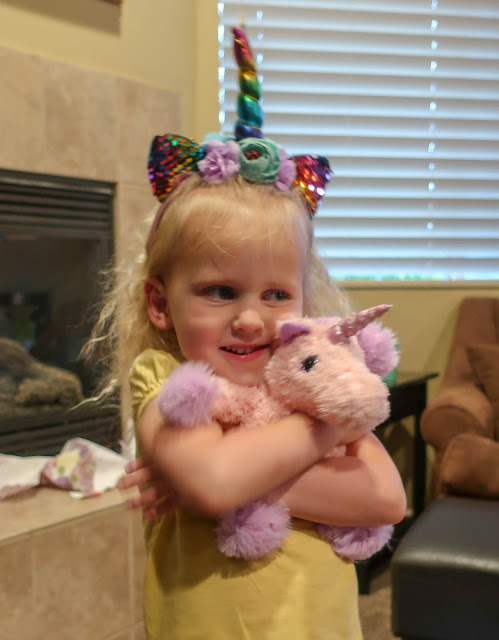 It's a fuzzy pink backpack that Zoë can wear and it has a little pouch (like a baby carrier) that she can strap her unicorn, Ellie, in for a ride. She loves it so much that she promptly "passed on" her old unicorn stuffed animal to Benjamin. Auntie Kelli gave her a "reversible" unicorn a while ago (Christmas, I think?) and the "other side" is a frog and Zoë has always had a love/hate relationship with it; like, it's had a place of honour in her bed because unicorns but she's never quite trusted it because frogs. So I wasn't remotely surprised when she skipped up to me to announce that she had just "passed it on" to Benjamin (I don't know why it's so funny to me when she says "pass on" but it just is for some reason).

Here she is hugging Ellie (you can see that cute blue dress on the floor, which is also from my mom; it has the letter Y on it (for BYU, really, but also because Auntie Josie suggested that Naanii get Zoë and extra letter for her name: Zoey)): 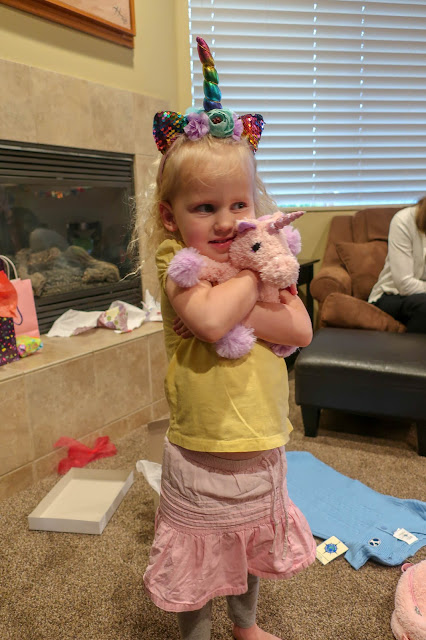 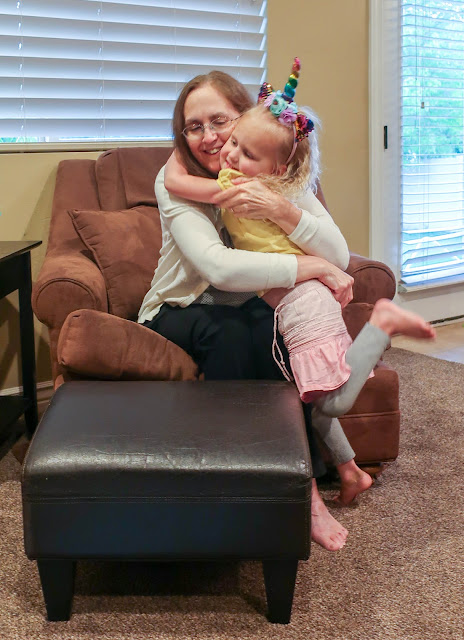 Here she is quickly opening the few presents from our family—some new shirts that I didn't buy for her, precisely, but which her older sisters never got around to wearing (she also got some 4T footie jammies that are 100% hardly-worn hand-me-downs (probably because we lived in the south and you don't really need footie jammies there...and guess where we're going...) and some painting books): 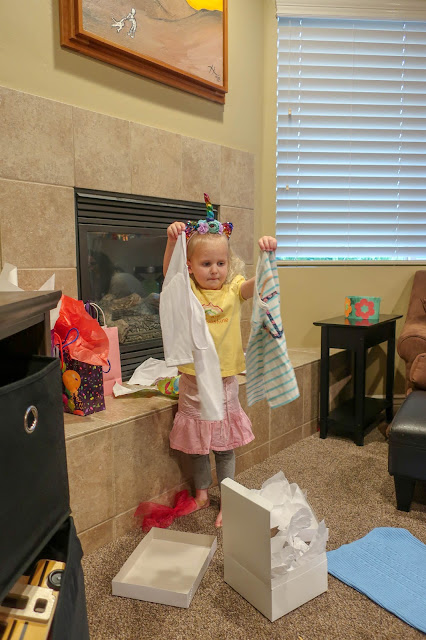 And here she is opening the present that Miriam got for her: 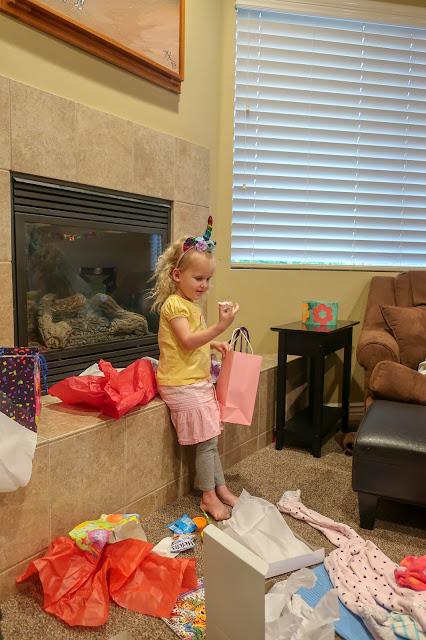 Miriam wasn't at Zoë's birthday party because she was at her friend Lola's birthday party instead (but I suppose since we forgot to take a group picture I could have left that part off and our memory would change to include her in the evening because she would ordinarily be at such an event) so I'm glad we got a picture of Zoë opening her present. Miriam saved up her tickets for the school store (for quite a while) and went on a shopping spree for Zoë this afternoon. She had all sorts of things in there—play-doh, silly straws, fruit snacks, candy.

Zoë loaded everything into her unicorn backpack and is currently sleeping while wearing the fully-loaded backpack (which sounds entirely uncomfortable, don't you think? But I couldn't convince her otherwise). 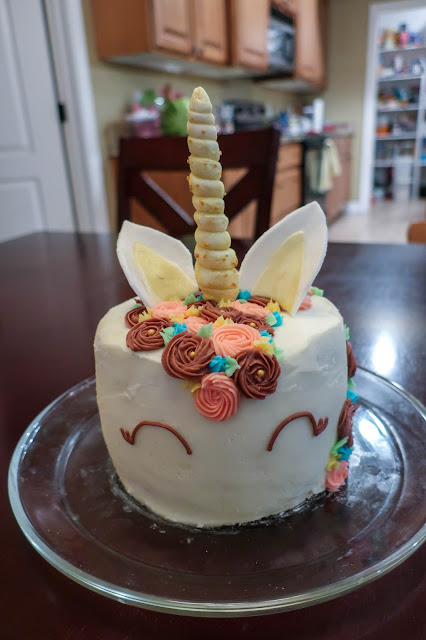 It was fun to decorate, as cakes usually are...after I got a crumb coat on.

I don't know why I have such trouble with that step. This time I decided to freeze the cake layers so that the crumbs wouldn't lift off the cake as easily. But then, somehow, my icing froze when I put it on the cake and I couldn't even spread it and it kept falling off the cake in chunks of frozen disaster.

But I always start my cake decorating process by crying about crumb coats.

Why should this cake have been any different?

I should just know by now that crumb coats are awful.

So the icing ended up being a little thicker than I intended (because I had to use more icing to fix the monstrosity on the plate after my initial icing attempt) but in the end it looked fine. Making the mane was actually not too difficult, though I wasn't sure I loved the colour palette I ended up with (randomly mixing colours, as one does) until I stuck the gold candies in the middle of the purple rosettes. It tied everything together nicely. 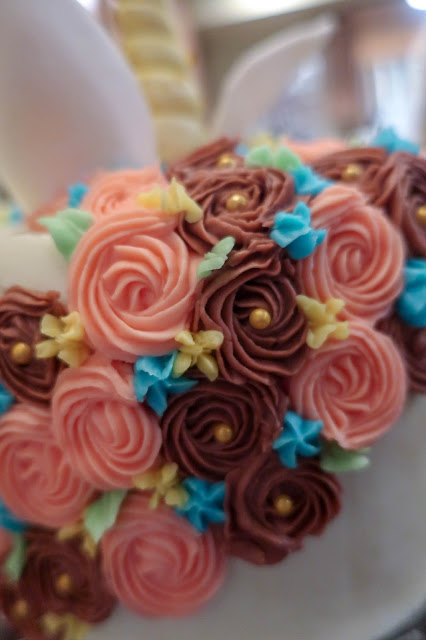 Here's Zoë with her cake before candles:

And after candles (she was so excited to blow them out that she almost blew them out before we could sing to her—we had to stop her and remind her that we sing first!): 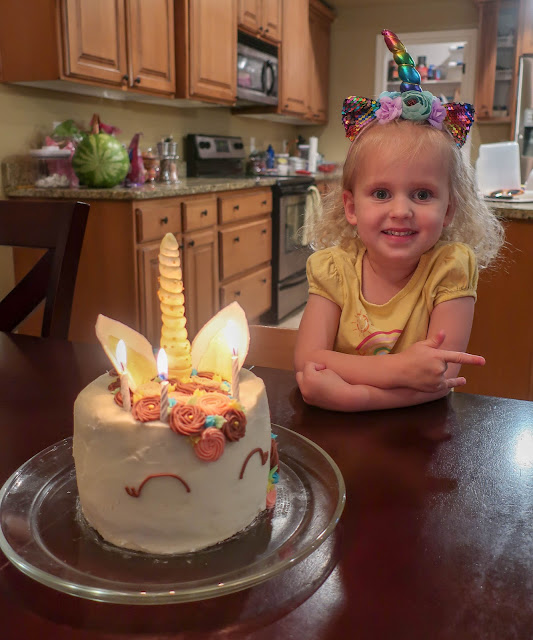 Here she is blowing all four candles out: 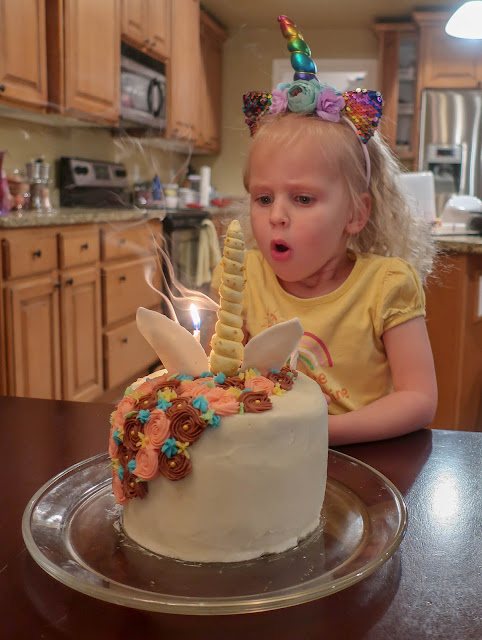 It's hard for me to believe that she's already four years old.

It sounds cliché, but it's the truth and can the truth really be a cliché?

It is hard for me to believe that she's four, that she has one more year before she starts school, that she's well on her way to being the big kid she's been working so hard at becoming. That it's been eight years since Rachel was four. That it's only two years until Alexander is four (and then there will be no babies in my house).

They're all growing up great, these kids. I'm glad we get to celebrate them every once in a while as they add another year under their belts (even if we don't add any letters to their names).
Posted by Nancy at 2:31 AM