The week before the other children got out of school, Zoë had her preschool graduation.

I can be a bit of a stick in the mud when it comes to pomp and circumstance. I suppose it's...neat...that we finished an entire year of preschool, but I honestly believe all these children would have learned their letters and numbers and colours and such anyway. Because that's what children are ready to learn at this age and because they all live in generally stimulating environments (as evidence, I offer the fact that all of their mothers took turns teaching this preschool).

Also, all these children have another year of waiting before they get to start kindergarten so they aren't technically advancing from anything. So what's there to celebrate?

This is probably why I wasn't put on the graduation committee (which was a volunteer position (and I didn't volunteer for it because I know well my lack of enthusiasm for such things)).

However, I'm grateful for people who can get excited about things like preschool graduation. The moms in charge had hats and certificates and crafts and cotton candy and little popcorn graduation jars. It was a fun little party! 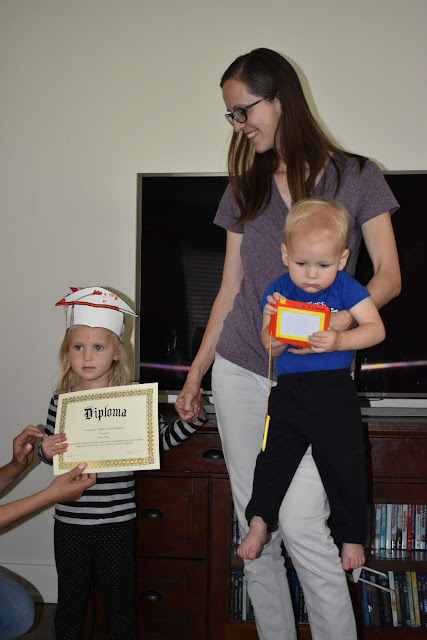 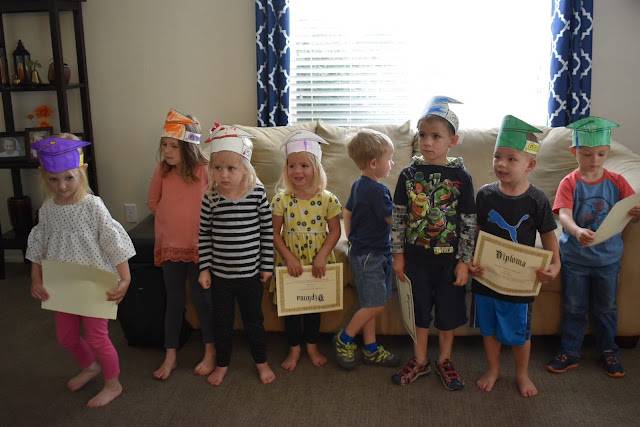 And here's Zoë with her mortarboard-bedazzled popcorn jar: 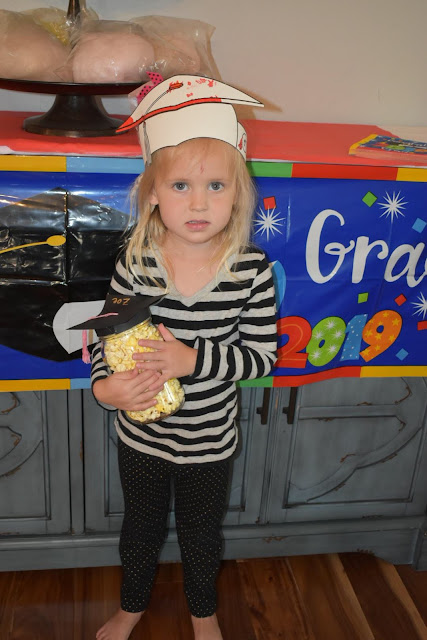 While she was colouring her own little graduation cap (obviously not an activity she threw her heart into) she asked me if she could go to preschool next year.

I honestly haven't even looked into preschool opportunities yet. Finding a house and looking at public schools has been time consuming enough for me the last little while. Plus, I figure she's already well-prepared for kindergarten (she is naturally much more interested in book learning than Benjamin was at her age (like, for example, she knows all of her letters already whereas at this age Benjamin did not care about such things)) and I happen to know that our new ward has an active play group so I'm sure we'll have ample opportunity for social interaction.

Instead of telling her any of that I just said, "Oh, we'll have to see."

"But can I go to a real preschool?" she asked. "I don't want to do another preschool with just a bunch of random moms teaching me!"

So that's what we are to her?! A bunch of random moms!

She might be a little disappointed to learn that a formal preschool will not be in the cards for her next year (Andrew looked into a few since our little conversation and they are $$$) and I honestly don't know that I'll be up for a co-op style preschool again (it's really not my cup of tea (I'd rather just teach my own child on my own schedule)) but I'm sure we'll figure out some play dates for her and next year will be just fine.
Posted by Nancy at 2:58 AM