Amidst all the months-long chaos of moving somewhere new, Alexander has continued to grow up. Today I took him to nursery (and stayed with him the entire time, which was his first time staying for the duration of the hour) and another mother brought her little girl over and said, "Here. This little boy looks like he's about your age. Why don't you play with him?"

"Okay. She was born in November. So they're close."

It's getting tricky remembering how old he is in months, which is a sure sign it's time to start measuring his age in years, which means he's getting altogether too old.

He did okay at nursery today, even playing on his own a little bit, if only he could reach over and pat my foot and say, "Mommy!" whenever he needed to. Eventually I was able to move a few feet away ("Mommy—'tay!" he commanded me to stay) and finally made it all the way across the room where I sat in a chair and reassured him every time he looked up in a panic and squeaked, "Mommy?" that I was still there. 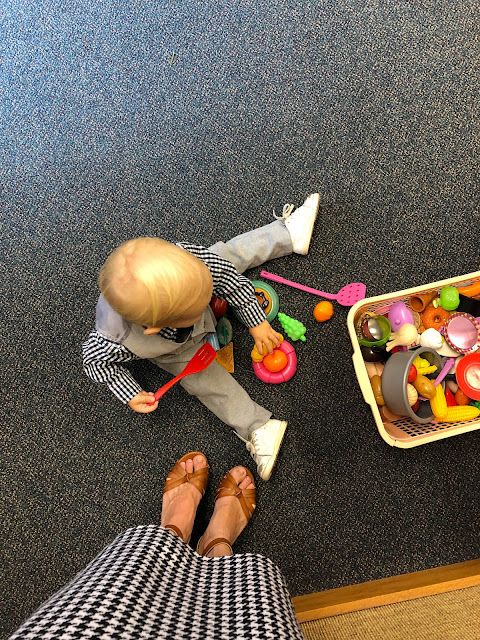 I'm hoping that after a few weeks of this he'll be more willing to go to nursery on his own (I don't like leaving my babies screaming in nursery (so much so that I would rather not send them at all than send them in screaming)).

Here he is after his long, exhausting hour of bravery (with Mommy right by his side the entire time (so brave)): 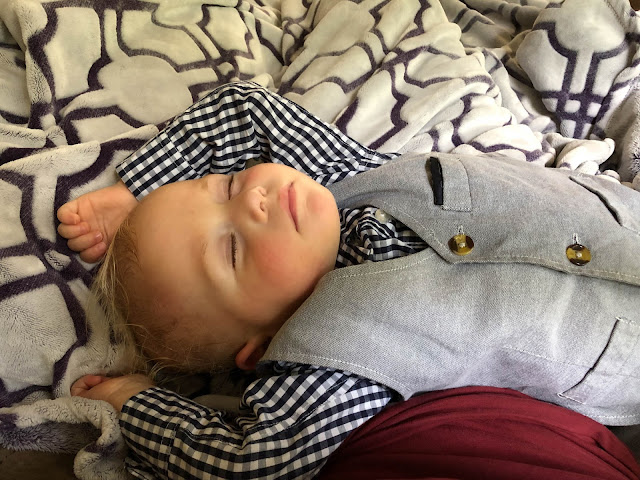 And here his is strutting up to our new church building wearing his new suit from my friend Crystal (a hand-me-down from her little boy): 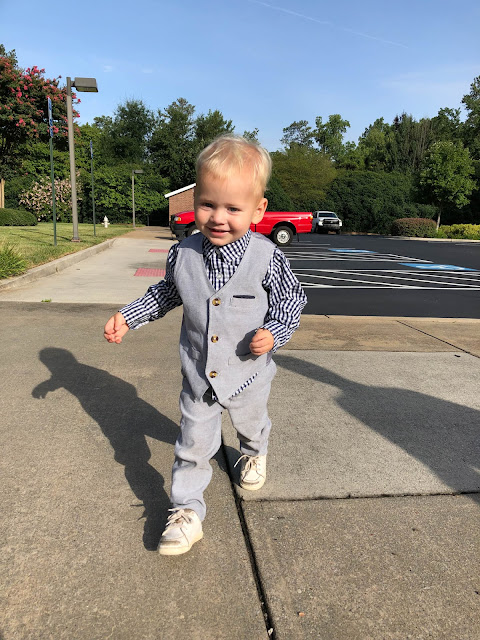 When I showed it to him this morning he picked up the shirt, hugged it, and said, "Daddy shirt!" He was so proud to wear a big boy shirt like Daddy. When Andrew asked him what kind of shirt he was wearing he said it was a "Daddy, Grandpa, Mommy shirt!" I think he was trying to tell us that he thought he looked very grown up, listing a long string of grown ups like that.

And he did look rather grown up today. But he doesn't always look so grown up.

He's developed an obsession with birds lately, specifically owls, but also all birds and anything with wings. In addition to the owl I got him for the road trip, we also got him a little owl puppet from IKEA because we went furniture shopping (to find an island for our kitchen) and he saw it and grabbed it and immediately loved it (and stuck it in his mouth and started chewing on it). So every night he goes to bed with his two "owlies." 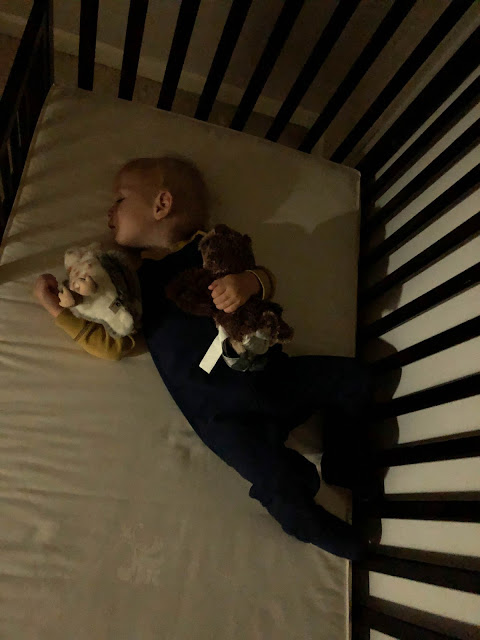 Zoë found her "My Little Pony" ponies in a box and she and Alexander have been playing with them quite a bit. But Alexander only ever wants the pegasus ponies, which are "birdie ponies."

In addition to his obsession with birds, Alexander has also been obsessing over tools lately. He loved helping us disassemble furniture when we were packing up and he's likewise been enjoying helping us reassemble everything. He is saying several new words every day, but one of my favourite words that he says is "screwdriver."

He also says "tools" and "hammer" and will parrot pretty much anything Zoë or Benjamin says (though he won't speak on command and will instead answer with "no" or absolute silence when you ask him to say anything specific). Words he uses a lot are:


That's 60+ words (and can identify many, many others) so he's right on target. He likes to get someone's attention before speaking to them (for example, he just said, "Mommy! Ball." when he wanted to show me a ball). He's combining words into simple sentences (or combining words to express a complex idea, even if it doesn't quite make a sentence). This stage of rapid language development is fascinating to me.

He still babbles quite a lot, which is fun. I'll have to find a recording of his babbling because it's just so cute. He says something like "luku-luku-luku" over and over again, with a smattering of real
words thrown in there. "Hi. Luku-luku-loku. Bye," is what he says when he pretends he's talking on the phone. Or he might say something like, "Loku-loku. Birdie. Owl. Loku-loku-loku. Fly."

He loves music—singing, dancing, watching music videos. One of his very favourites is Baby Shark, which he'll sing all on his own while doing the actions. "Baby! Doo-doo-doo! Mommy! Doo-doo-doo! Daddy! Doo-doo-doo!"

He loves (loves, loves) putting on lotion. He can open just about any kind of container there is (which can be very frustrating at times). He loves playing in water (and wood chips and sand). He likes to read his favourite stories (Please, Baby, Please by Spike Lee and Tonya Lewis Lee is so much his favourite that we might need to get another copy because ours was a prize from a Cheerio box and has just about been loved to death; he also likes books that feature birds (surprise) and other animals (such as Brown Bear, Brown Bear and stories of that ilk)). We're working on helping him develop a longer attention span for story time (right now he usually sits for only one or two stories before hopping down to play).

(Even if he still has yet to sleep through the night (seriously, what I wouldn't give for, say, three consecutive hours of sleep (he's in such a terrible way right now; I'm sure a lot of it has to do with struggling to make such a big transition in his life but...Mommy is tired))).

Oh, one last thing that I remembered that he does! When he's nursing and he wants to switch sides he simply says, "Way!" And I'm not quite sure why. He says "way" when he throws things away as well. So I think, perhaps, he means, "Put this side away, but by no means are we finished nursing yet. I want the other side." Because he only ever says it to switch sides (which I always say—"You want to switch sides?"—so I don't know why he's settled on "Way!" for this) never for "all done."
Posted by Nancy at 3:33 PM