The toilet in the hall was leaking when we first toured the house, but "that's an easy fix" our realtor assured us. Besides, the inspector would probably add that to his list of problems (which he didn't), but the previous owners mentioned something about planning on fixing it (just as they had a shower knob that broke between our visits to the house) so we didn't think much of it until it still wasn't fixed when we did our final walk-through.

A leaky toilet isn't really a good reason to not buy a house, however, so we went ahead with the purchase. Plus they left the kit to fix the toilet innards in the bathroom cabinet for us, so clearly they had intended to fix the toilet but had simply run out of time.


They had been intending to fix the toilet but it ended up being much more complicated than they had figured because it would require (a) removing the over-the-toilet shelving, (b) trying to unbolt the tank from the base to get to the gasket only to discover that the bolts were completely fused together with rust, rendering a fix impossible.

At this point we decided to just bite the bullet and buy a new water-efficient toilet. The toilet in question was older than either of us (circa August 1982) and we couldn't help but wonder how many butts had sat on it over the past 37 years. Surely a vast number.

So with the environment (and heebie-jeebies and federal rebates) in mind we replaced the hallway toilet.

Not only were the tank bolts fused together, the floor bolts were as well. We worried we would have to saw the bolts off but in the end we (and by "we" I mean mostly Andrew) managed to wiggle them free with the help of a wrench, two pairs of pliers, and a couple of elastic bands (the elastic bands were crucial to the project, allowing adequate grip on the bolt). Once we got the toilet up, the rest was easy.

We cleaned out the old wax seal (and by "we" I mean Andrew) and installed a new "better than wax" seal and plopped the toilet on. Easy, peasy.

Here's Andrew working on cleaning up the floor: 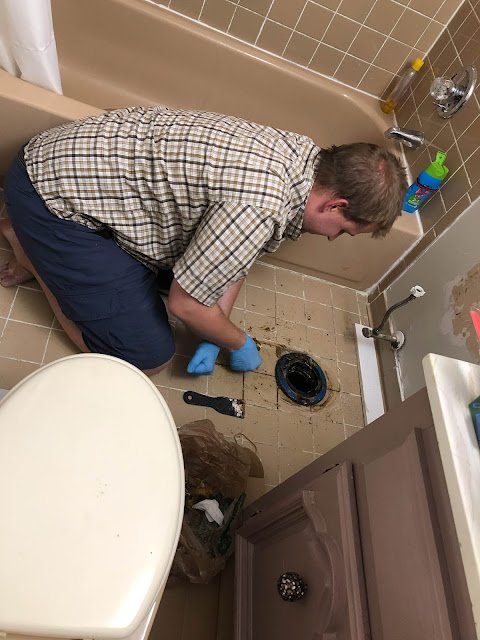 It was really quite gross. Like, so gross. So here's a picture (you're welcome): 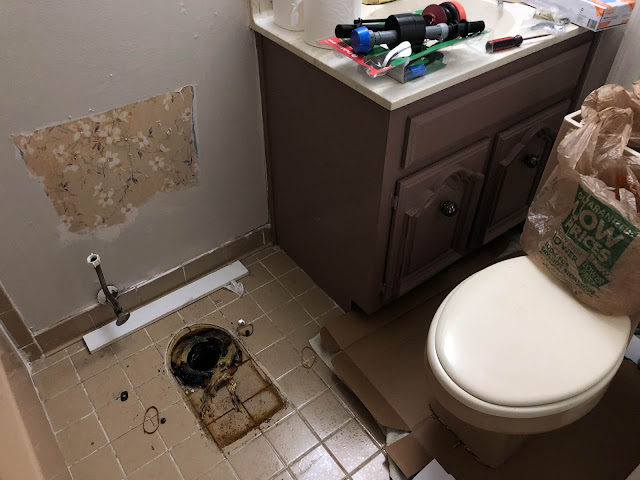 Don't you love the wallpaper some former owner painted over? All the bathrooms have wallpaper that's been painted over, so that's fun. But here's our new beautiful toilet (that doesn't quite cover the area previously covered by the tank, so there's a bit of wallpaper showing): 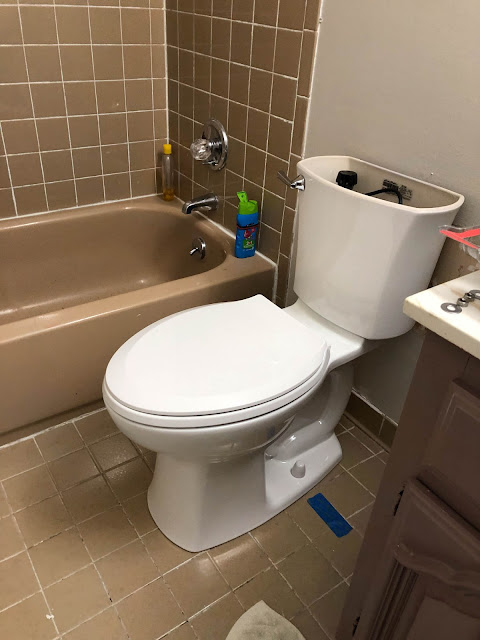 It was so surprisingly easy that we decided to tackle the toilet in the master bathroom as well. It wasn't leaking (it had clearly had its innards replaced at some point) but was older than the other toilet (circa August 1981 this time) and was definitely not water-efficient.

This second installation went much faster. It only took about an hour instead of, like, all day. And it was considerably less gross than the hallway toilet (almost as if it saw less traffic—that's the joy of a master bathroom, I guess). 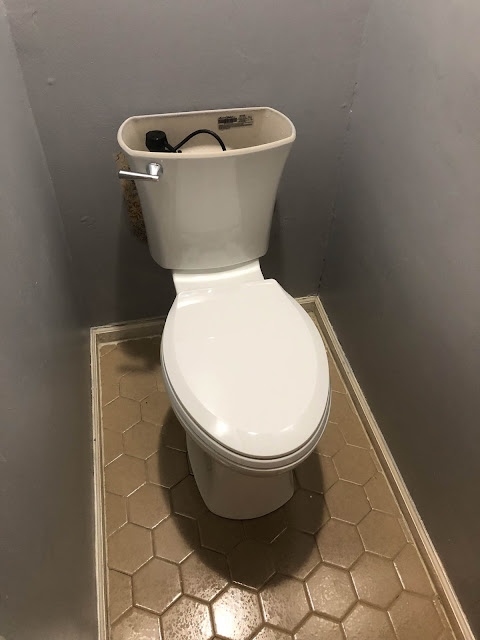 So now we have two new toilets in our house and two old toilets sitting on our porch, which I had to take a picture of because "what kind of dork would leave a toilet on my porch?"* 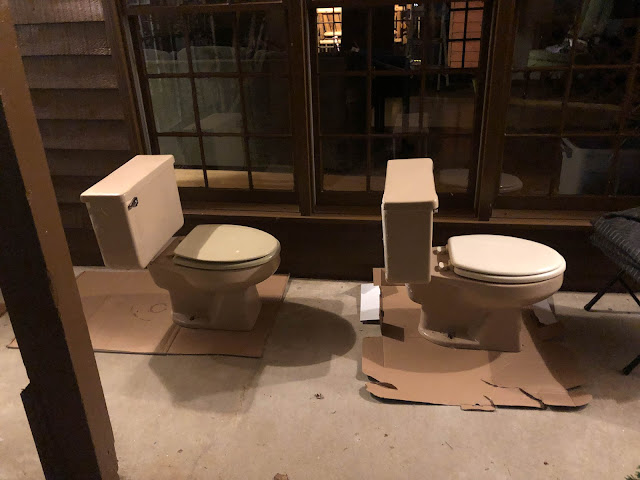 One that loves me enough to scrub off the nasty remains of 40-year-old toilet wax—not once but twice in one day—I guess!

Oh, so, while we were fitting the gasket to the first toilet tank, I couldn't quite get it on and said something like, "It's supposed to go on all the way, right? Like, there aren't supposed to be any gaps or anything..."

"Yes, you're supposed to make it..." Andrew paused here for dramatic effect before getting to the punchline: "FLUSH!"

That's just the kind of humour I like. He knows me so well.

* See also here and here for more posts about toilets and our ever-growing love for each other.
Posted by Nancy at 12:21 AM