I suppose with two weeks and two awards under our belts, it's time I officially announce that we've gone back to school.

Miriam and Benjamin leave bright and early in the morning. When they take the bus we get to watch the sun rise. Sometimes they catch a ride with Daddy on his way out the door and then they don't have get up quite so early. I wish that it was socially acceptable for them to ride their bikes to school because (although hilly) it's really not that far. But it's simply not, though at their elementary school I could probably fight for the right.

At a neighbouring elementary school, this is the policy in their student handbook regarding biking (and, actually, also walking (just replace "bike" with "walk")):


Riding a bike to and from school is a privilege reserved for fourth and fifth grade students only. (Exception – younger students who are accompanied to and from school by a parent or guardian may ride a bike; parent should meet child at the bike racks in the afternoon.)

We do not encourage bike riding to and from school due to the high volume of car and bus traffic in and around our school campus.

Thank goodness our elementary school isn't so strictly against pedestrian traffic (though, I mean, you saw what we went through to get permission to allow our children to walk). Dare I explain to them that much of the vehicular traffic around the school could be eliminated if they encouraged students (and parents) to walk or ride their bikes instead of being chauffeured?

Anyway, here are Benjamin and Miriam waiting for the bus on the first day of school: 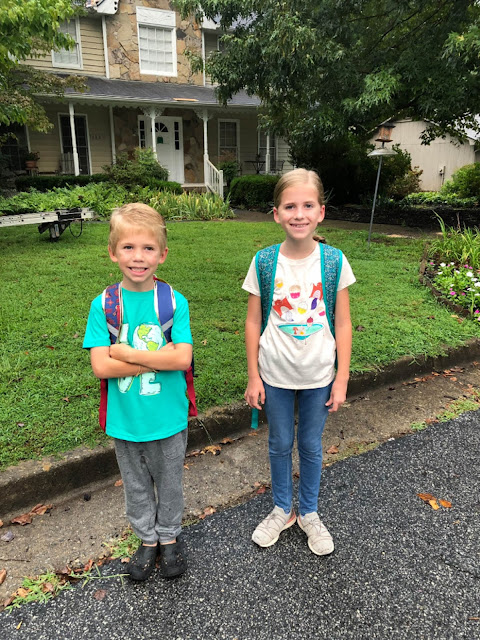 Benjamin seems to be enjoying his classroom and his behaviour has consistently been wonderful (we get daily reports home, which seems like overkill, but I suppose it's also good to know). Magically, his behaviour at home has also been improving. It's not perfect, but it is much better. He still gets wild, but he's also able to be...normal seven-year-old boy.

Yesterday during sacrament meeting he just...sat reverently...the whole time. He didn't bug his sisters, he didn't wiggle off the bench, he didn't talk too loudly (not even once). It was...weird (and nice).

Miriam's file was reviewed by the "focus" teacher (that's what they call their gifted/talented program, which I like because I hate calling it "gifted/talented"). She has to retest Miriam (because gifted students can only be pulled if they were identified within the Georgia education system (because Georgia is special like that)) but having looked at her past scores on indicative tests, she feels confident Miriam belongs in her "focus sessions."

So Miriam had to switch classrooms to be in the one classroom where "focus students" are pulled from. Why they can't pull focus students from all classrooms, I don't know. It's just the way it is.

She has "focus sessions" the first and last periods of the day and is with the rest of her class for the remainder of the day. I think it will be good for her, especially to be marked in the system before middle school starts. It's been quite the upheaval for her—starting at a new school and then switching classrooms one week into the school year. She's handling it well, though.

On Friday both kids came home, announcing that they were the "Bear of the Week" for their classrooms: 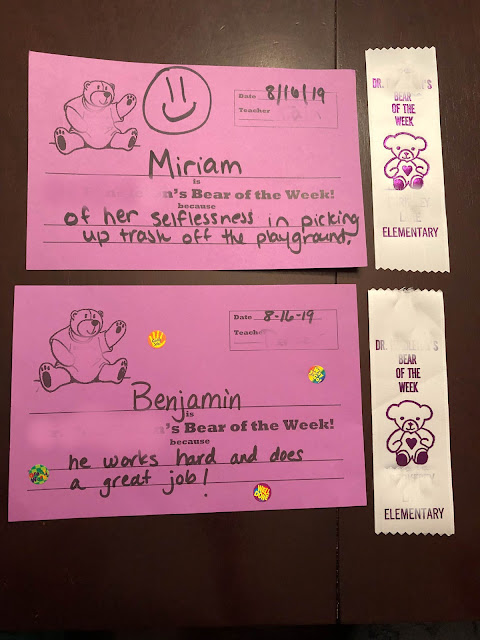 Here's Rachel on her first day of middle school. 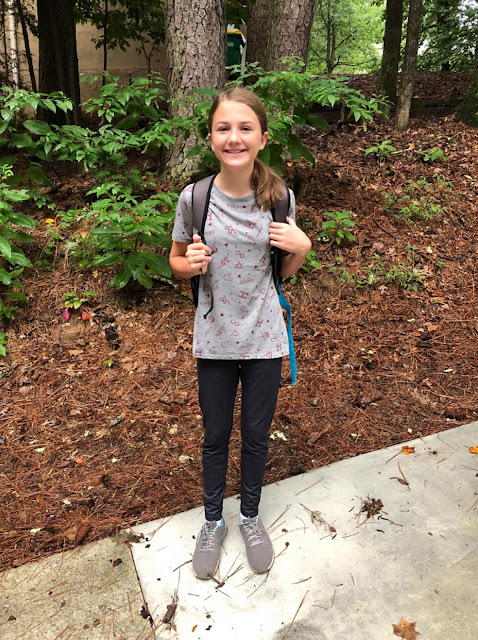 She felt like she was floundering the first week of school—so lost in such a big sea. But I think the second week went better, though there are still a few kinks to work out. I emailed her teacher about how gifted/talented programs work, since I noticed that the "gifted" identification didn't "follow" my kids from their previous schools. He had the principal call me back and she said they're a little more flexible in middle school, so while she didn't think Rachel should be moved to an accelerated math class (based on her pretest scores) she said it was possible Rachel might need to be moved to an accelerated English or social studies course.

Once again, Rachel will need to be formally tested for the gifted program (which, I kind of get, but also I don't get because they are going to have her take the very same tests that she took to be identified as a gifted student out-of-state...she just has to take them in state...but they're national tests?) but based on her pretest scores for English and social studies they've preliminarily moved her into the accelerated classes.

That meant a schedule change for her, which she handled gracefully.

We're still getting used to all the websites and things she (and the younger kids, actually) have to use to turn in homework and so forth. It's all a little wild (and, like, terribly done—like the platforms are difficult to navigate and rather counterintuitive, but I'm sure we'll get used to it).

Rachel doesn't get off the bus until 5:00 in the afternoon, which is wild. We're having trouble working in any sort of real family time since the younger kids have to go to bed rather early to manage their wake-up schedule, and then Rachel's schedule is so much later. But we'll figure things out.