Things from this week

I took a page out of my friend Crystal's book and said no to something.

Last week I was invited to participate in a little preschool co-op with some moms at church and I was on the fence about it the entire weekend. I was excited because here was an opportunity to make new friends and be social but I was not excited because socializing exhausts me and I don't really like teaching preschool. But I went to the planning meeting anyway.

When they asked why I was on the fence I said that I don't really like formal preschool. I don't like being boxed in to a set theme or "letter of the week" when those are things children these ages are naturally learning. They all know the colour red and the letter A and spending an entire day teaching about that is boring and counterproductive.

They said that I'd have freedom to do more exploratory lessons, but in the end I said I was just too tired for preschool this year.

The past couple of years have been amazing (just kidding: they've been rough) and all, but I kind of just want to relax, settle in, and enjoy my little ones while they're still little.

Plus, this preschool meets for four hours. I don't want to have to entertain a handful of preschoolers for four hours at a time (even if it means I get a "break" from my own four year old on my off weeks). I am literally just too tired to deal with that. I mean, I tried teaching kindergarten once and it was, like, fine, I guess. But I didn't become a kindergarten teacher, now, did I?

Also, my house isn't set up to accommodate a preschool group yet, anyway.

(When will the unpacking be done?!)

So I said no and I felt better (because I have intensely disliked every preschool (co-op or otherwise) that we've participated in) but I've also been sitting at home worrying if I offended everybody.

My kids were so clingy the entire time we were at this house for the preschool meeting—even though there were toys and kids everywhere—but then I took them to the library and they ran off to play together and wanted nothing to do with me. Silly kids. 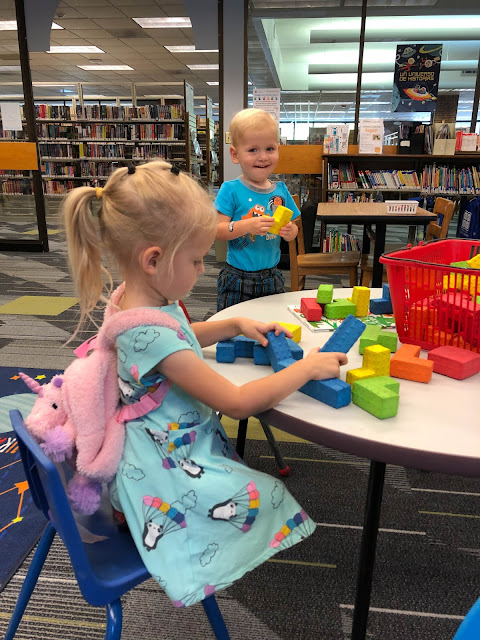 I'm pretty confident I can have Zoë ready for kindergarten (ridiculous that a child needs to be "readied" for kindergarten, but here we are) if only I can find my Teach Your Child to Read in 100 Easy Lessons book. Guys, it was one of the last things I packed and I was like, "Surely I will remember which box I packed this in because it's one of the last boxes I'm packing, which means it will be one of the first to be unpacked." But it has yet to surface. There's time. We'll find it.

For now I've been embracing as much freedom as I can, while feeling awfully choked by school schedules and policies and a culture of fear. I'm trying to work up enough bravery to ask if I can run a "play club" at the school—a club where the school grounds are just open for kids to play around after school because we need community exploration time. One short recess doesn't cut it.

But asking permission is going to require a lot of bravery.

Though, I did find out that this mom who invited me to the preschool has a boy in grade five who rides his bike to school (not our school, a different one) for early morning clubs. They live two miles from the school. I was like, "A kindred spirit! Do you know what I had to go through to allow my kids to walk?!"

"I'm kind of a renegade," she shrugged. "They probably hate me, but what can you do? I'm not going to take him to school early."

Letting kids take risks is so, so important (she says after not taking the risk of joining the preschool co-op, but honestly I have learned to not take that risk after taking it a few times before).

Here is a picture of the climbing apparatus at the park (which has a sticker stating that the park is recommended for children between the ages of 5 and 12): 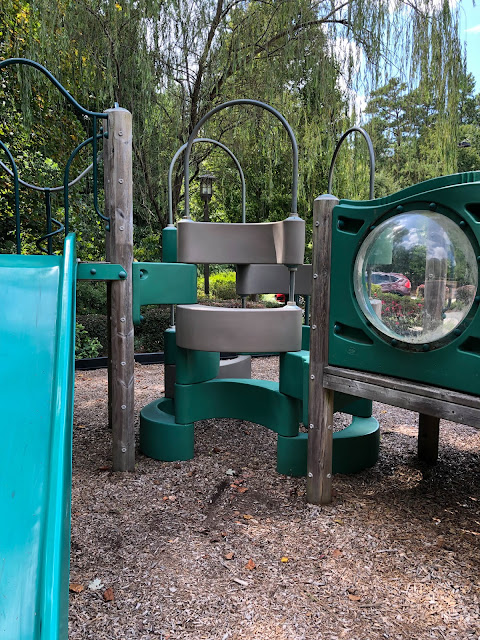 Alexander can make his way across that middle section (so he can go down the slide), which is both terrifying and awesome. He's typically pretty good at focusing on his task, but as we drift closer and closer to the terrible twos he's starting to develop quite the bossy bone and is unafraid to voice his opinion about things.

So it was that as he was crossing over he allowed himself to be distracted by Benjamin who declared, "I'll beat you to the top of the slide!"

"Oh, baby, be careful!" I cautioned from the sidelines. "Don't worry about Benny. Worry about yo..."

And suddenly Alexander found himself face down in the wood chips.

I could tell from his cry that nothing was broken (because, well, I've heard what he sounds like when something is broken (side note: how did he fall from that height and break zero bones but he broke a limb crawling across his floor?! This will forever be a mystery to me). He was not happy, however, but soon recovered. 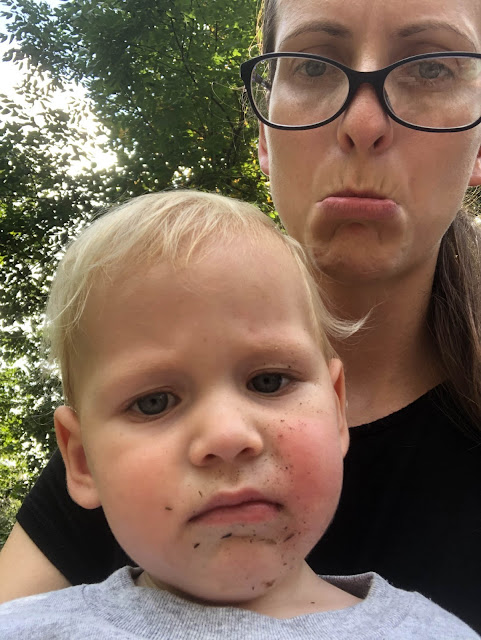 We had a little chat about worrying about ourselves (like, honestly, if Benjamin beats Alexander to the top of the slide, life will move on far better than if Alexander throws a temper tantrum in the middle of crossing a perilous portion of the playground). He probably understood 2% of our conversation, so hopefully the wood chips were able to get through to him loud and clear.

Here's a picture of Zoë swinging from this "telephone" in the park, just for fun: 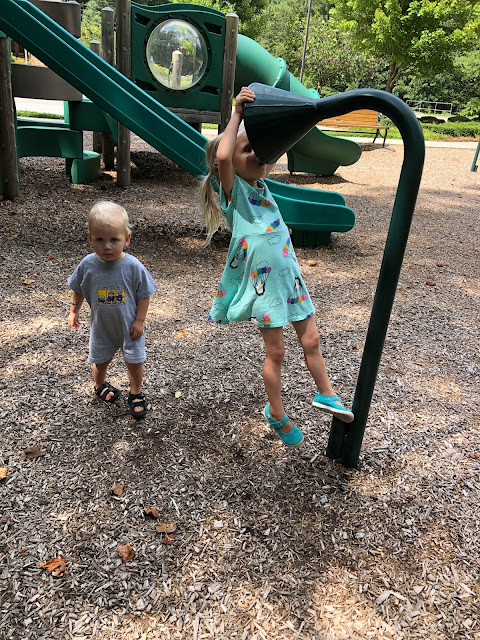 When I was at one (of three) back-to-school nights for my kids, I overheard some parents arranging a carpool for their fifth graders to get to different extracurriculars (I was sitting at their table, so I had little choice but to overhear) and one of the moms said, "We can pick her up that morning and feed her breakfast and..."

"Oh, she makes her own breakfast these days!" the other mom said. "We started getting those little oatmeal packets and she loves it. She can cook them all by herself! She measures and pours and puts it into the microwave and everything!"

I couldn't help but giggle to myself about that because although things sometimes get smokey (and a little flame-y) at our house, my kids have been making themselves oatmeal from age three.

I just feel so stifled for my children, which is not to say that I don't appreciate the public school system. It's just...we've got to make things a little less stifling somehow. We've got to stop putting kids in desks for hours on end and allow them time to explore their world and just...be kids. Because that's how kids learn the most.

For our risks today, Benjamin helped me create a "lifesaver" ring around one of the trees in our front yard. They've been neglected for many years and are covered in English ivy, which—in this climate—isn't a good thing (though it's less of a problem in the UK so you'll find conflicting advice online). We had to chop through the vines all around the base of the tree so that the vines covering the tree will die and fall off. Benjamin had a blast using the saw. I did my best to not harp at him to be careful.

"Oh, be careful!" I'd catch myself saying, so I'd quickly append my caution with: "...that you don't get the tree with that blade. We only want to cut the vines!"

When really I was worried he was going to slice his leg open. But, like, he knew he was holding a saw. He was being careful and didn't need me nagging him (even though it's hard not to nag him).

While we were doing that, Miriam (who had swept off the back porch) asked if she could make a treat (which I told her she could do if she first cleaned the kitchen) and settled on making banana smoothies. So she found a recipe, used a stool to get the blender down from the top shelf in the kitchen (which is tall), made a nice cold smoothie, and brought some out to Benjamin and me (we were both dripping with sweat). And even though I don't particularly like bananas, I thought to myself, "Score! This is why you let them microwave oatmeal at age three!"

I don't really know where I'm going with this, so we'll just move on.

Here's a marble run Benjamin and Zoë worked together to build after school one of the days this week (must have been Wednesday, judging from what Alexander is wearing (you can't tell from what Zoë's wearing because she tried to wear that dress every day this week (and definitely wore it more than once; I basically had to smuggle it into the laundry basket))): 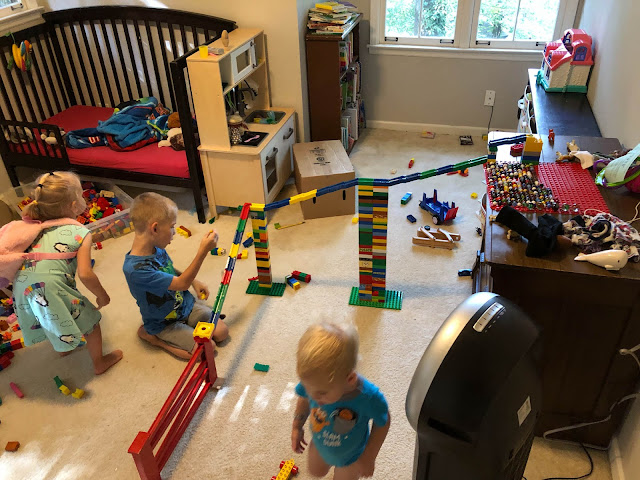 It goes from the dresser down to the marble run that Grandpa Anderson made, and which we inherited before we left Utah. At some point Grandma had collected several of these marble runs, enough to give to each of the kids. I know because she showed them to me once and told me that she'd planned on doing that. But we never got one, so here's hoping everyone else did... Otherwise I don't know what she did with all those marble runs; she must have given them away somehow or another.

This one, though (I believe) is the original one that Grandpa Anderson made for Grandma (and her children) to enjoy and now our children are enjoying it. So much.

It's Alexander's favourite thing right now. He talks about it all the time and always wants people to play it with him (or at least supervise so he's allowed to play with it because we still worry about marbles a little bit).

Today he started climbing up the stairs, coaxing me to come with him, saying, "Marble run! Play marble run! So happy! Happy marble run!"

How can one say no to that?!

And here he is being super bossy about the marble run (shaking off the marbles that I put on because only he should be able to do that and yelling at Miriam for entering his room, lest she try to play with him (even though the other day when she tried to stop playing marble run with her he yelled, "No! Stay! Play marble run!" at her)):