I can't remember how it came up but last night at dinner we spent a considerable amount of time trying to say "red leather, yellow leather." As far as tongue twisters go, this is an incredibly difficult one, at least for our tongues. I think the most times anyone ever managed to say it without messing up was 2.5 times.

Poor Miriam couldn't even get it to come out right once.  She kept saying, "Red yellow leather leather."

This morning at breakfast, Miriam asked James (who—surprise!—stopped by on his way to Florida (I mean, it wasn't a surprise to us, but it might be a surprise for you; he drove the car out (April and the baby flew))) if he could say—and she paused to enunciate very slowly and carefully—"Red leather, yellow leather."

"Then say it!" she demanded.

And we all nearly died of laughter at the table.

It's amazing how it just seems to turn your tongue numb!


Visiting with James—even for the short time we got to—was so fun! I wish instead of moving to Florida he and April were moving next door. But Florida will have to do, I guess.

Anyway, the kids were still trying to say "red leather, yellow leather" when I picked them up at the park after school. We laughed about it the whole way home. And then Miriam scrawled it on the white board in the living room (because if she can't say it, she may as well write it).

In the evening, Andrew fretted aloud about the syllabuses he has to get ready. School starts for him on Monday! He had one class mostly done, but his other class was just bare bones and he was feeling rather nervous about it. I told him I could draft a "silly bus" in no time. 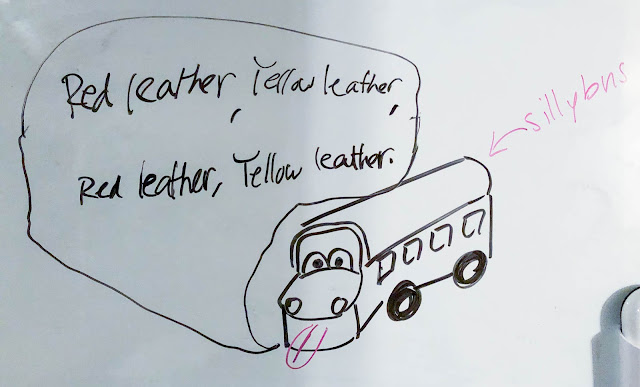 And I honestly don't know what Andrew's so worked up about.

Silly buses are quite easy!
Posted by Nancy at 12:19 AM