Besides the chaos of life, in general, I think one of the reasons I've been struggling to write very much during the day/week lately can be summed up by this picture (which Rachel snapped while I was helping her figure out some homework): 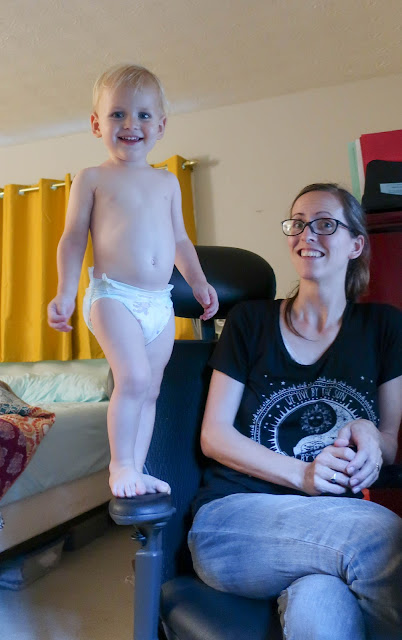 Alexander loves to climb all over my office chair.


When I'm on it he either climbs onto the headrest behind me, or onto the armrest beside me. And then he wants to balance all on his own, sometimes chirping, "Take pic-tur me! Take pic-tur me!"

It's slightly terrifying (not to mention the fact that it makes any sort of typing or computer work very difficult to manage).

When I'm not on it he likes to get it spinning and then climb up onto the seat so that it keeps spinning him around.

So I can basically only write while he's sleeping, but since he's still not sleeping through the night, I often find I need a nap when he finally goes down for a nap (he napped for a whole half hour today, though I didn't get to nap while he was sleeping today) and at night I have other things calling to me: laundry folding (which I also can't do while he's awake and running around because he likes to "help" and it's just...less than helpful) and major organization projects (that I've also put off trying to accomplish during the day because he's...relentlessly underfoot...these days).

And this story doesn't have anything to do with the above, but remember how when he's nursing and he wants to switch sides he says, "Ubby way, please?" which, roughly translated, means "Other side, please?"?

Well, at dinner the other night we had pigs-in-a-blanket (elegant, I know) and he ran out of ketchup and instead of asking for "more" as he's often done before he held out his dish and said, "Ubby way—sauce!" (Though, of course, he didn't say "sauce" with an initial /s/ because for some reason he doesn't say initial esses). We thought that was pretty funny. So "ubby way" is a stand-in for "more" these days, I guess.

Lately he's also started calling out, "Where are you?" (usually about me (not that I'm vain; I'm simply in high demand around here)). He kind of slurs it all together into one word, though, and calls out, "Mommy! Whey-ah-oo?! Whey-ah-oo?!"

It's like he's heard us all say that phrase (because he has) and figured that it's a magical summoning incantation (but has no actual idea of what he's saying)).

Oh, and in the potty training world, things are going fairly well. He often will tell me he needs to go potty just as he's going or with not quite enough time to make it to the potty, so he's still in diapers. But we're using fewer and fewer. And he's been a dream, so far, compared to Benjamin (my little territory marker).

Benjamin always seemed slightly pleased with himself for making the biggest mess possible when he went to the bathroom. Alexander is much more careful and if his stream is misdirected he will stop and redirect himself, saying, "Uh-oh! Point it down! Point it down!"

I have high hopes that he will end up being much less difficult to potty train than his brother was.

Please no one dash my hopes; I'm fond of my hopes. And rest assured that he'll give me plenty of grey hair in other ways. Like, you know, balancing on the arm of my office chair...
Posted by Nancy at 9:36 PM