Spooky Vibes, or, While you weren't sleeping

It's just past 10:00 pm and at our house, well, various things are happening. I just got Phoebe settled. Miriam is getting caught up on some "hand" dishes (the ones that won't fit into the dishwasher at the end of the day). Rachel is...crocheting...I think. Benjamin is listening to War and Peace because he finds that having an audio book streaming through his mind helps his mind quit racing long enough to allow him to go to sleep. He's done all sorts of long books—the Bible (several times), The Lord of the Rings (all volumes, several times), you get the picture. Today he asked for War and Peace and, like, whatever. It's just background noise for him. Alexander is sleeping with an armful of owls dressed up like ghosts. He is usually the first person in the house asleep.

The other day he came to me after he'd been put to bed, while I was still nursing Phoebe, and sighed heavily. So I sighed back and then asked, "What is it, buddy?"

"I just wish I had a stuffed animal that had spookier vibes."

"Yeah, because you know Halloween is coming up?"

"And I'd just like spookier vibes in my bed."

"I will," he said. "But it'd be a lot easier to fall asleep with spooky vibes."

At this point Zoë interjected in my behalf, telling him that I have a lot on my plate and that I'd get around to spooky vibin' up the stuffed animals when I could get there. I had to work! I had to sleep! What did he expect? These things take time!

The next evening...he came to visit me again after he'd been put to bed.

"I'm just checking in," he started, "About those spooky vibes. You said you'd work on them, so...how's that going?"

And I was thinking about things. I got a lot of good ideas from more creative (or rested?) individuals on Facebook—how to turn a sock into a ghost or sew a simple bat from felt—but, like, let's be real here. Getting together costumes for my kids is enough of a challenge without factoring in costumes for their toys as well.

Fortunately, I have some very special people in my life who appreciate the need for spooky vibes and they put together spooky vibe care packages for Alexander. Auntie Josie sent a little plush ghost (it's still in the mail) and Auntie K sent some little wind up Halloween monsters as well as a packet of plain white handkerchiefs...along with a note explaining that the handkerchiefs were meant to be used as ghost costumes for some favourite stuffed animals.

What a brilliant idea!

And my poor sleep-deprived brain was glad she sent along suggestions because when I first opened the box I was like, "The toys I understand. But...the...hankies...?"

So this evening we turned a few owls, a horse, a bear, and a doll into ghosts. 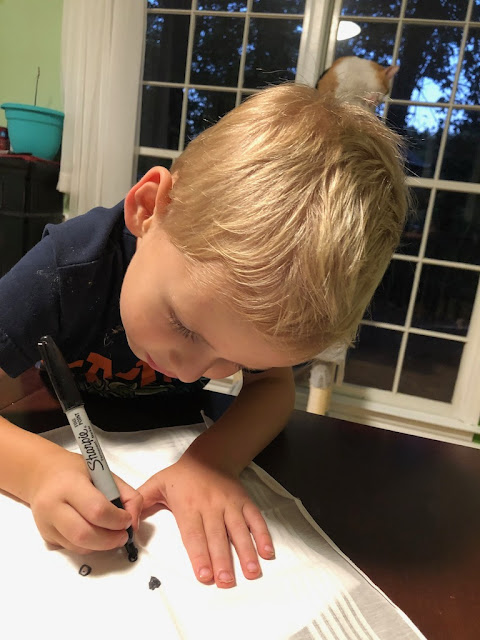 And the ghosts did not disappoint! 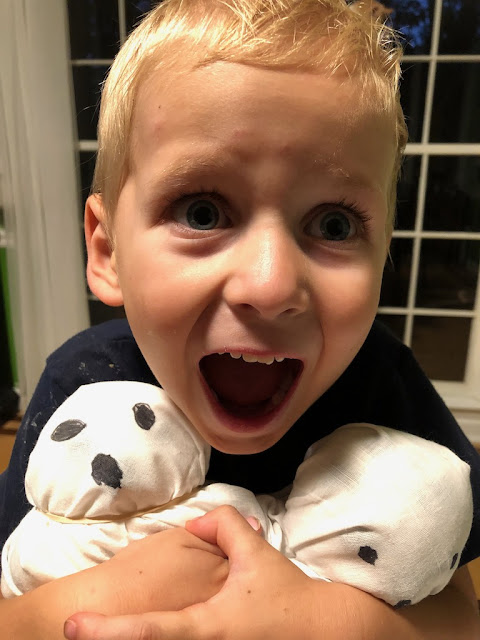 Here are my little ghost makers: 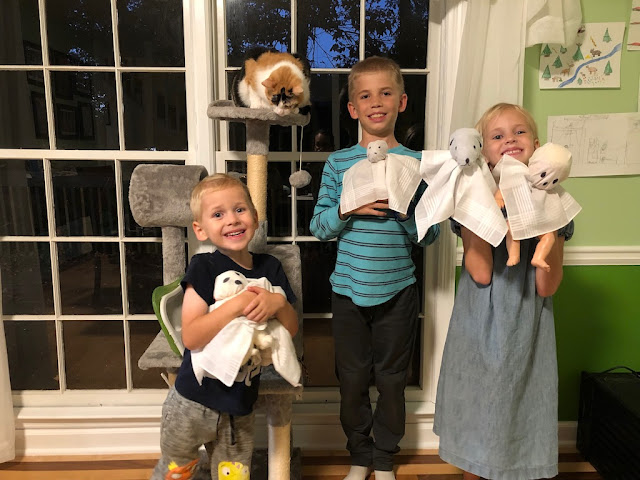 And here is a series of pictures of Phoebe coming to beg for a ghost (specifically the baby doll ghost; Phoebe loves baby dolls because, as far as I can figure, they are excellent to chew on). 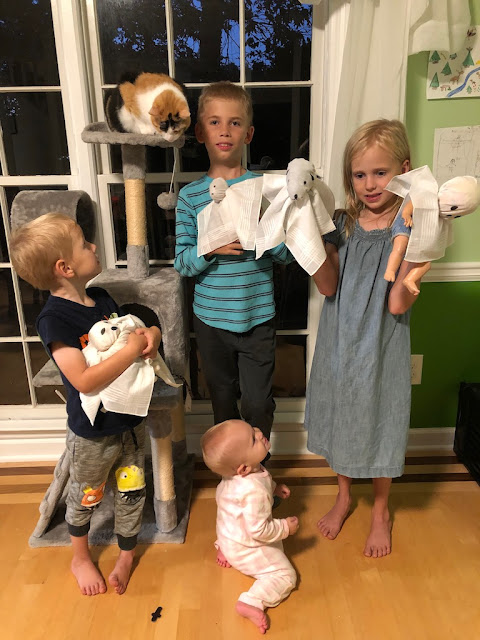 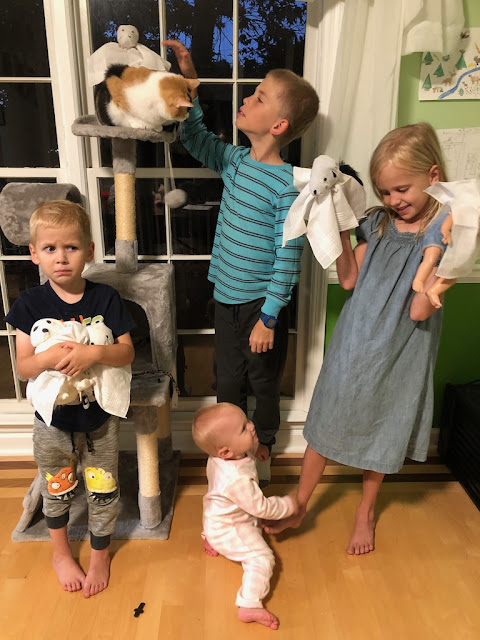 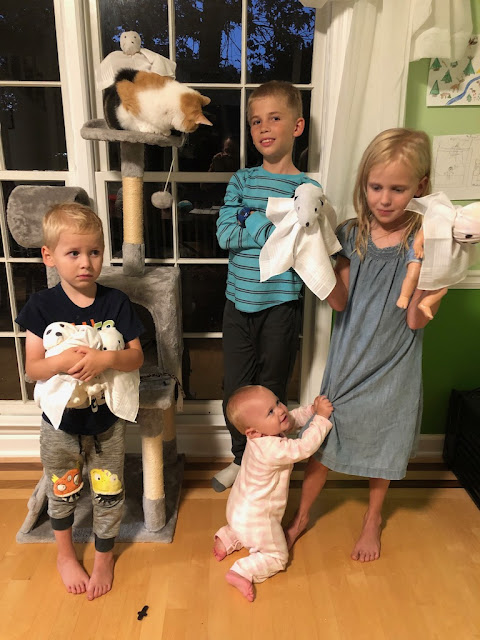 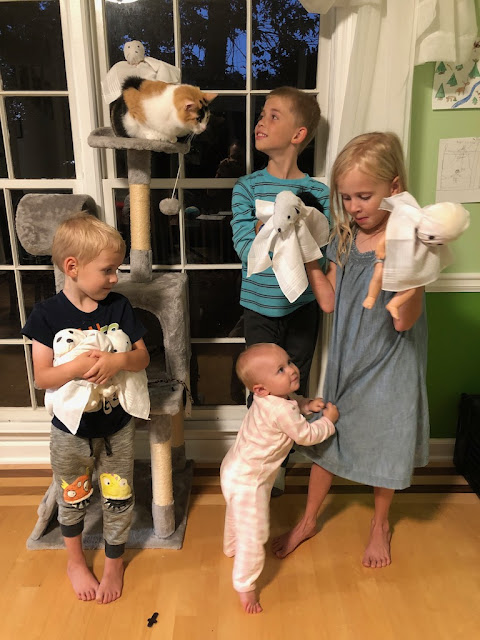 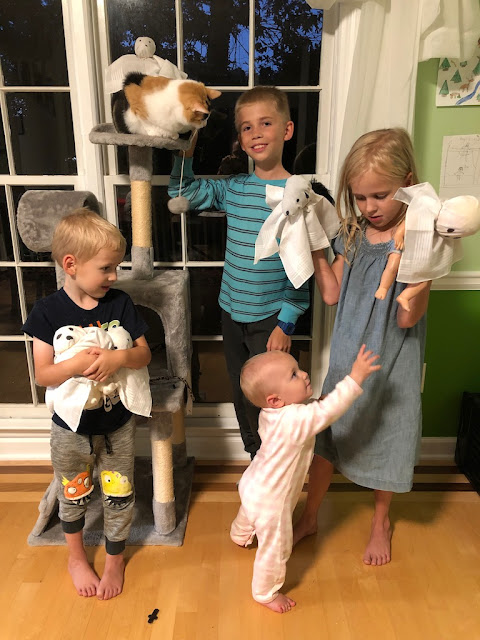 And here's Zoë saying, "Oh, you want this ghost, don't you?" 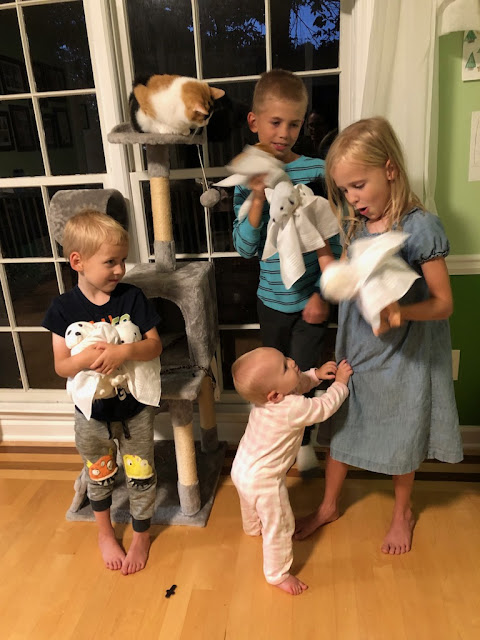 Alexander went to bed quite satisfied this evening. I haven't heard a peep from him.

As I began writing this post it was just past 10:00 pm and I received this text from Zoë:

Once upon a time, there lived a witch. She was a very young witch, mind you. She did not yet know how to fly a broom, or make magic potions. But she did know how to cook.

Now, Halloween Night was coming up and, as usual, she didn't know how to ruin the human's Halloween.

Now, do you remember what I told you? That she knew how to cook?

Well, that's just what she did!

She cooked up pumpkin pie, pumpkin muffins, and pumpkin soup! She froze pumpkin ice cream, and carved jack-o-lanterns, and set the table. She really, really, really wanted to invite the humans, but she didn't because she knew that her mother would get angry.

When her mother and siblings came home, their mother cried, "What have you done?" and fainted, because she was used to toadstool pie.

"I've made food other than toadstool pie."

And she went to put her mother in bed.

After she put her mother to bed, she kept working. She lit candles and pumpkin cake. Then it was all set.

She decided she wasn't a very scary little witch, so she changed her mind, and decided to invite the humans.

After a few long hours, she heard knocking at the door.

But when she opened the door she saw a few kids just her age, who yelled, "Trick or Treat!"

"Okay, good! I don't know any tricks but I do have treats! Please come in!" the little witch said.

"Oh, wow!" the kids said when they saw the food.

And the little witch and the trick-or-treaters lived happily ever after.

Moral: Don't get used to foods you like, for other foods are good.

This whole story is a fabulous little bedtime tale, but it's the moral that put me over the edge of adorableness.

Of all my kids, Zoë is the pickiest eater. She hasn't eaten her dinner for something like five nights in a row, at least, not anything more than a begrudging spoonful or two and whatever she figured was the plainest thing on the table—plain rice? soda crackers? bread? Tonight she ate roasted cauliflower, so that was a win, but she shunned the tomato soup.

We have in our house a spectrum of eaters:

On the one hand is Phoebe who hopes everything is edible and would eat nonstop if she could, who gets into apples and tomatoes and mangos and onions, who eats fistfuls of dirt and washes that down with toilet water, who would love a bite of whatever anyone else is having (thank you very much).

On the other hand—way at the opposite end of the spectrum—is Zoë.

Zoë doesn't like anything (not even birthday cake) and...she just wrote a story with the moral "don't get used to foods you like, for other foods are good"?!

It just made me laugh, that's all.

But maybe it means that there's hope for her...