Currently, we are reading Those Who Run in the Sky by Aviaq Johnston and in one of the chapters she mentioned throat singing in passing, so we looked up some videos about it (among other things, like facial tattoos). This one is pretty informative and has some good sound samples:
And then I had the kids write about what they'd learned. Alexander had quite a bit to say: 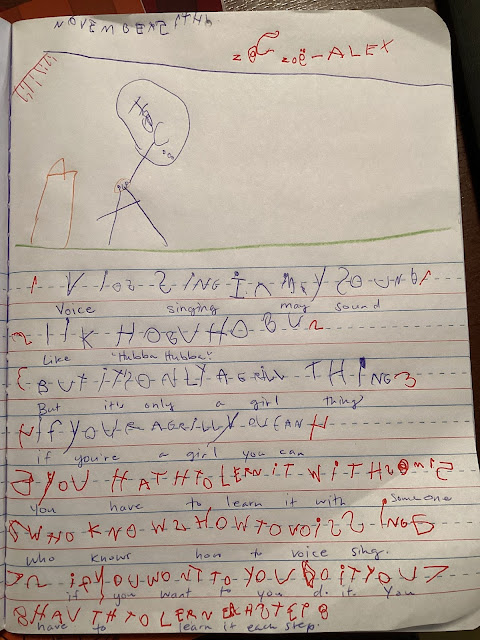 Now, I know it's controversial to transcribe a child's handwriting directly beneath their lovely sounded-out words (you might not have known that, but I've just been taking a billion courses on early writing and reading, so...), but also if I don't do it I really might forget what it says (because there's a risk he will forget what it says). I honestly don't know that it's too terribly damaging to his psyche, though he is always excited when I can read things without having to have him tell me what they mean.
Anyway, he wrote this lovely piece about "voice singing," which he really meant to be "throat singing"; he just forgot what it was called.

Voice singing may sound like "hubba hubba."
But it's only a girl thing. If you're a girl you can, you have to learn it with someone who knows how to voice sing. If you want to you do it. You have to learn each step.

Now, it's true that you have to learn it from someone (as these sisters explain) because there is no notation for this style of music. But what really got me in this story was his first line, "voice singing may sound like 'hubba hubba.'"
It's also true that this is what this singing sounds like, given that one of the basic sounds of the "game" version of this form of music making is "humma" and the two women sing "humma, humma, humma" at each other, but it was funny to me that he made that connection.
This child's context for "hubba hubba" is incredibly small.
When I snickered and said, "Hubba hubba," while reading his work, he said, "Oh, don't you remember Hubba Hubba from the attic?"
The story of Hubba Hubba

In the house that Grandpa grew up in, lived a mom and a dad, five children, an ever-changing menagerie of pets, and an old dress form. The dress form—or, at least, half a mannequin—which had belonged to...someone...who? Perhaps it was Grandma Dale. I want to say this was the case because the half-mannequin had been saucily referred to as "Hubba Hubba," and this feels like a Grandma Dale thing (though I never met her, myself). I could be wrong though. Perhaps it was Oma's dress form and it got the uncharacteristically improper nickname some way or other.
Whatever the case, the mannequin came to live in Grandpa's childhood home, where it lived in the attic. Grandpa Frank would use it as a prop to teach first aid to his cub scouts, but most of the time Hubba Hubba stayed in the attic.
All the little Heiss children were afraid of Hubba Hubba, all except for Uncle Matt. He'd move Hubba Hubba around the place, propping her up at the very top of the attic stairs, for example, to spook whatever child had been sent to fetch something. So not only were all the children afraid of Hubba Hubba, they were also afraid of going into the attic because they never knew where they might find Hubba Hubba lurking.
Uncle Matt thought Hubba Hubba was hilarious.

All the other kids were traumatized.

And that is Alexander's entire context for the phrase "hubba hubba." I think it was cute and clever of him to link that sound to Inuit throat singing. I think it will potentially be embarrassing that he has no other context for "hubba hubba" and think we will eventually have to clue him into what that means.
*****
I watched the original Hocus Pocus movie when it came out in theatres in 1993. My friend Sarah Bird's mom took us to a matinee viewing and it was very exciting because I think at that point in my life I had been to see only a couple of movies in the theatre.
Turns out I actually don't like going to the theatre very much. It's a bit of a sensory overload for me. But I did enjoy Hocus Pocus.
Anyway, the sequel came out this year and since Hocus Pocus has become such a cult classic, we just had to watch the sequel (at home, on our own TV). So we did. And it was teeny-bopper good—just fun, the kids loved it, the grown ups laughed at bits, overall pretty cheesy, but cute.
On one of our walks around Halloween, Rachel, Miriam, and I were talking about how we need to dress up as the Sanderson Sisters for Halloween one year before Rachel ups and leaves us (we just sat down and mapped out the whole learner's-permit-ACT- college-application pipeline and I'm not okay).
"But who will be who?" we wondered.
"Miriam should definitely be Sarah," Rachel said. "She's already got the blonde hair."
"And you should be Winnie, Mom!" Zoë piped up. "Because your teeth are so biiiii...."
She choked on her words as she realized that what she had planned to say might not be the most polite way to phrase things (or perhaps she remembered that she has 50% of my DNA and might very well end up with a mouthful of the same sizable incisors).
"...eautiful!" she finished. "They're just so beautiful!"
She's told me before that she thinks my teeth are ginormous. She's not entirely wrong. My teeth are prominent. But not ginormous.
(For the record, Rachel thinks my teeth are "normal, human-sized teeth.")
And those are my two (three?) spooky-themed stories. They're not really scary, but they're tangentially spooky. Especially the part about Rachel heading off to college.
Posted by Nancy at 11:00 PM