Peekaboo! (And a cute sweater)

One of Phoebe's favourite games is peekaboo, but it's usually something we play when she's getting dressed or undressed and she can use her unworn clothes to cover her face. She thinks it's hilarious to hide that way.

She doesn't have much practice hiding without a prop, evidently, because when I asked her "Where's Phoebe?" while we were playing at the park and she didn't have anything to cover her face, she wasn't quite sure what to do. But she thought quickly and remembered that she has hands! So she used those hands to cover her face: 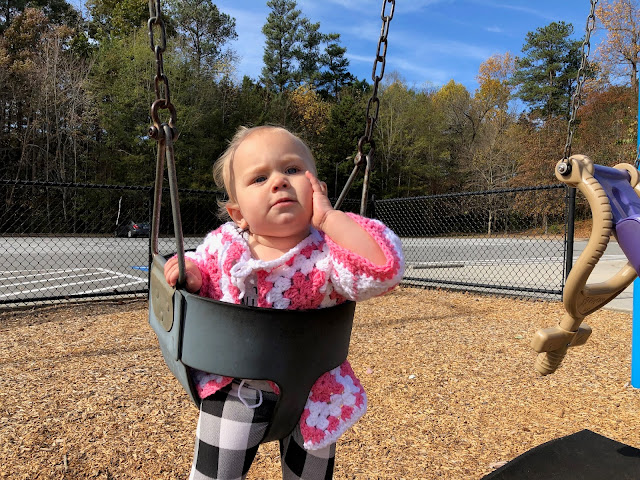 Not the most effective tactic, honestly. Cute though! 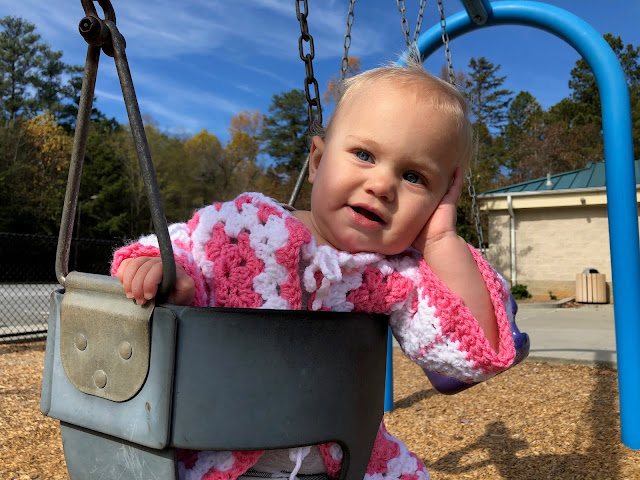 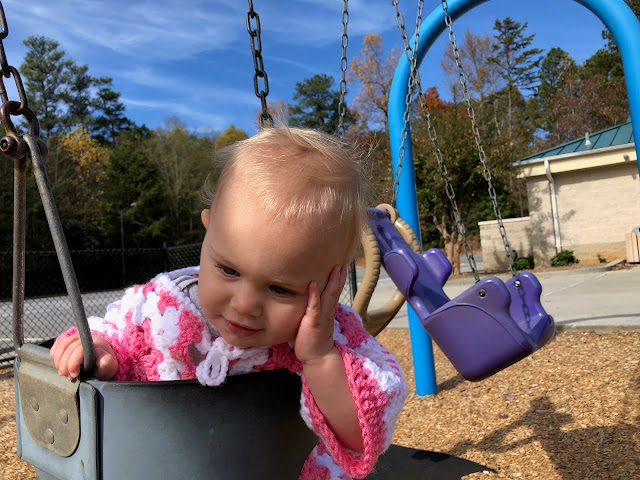 After moving her hand closer to her eyes, she seemed to realize/remember that if she closed her eyes the entire world disappeared, just like that. So, that's a pretty effective way to hide! 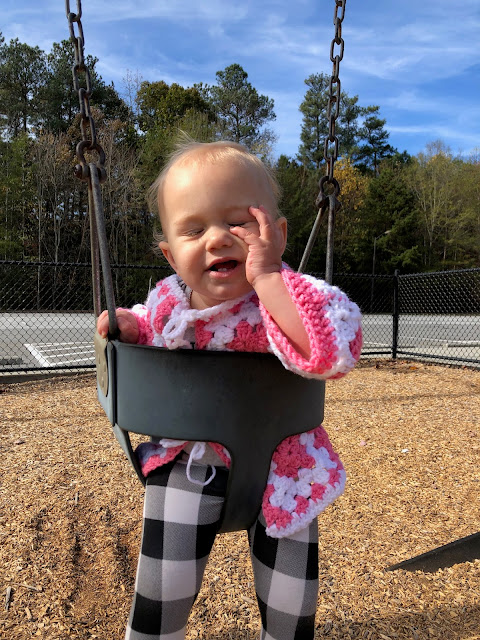 Such a sweet silly girl.
She's wearing a beautiful jacket that Rachel crocheted over the weekend. Rachel wants to make a sweater for herself but was feeling a little apprehensive about starting a project that large when she's really only succeeded at making...like...scarves...and other rectangular stuff.
And I totally understand that feeling!
So I advised Rachel to take a lesson from Mary Shelley's Frankenstein: The Modern Prometheus and start small. There's no sense in creating a hulking beast of an unwieldy project; it is wise to start small.
At least, that's one of our theories about Frankenstein. Like, why design a monster that's bigger and more powerful than you are in the first place? Wouldn't it have been better to start...small? Like with a baby or something? A child? A petite woman?
Rachel is partial to Mary Shelley—so partial that she dressed up for her as Halloween (though I made the heart for her to hold because she wasn't confident enough to venture into "shaped" crochet with adding stitches and dropping stitches and so forth)—so she took my advice and decided that she'd begin by working up a baby jacket rather than a Frankenstein's Monster jacket.
Here's Rachel working on it on Sunday morning: 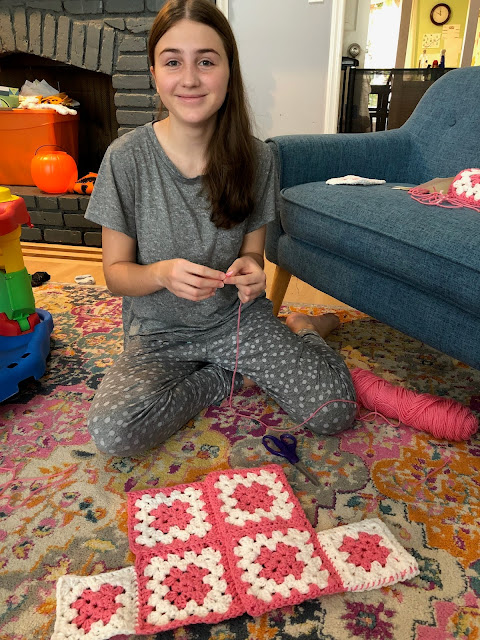 And here's Phoebe trying it on for the first time...it did not go well: 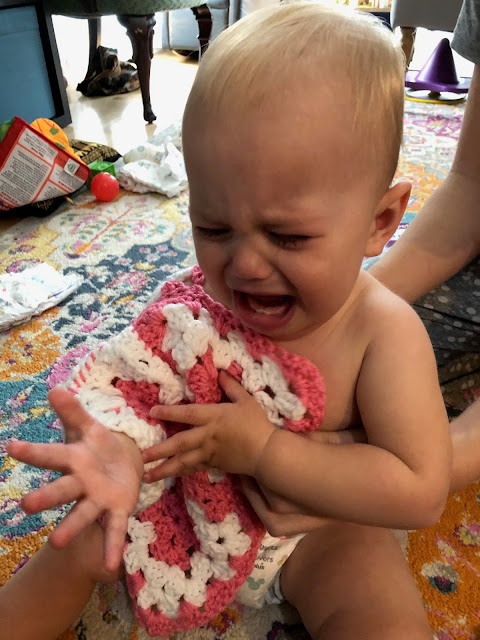 I don't know why Phoebe had such a visceral reaction to trying on a sweater. It's really quite soft, not really a new texture for her (she doesn't mind snuggling or being wrapped in the blanket I made for her, which is the same yarn, same stitch). She just...thought it was horrible...for whatever reason.
Rachel joked that it might have been because it only has one sleeve at that point. Patrick agreed that Phoebe just has strong feelings about unfinished projects.
Whatever the case, Phoebe was fine with the jacket once it had both sleeves stitched firmly in place (she also has clothes underneath the jacket, which may have helped, though...again...she has a blanket this same yarn/stitch and has been wrapped up in that whilst wearing nothing but a diaper and survived, so I don't really know if that contributed to the change in her opinion). 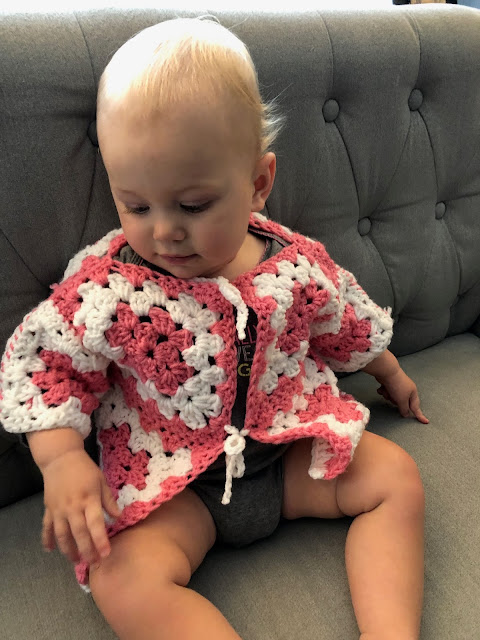 Rachel decided the sleeves were a bit short: 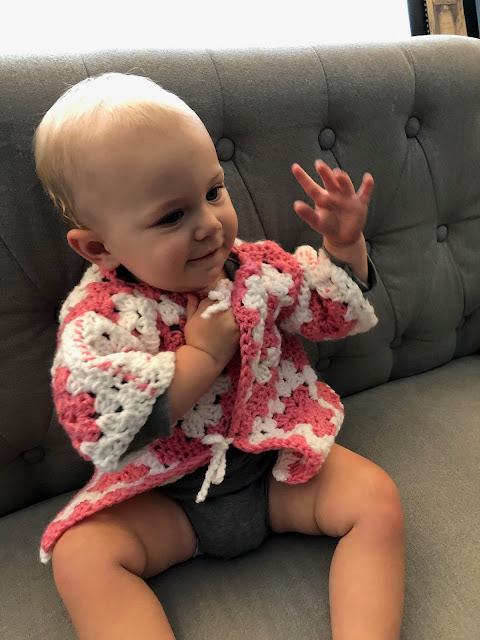 So she added a couple rows of pink as cuffs and it turned out just cute: 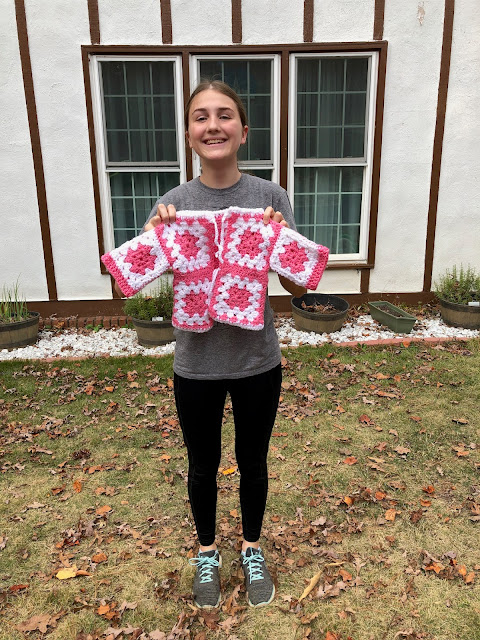 She wore it for a few minutes on Sunday, but it was like 80°F so we soon took it off of her and let her crawl around without it. But today it was finally in the 60s so it was a good day for a sweater, which is why Phoebe wore it to the park. 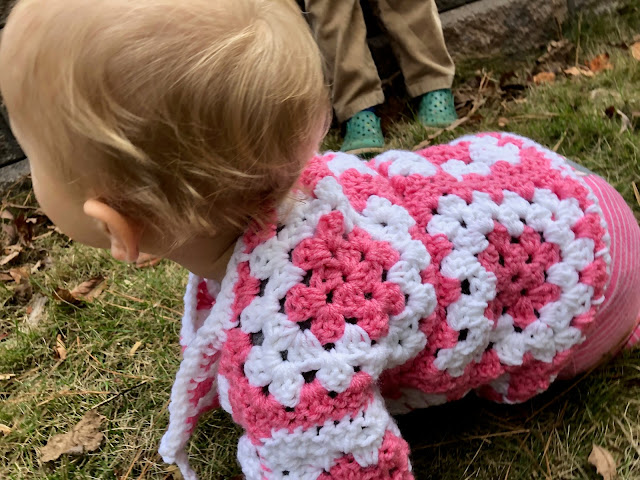 And now Rachel's ready to take on a Frankenstein's Monster of a sweater! She can do anything!
Posted by Nancy at 10:58 PM