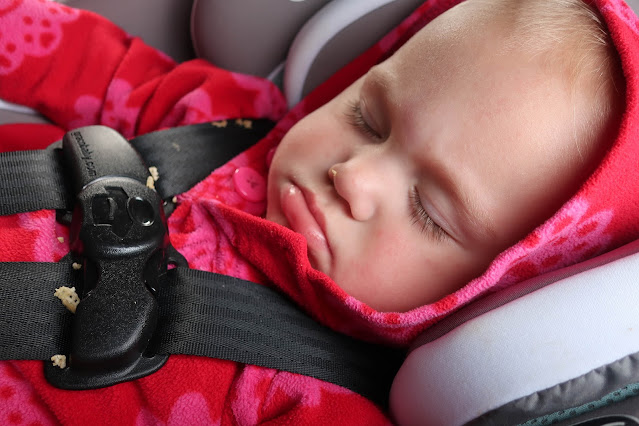 Anyway, Josie sat by Phoebe on the drive and Phoebe wasn't precisely thrilled by this arrangement even though Josie was in charge of food and everything. You can clearly see that there was definitely an exchange of food happening in the backseat, but Phoebe was only eating reluctantly, all the while shooting daggers at Auntie Josie. 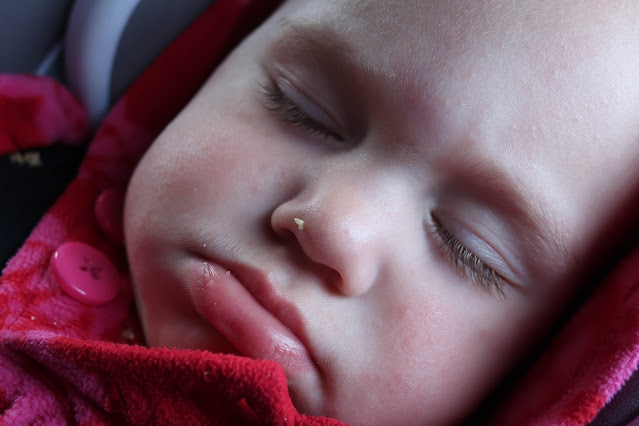 We weren't sure we would make it to Chickamauga before the visitor's center closed, but we arrived right around 4:00, which gave us a good hour. The visitor's center is fairly small, anyway, but I thought the museum was better than the one at Lookout Mountain.

Phoebe slept through the whole experience: 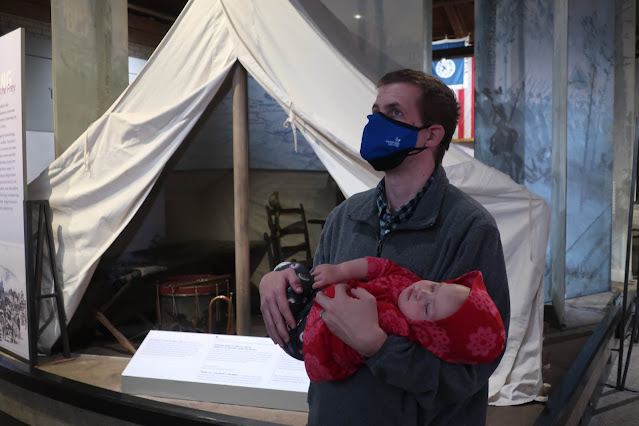 Zoë wanted to memorialize the fact that her feet are the same size as the feet on the "6 feet" stickers: 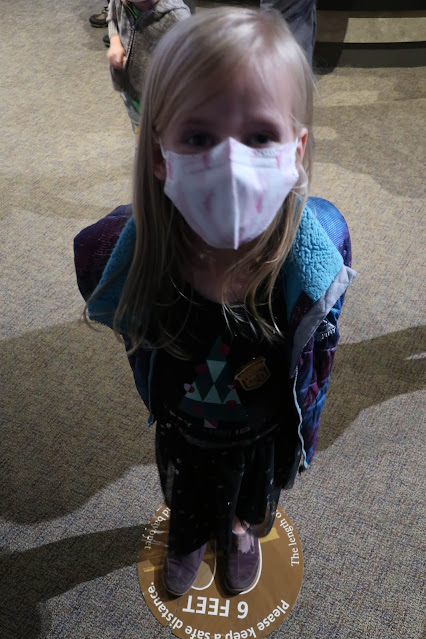 This battle was so bloody that Andrew remarked the area was more of a cemetery than anything. There were memorial markers everywhere for an estimated 34,000+ casualties (compared to Gettysburg with 51,000+ casualties). It's hard for me to really fathom war. I just...don't understand the impulse to "resolve" conflicts with...conflict. Like, at some point in the 4 years and 44 days of battle, before however many hundreds of thousands of people died...surely...they could have realized that this was, like, a really bad idea.

Anyway, the battlefield at Chickamauga is massive. It's got a little driving tour, which somehow felt like more work than walking with all the piling into and out of vehicles. But we had some good stops. 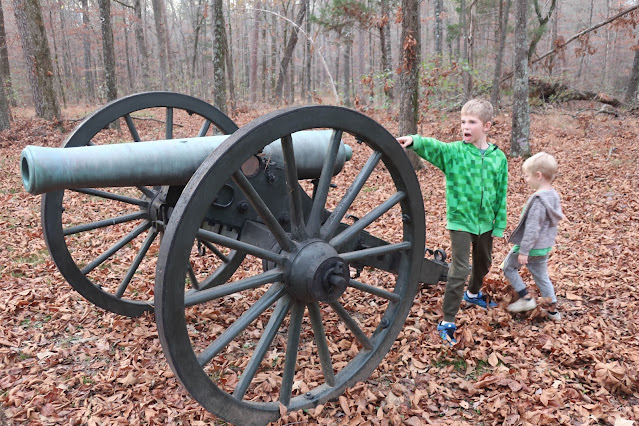 Our stop at the Hans Heg monumnet was rather eventful. It was a little jog from the road, which we literally jogged before slowing down to a walk. Miriam, who has decided that she doesn't altogether hate running, thought she'd sprint ahead and beat everyone to the monument. So she took off running as fast as she could and as she caught up to and overtook Andrew and Benjamin, she called out, "Bye, losers!"

Because apparently that's a family catch phrase now, immortalizing what was perhaps not my finest moment.

Anyway, she called out, "Bye, losers!" and then promptly stepped in a hole, which yanked her shoe off her foot and sent her sprawling. 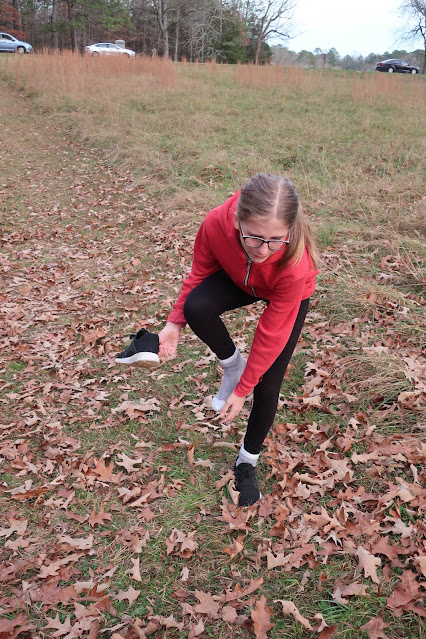 There were several—rather deep—foot-sized holes in the area, perhaps to remind us that these are hallowed grounds, not racing tracks. She was pretty embarrassed about her fall and rather upset about having a wet sock but otherwise seemed pretty okay so we carried on.

Here's Benjamin looking over a bridge into a creek filled with what I'm sure are walnuts and which he thought looked like many tiny cannonballs: 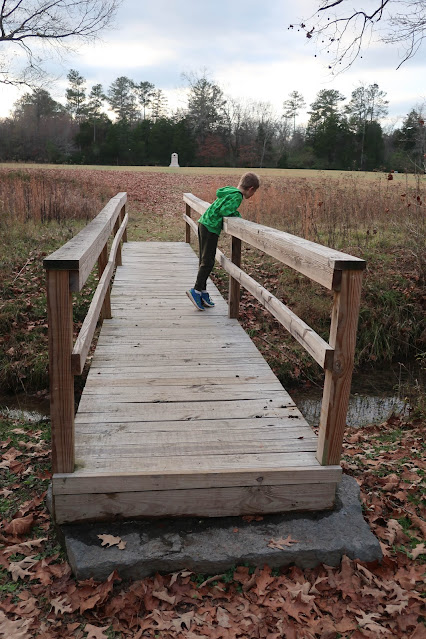 Here he is fishing one out of the creek: 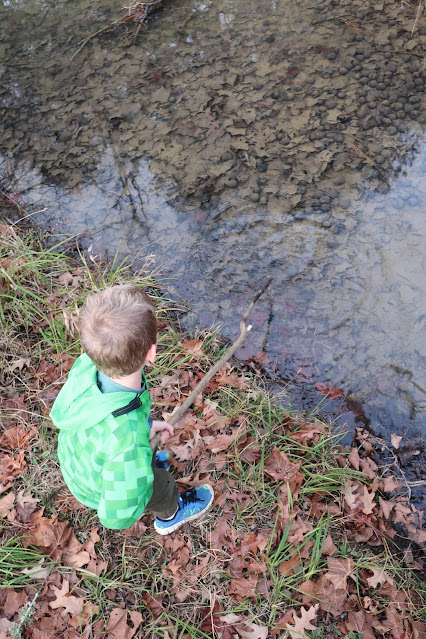 Here he is showing it off: 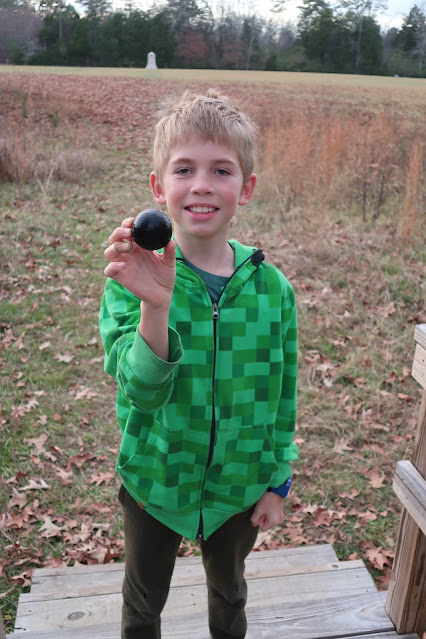 And here he is with it by the monument (we didn't walk out to the white on in the field behind us, since we had a somewhat-injured party): 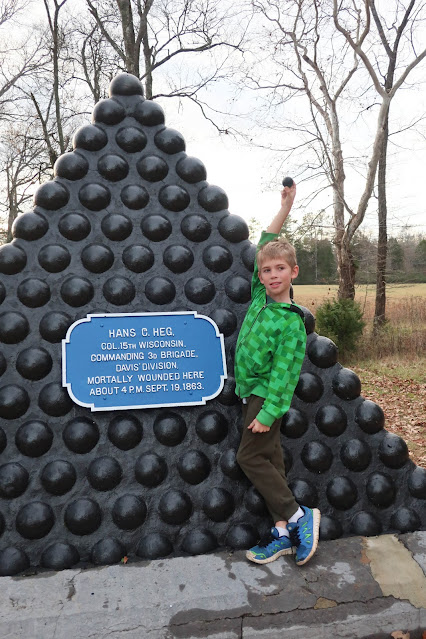 Miriam was limping a bit from her fall (though she's perfectly fine now) and Benjamin kept ribbing her about having biffed it, which didn't help her attitude one iota. He reenacted her fall for her "entertainment" several times and then, finally, decided he'd run off to the car for real.

So he yelled, "Bye, losers!" and took off sprinting toward the vehicles...but found another little hole and went down hard. Which...perhaps he deserved by this point, given how hard he had teased Miriam about her fall. He recovered rather quickly and we all laughed about it later.

I think everyone's favourite stop was the Wilder Brigade Monument, however. 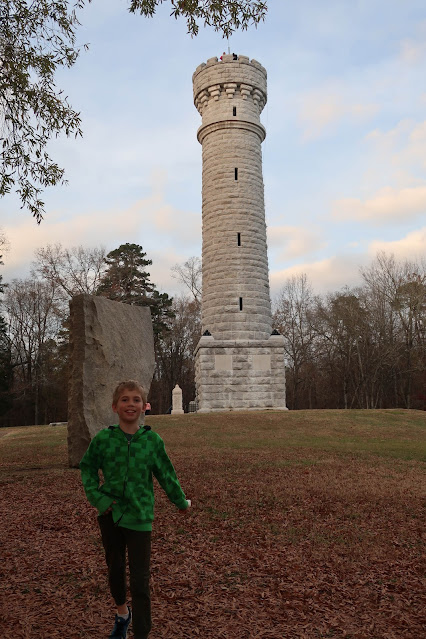 Built between 1892 and 1903 (and dedicated in 1899), this 85 foot tower was constructed in honour of the Lightning Brigade (so called because they were a "mounted" unit and could be deployed quickly). Ironically, the monument was damaged by a lightning strike in 1914.

Alexander was very impressed by it. Here he is showing it to Auntie Josie (as if it wasn't the most conspicuous thing around): 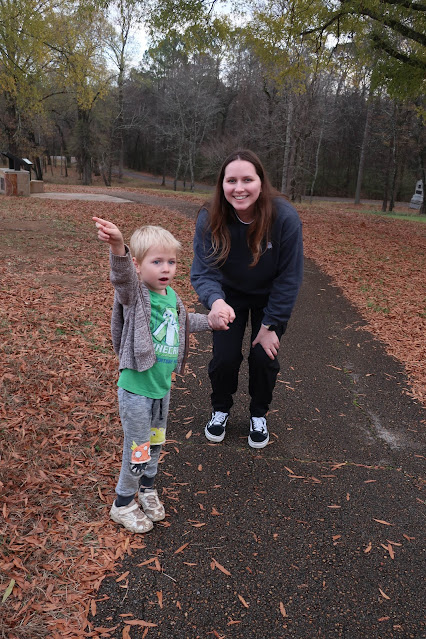 We climbed all 136 steps, up to the very tippy top of the tower. It was so dark inside that I wasn't sure it was even allowed (even though the gate was open and everything), but cell phones make handy flashlights.

Not only was it dark, it was also full of ladybugs. We were crunching the dried up shells of ancient ladybugs...and squishing the younger ones. They were everywhere. I should have thought to take a picture of how many were covering the outside of the tower, but I was more concerned with hovering over my children, making sure they weren't leaning too far over the edge or anything. 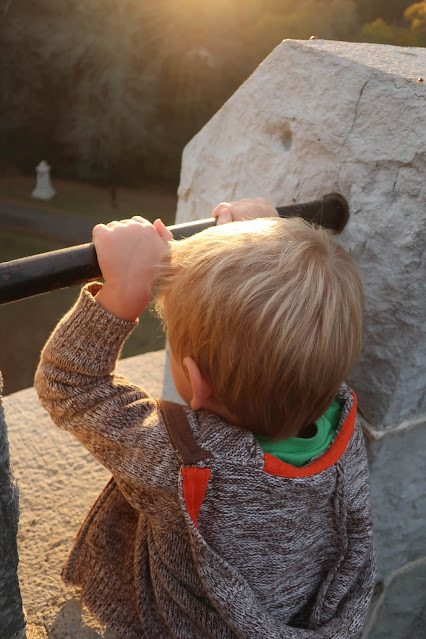 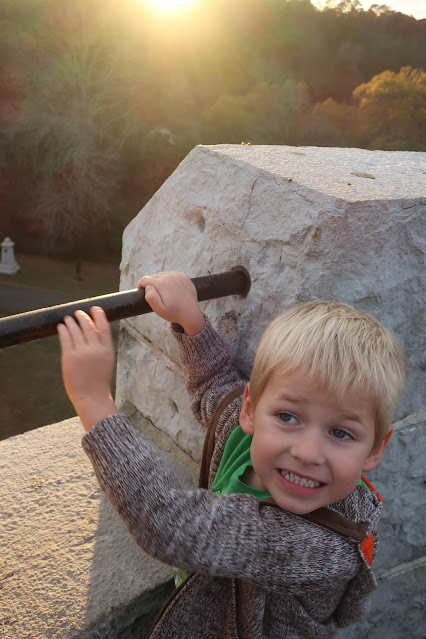 But maybe you can spot a few in the pictures. In the picture above, for example, I can see at least four ladybugs crawling on the stone above Alexander's head. And in the picture of the view that I took (below) you can see a ladybug coming in for a landing (that little red blur in the clouds): 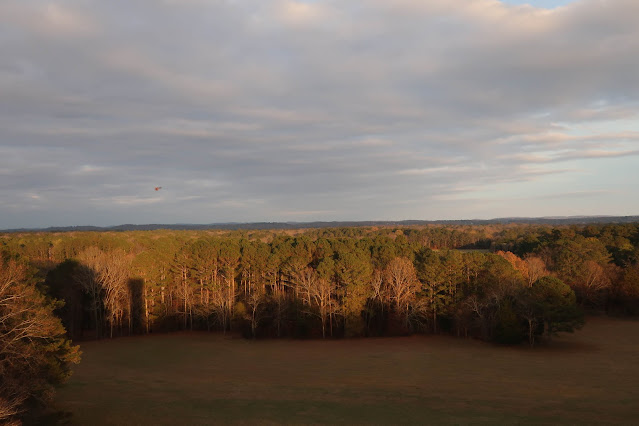 Here's the same view without the ladybug: 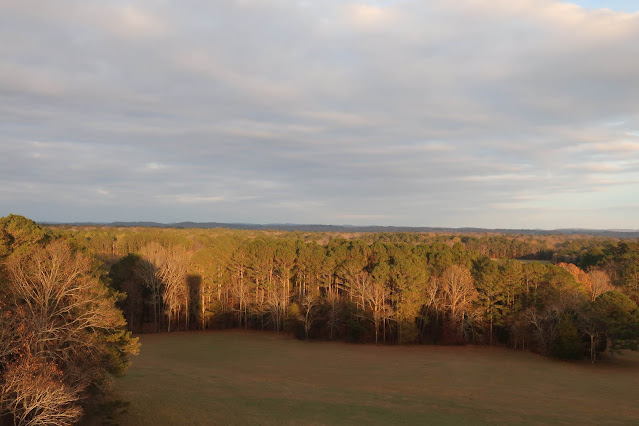 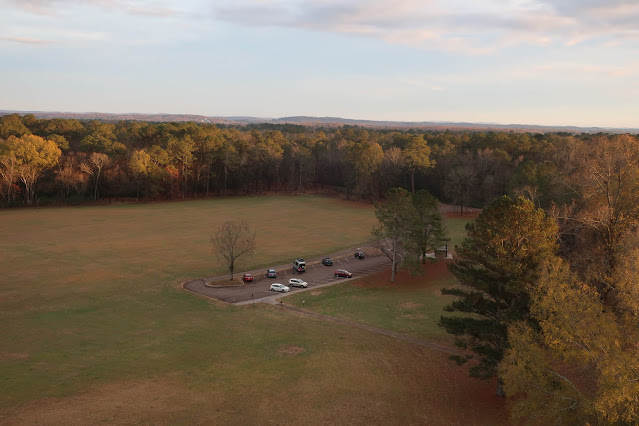 Here's Andrew busily snapping pictures of everyone else: 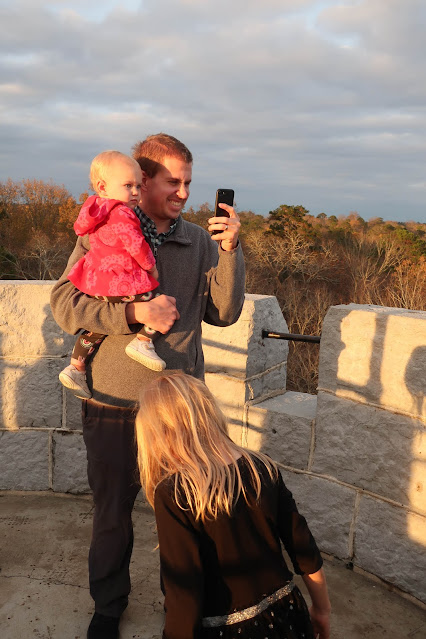 Here's a picture of him and Phoebe: 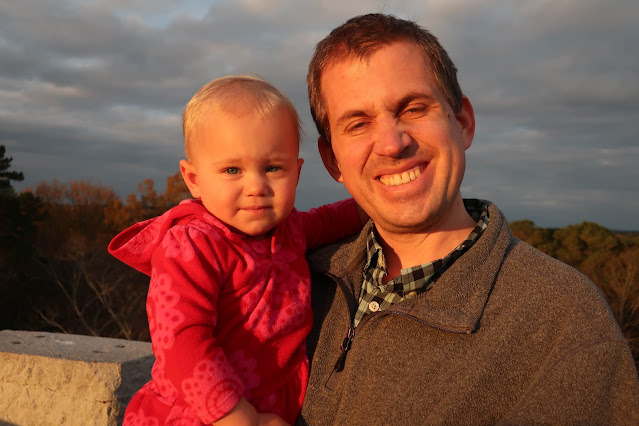 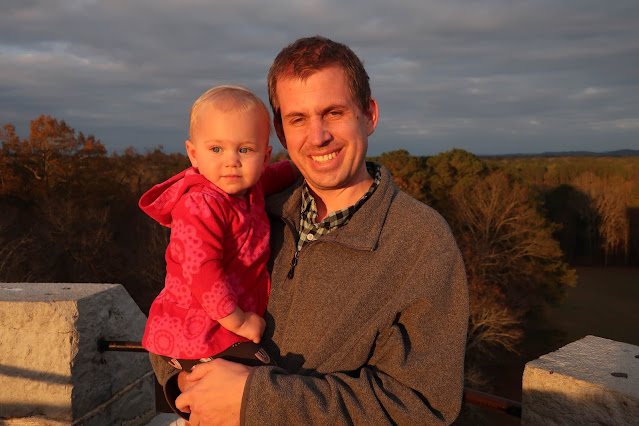 And the three of us (though you can't even tell we're even up high because we're blocking all of the background): 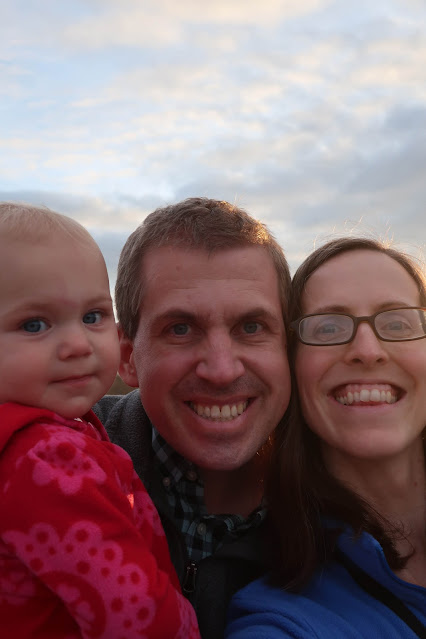 Here's everyone (except me) in front of the tower, all a little shaky-legged from hustling up and down that winding staircase. 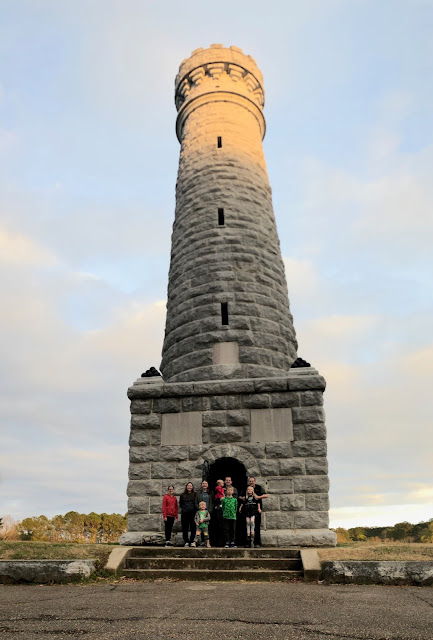 And here are the three little kids romping around the field while I sat outside the visitor's center (which by this time was closed), attempting to nurse Phoebe before our long drive home. 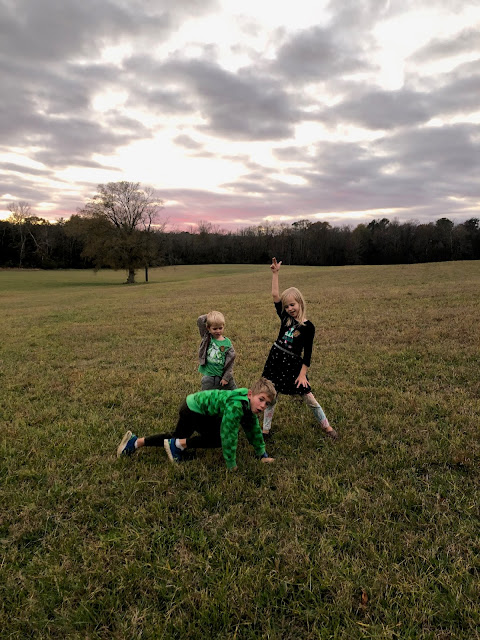 Fun fact about Phoebe: she prefers to nurse in her nursing chair. So she didn't nurse well the whole day and was very happy when we got home so she could have a decent meal. Not like I didn't ever offer her milk earlier...she just was so distracted by everything that she couldn't focus on eating.
I'm sure her lack of milk contributed to her feelings about the car ride home. She cried and cried and cried until she finally fell asleep. But, oh boy, was she ever upset about life!
She still doesn't hold a candle to Zoë, who will always and forever win every prize when it comes to her screaming endurance/volume/pitch.
She would be hard pressed to win an award for her bladder control, however.
On our way out of Atlanta, she had to make a bathroom break within the first ten minutes of the trip (which was fine because we had to gas up before we left for good, anyway), reminding us all of the time she wet her pants within the first ten minutes of driving up to Idaho from Spanish Fork.
She did the same thing (asking to pull over to find a toilet within ten minutes of leaving) on our way out of Chickamauga as well, silly girl! I guess she just needs to make extra sure her bladder is empty before we get too far away from civilization.

(Oh! And I forgot to mention that when we got home a ladybug flew out of my shirt. So now there's a Chickamauga ladybug living in our house! Those ladybugs were seriously everywhere!)
Posted by Nancy at 11:26 PM