As I've mentioned before, Phoebe loves Grogu. She has a ritual of saying hello to the Grogu in Daddy's office. She climbs onto the top bunk in the boys' room to visit with Benjamin's stuffed Yoda. And Alexander generously offered her the stuffed Grogu he earned while finishing up his potty training (but which he lost interest in since...well, it's not an owl). She just adores Grogu. 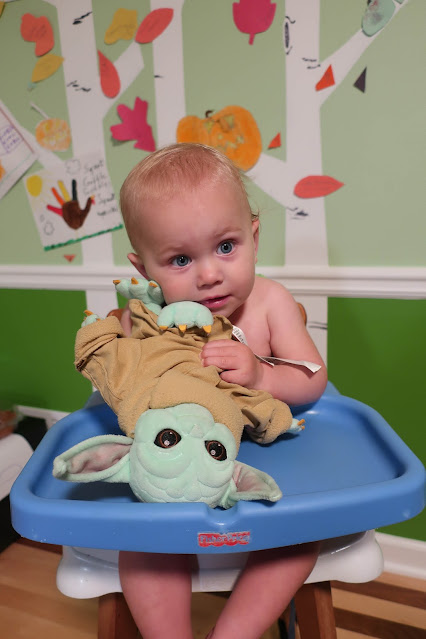 She squeals and points whenever she sees Grogu, which is just funny given the fact that she's never watched any Star Wars shows. 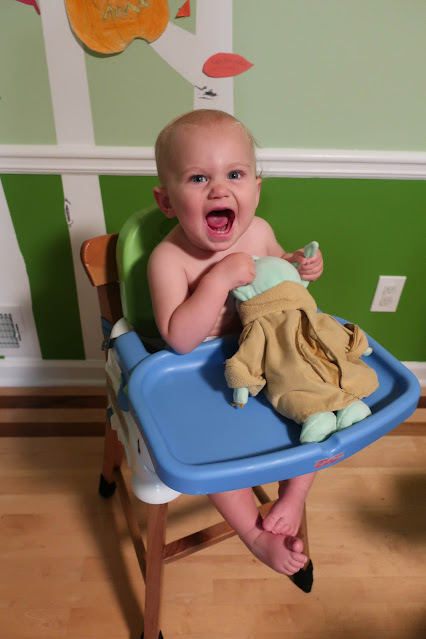 Here she is getting all excited see Grogu when the cake turned around (yet again):

Her initial excitement over the cake reveal was the best, but unfortunately I missed filming that.

Still, you can clearly tell she thought the cake was perfect: 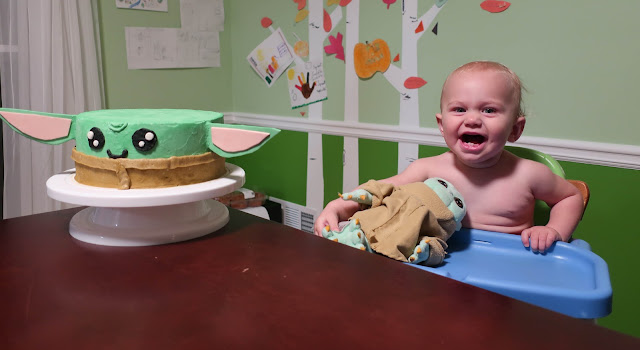 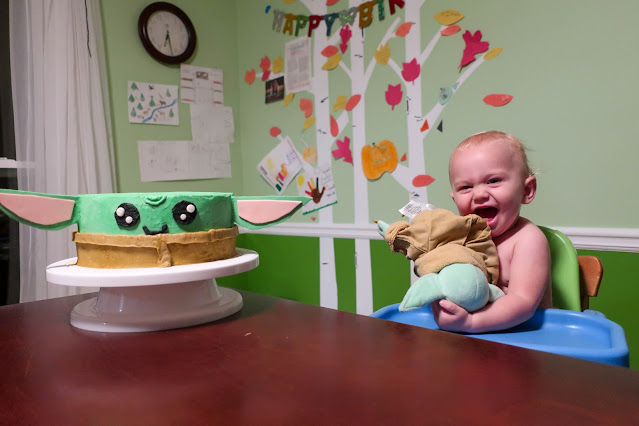 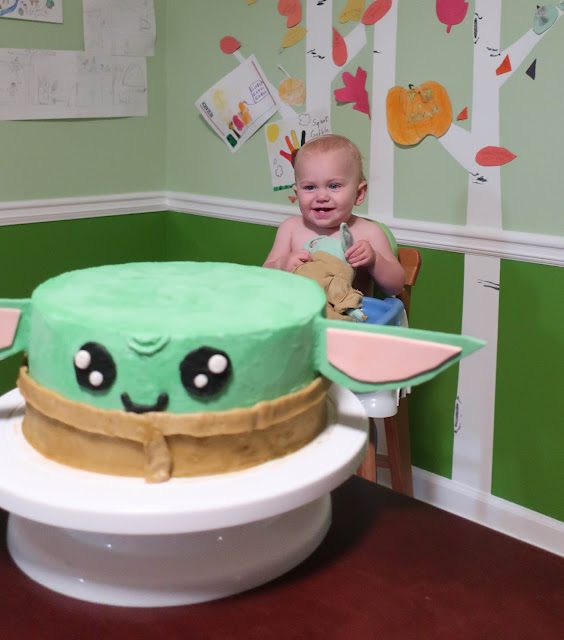 I have to admit, it is rather cute! 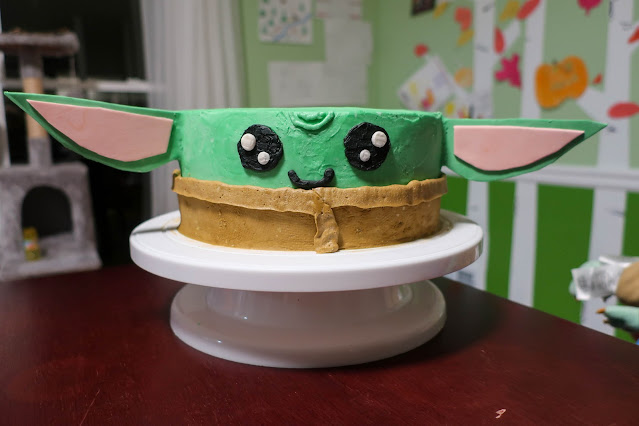 Here's all the little Grogus together: 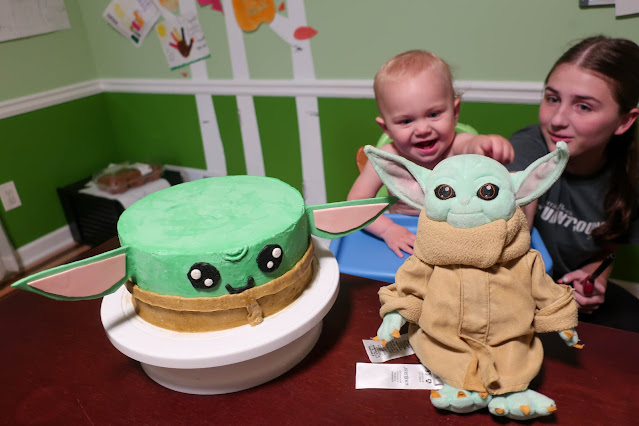 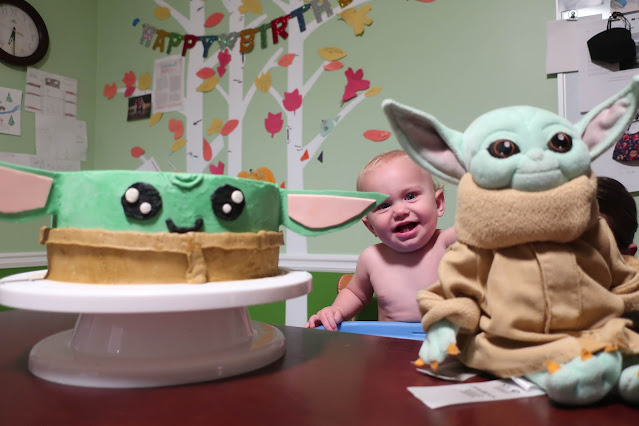 And here's Phoebe surrounded by her siblings: 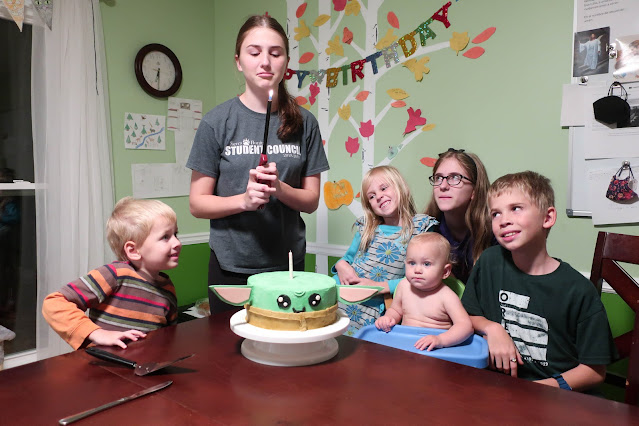 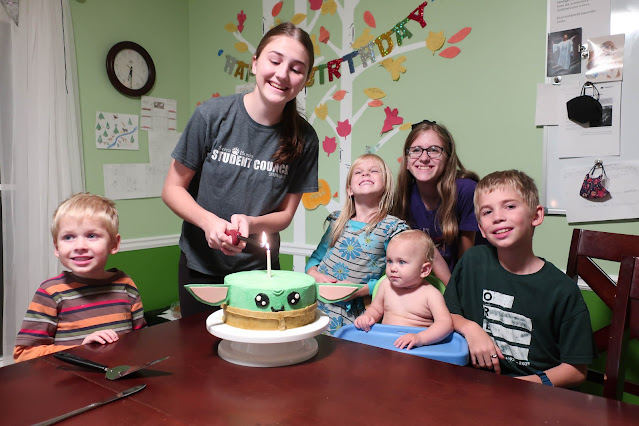 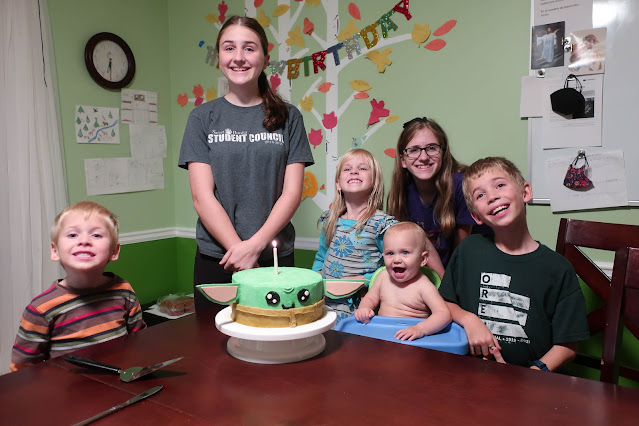 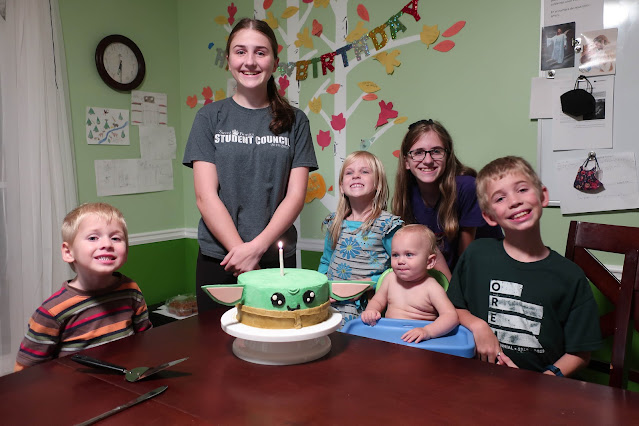 She was in a very good mood this evening, which was nice because although her morning was happy, too, her afternoon was a little bit grumpy. I guess cake has a cheering-up effect on people. 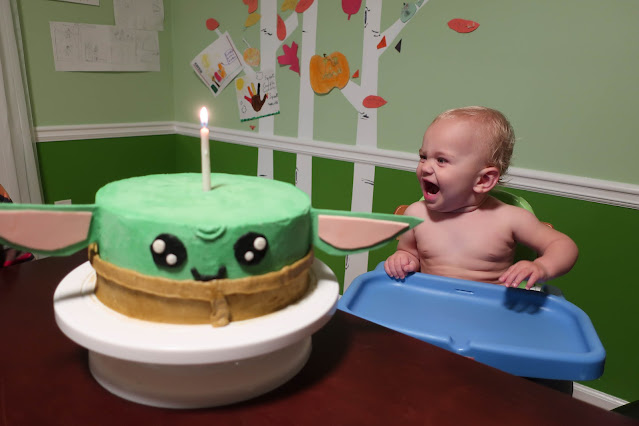 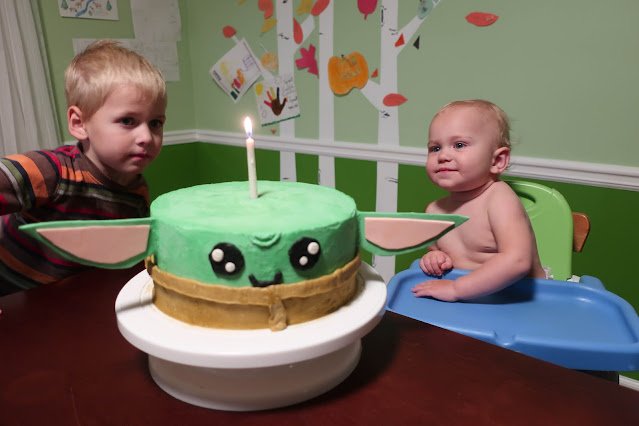 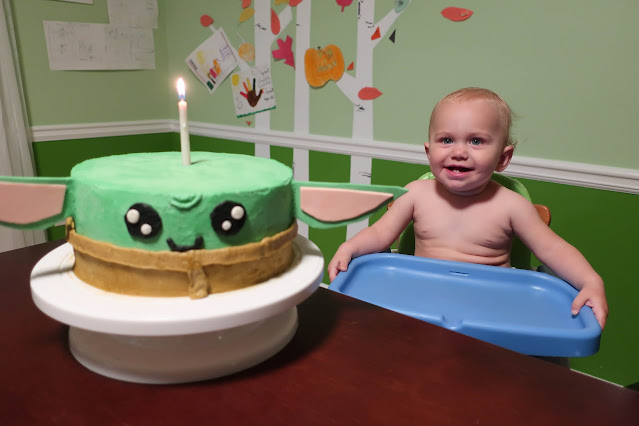 She sat very nice and still while we sang to her: 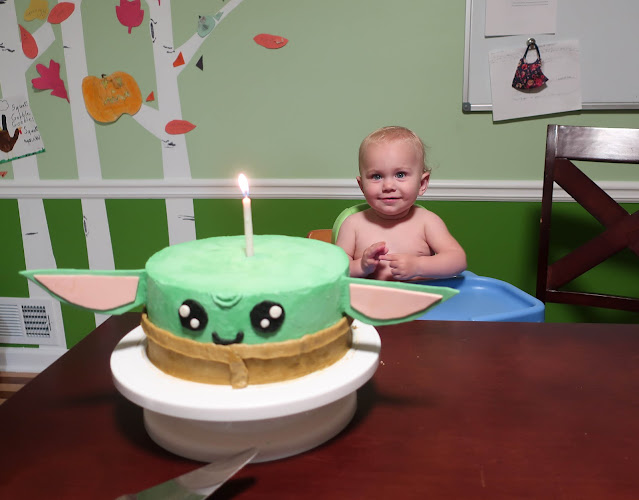 Since babies can't blow out candles and the kids were all fighting over who would get to blow it out for her, I just went ahead and blew it out from across the table. It is better that all children should be disappointed than one child boasts about getting a special privilege, right? 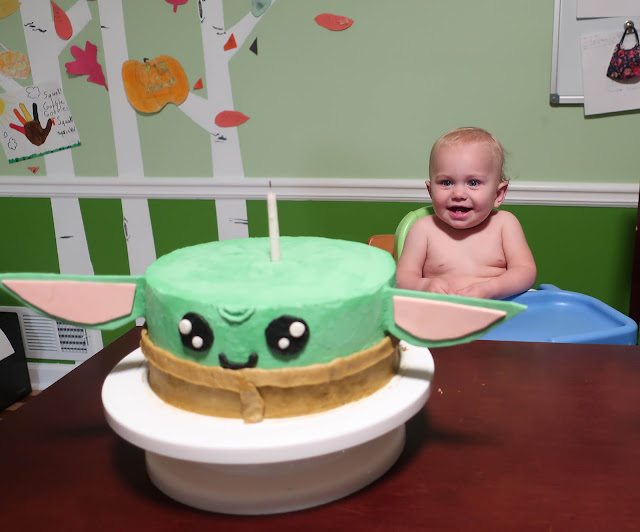 I'm not sure what Phoebe was doing here, but it looks like she's telling us to put some cake on her tray already! 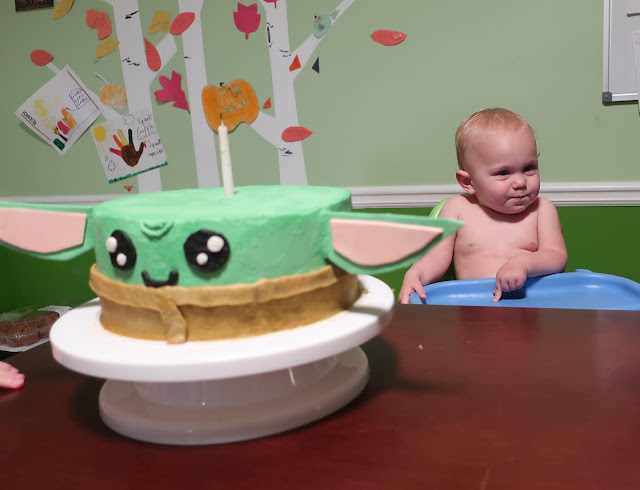 Although she's had bites of cake in the past (we go through a lot of birthday cake at our house), she hasn't ever been offered an entire slice before. She wasn't mad about it. 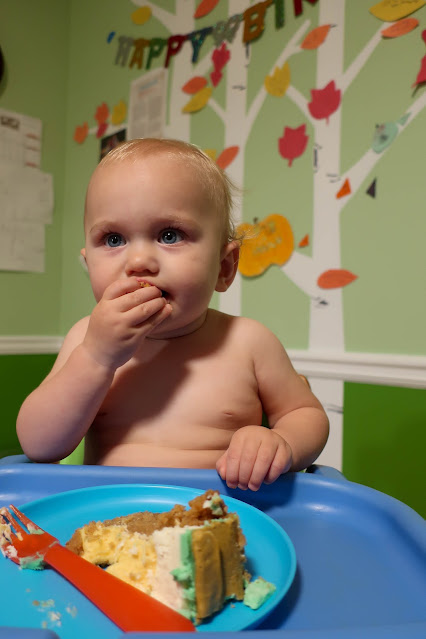 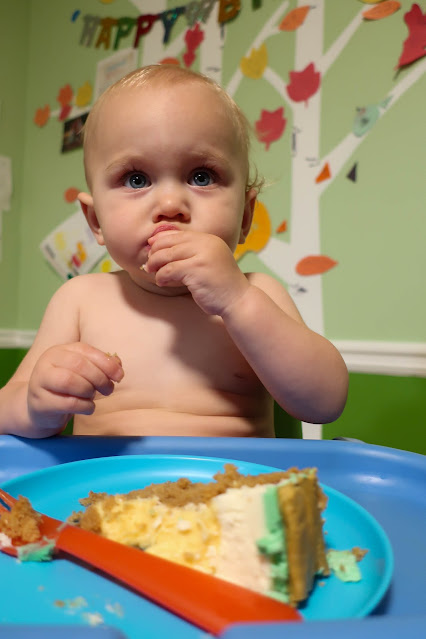 Rachel made a delicious pumpkin spice cake, with a cream cheese pudding filling, so it was almost healthy. Phoebe took a few minutes to really get into it. 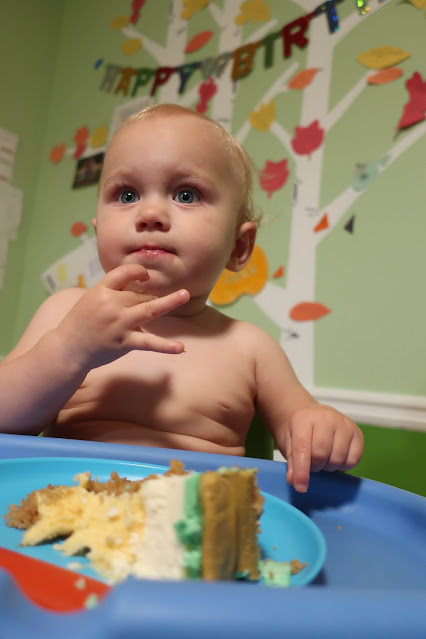 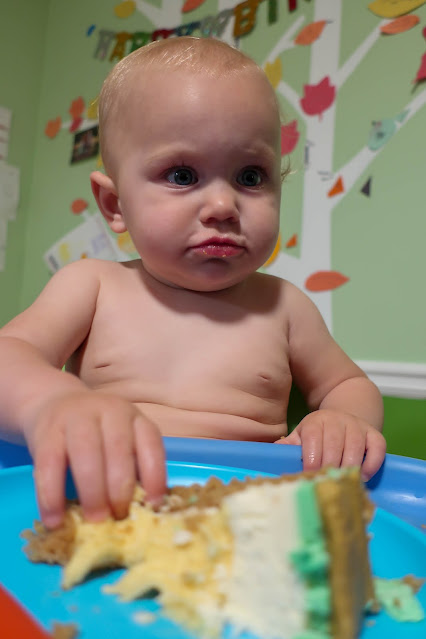 I had to capture these sweet little toes, which Phoebe likes to hook under her tray while she eats. 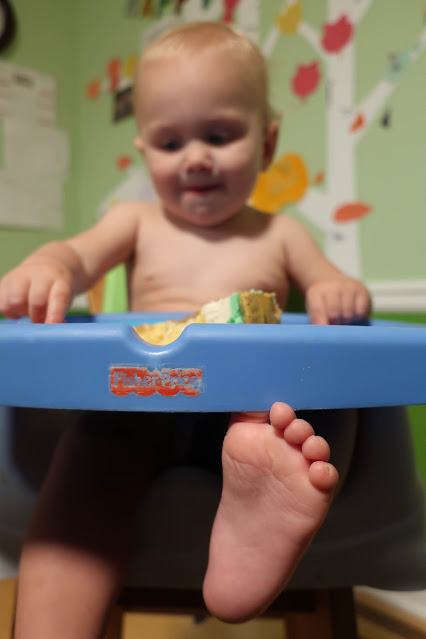 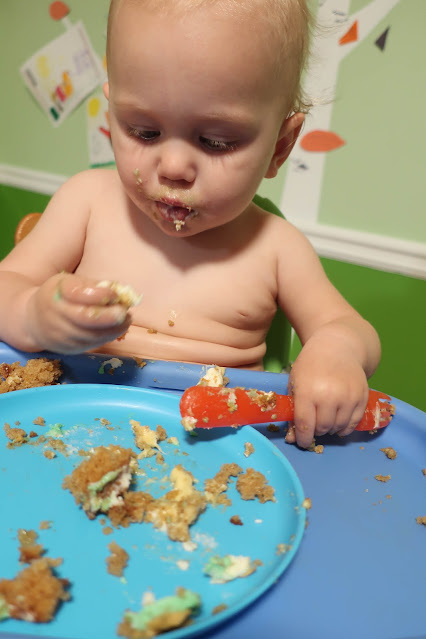 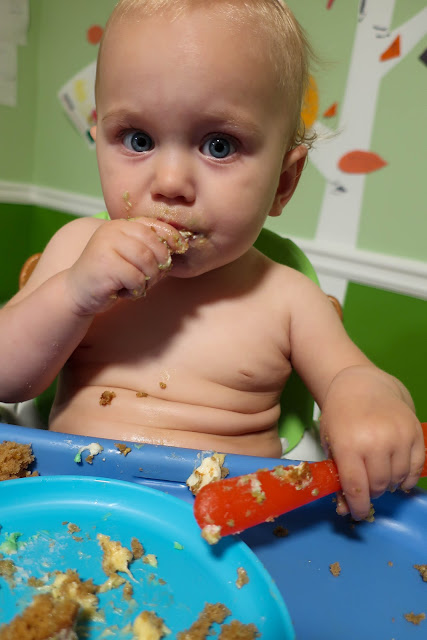 Benjamin took these last few pictures while I was talking with my mom on the phone: 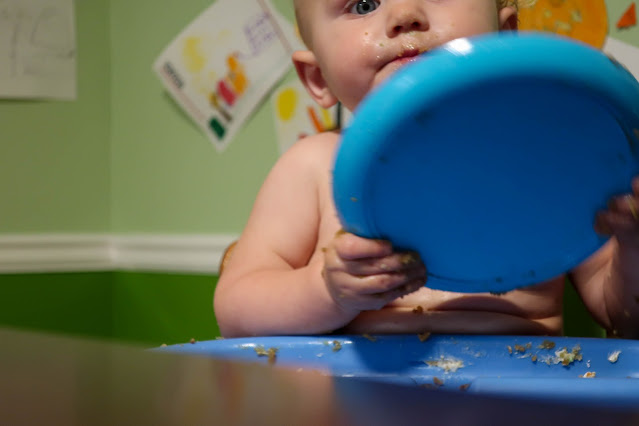 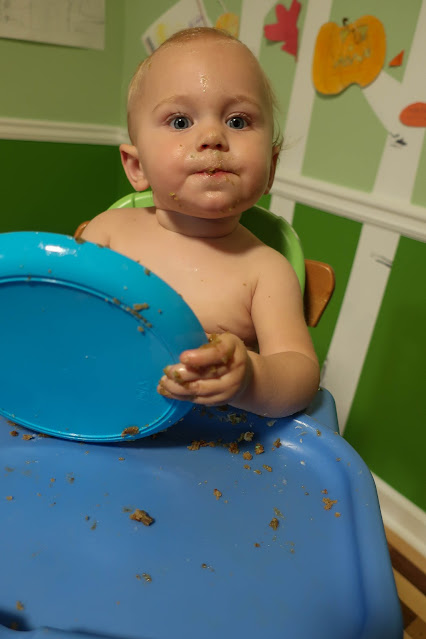 Phoebe had a bath between dinner and cake (since she typically requires a bath after dinner). Then, of course, we had to give her a bath after cake as well! 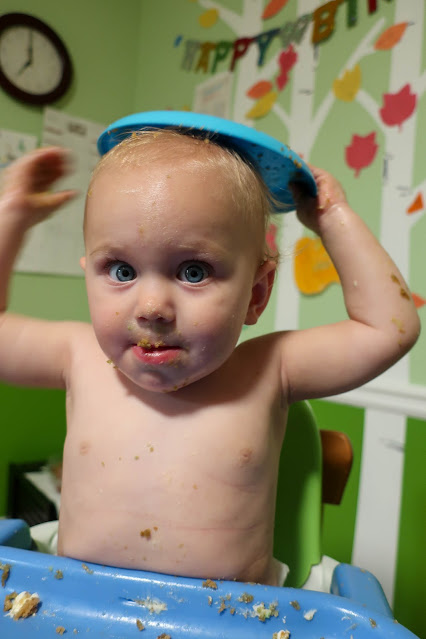