Miriam has been 13 for over a week now, but I finally managed to get everyone's birthday balloon contributions for her tonight, so I can finally tackle her birthday post today!

I'll also share that she had a piano adjudication this weekend and was so worried that she had messed up on one of her songs (which she had to play from memory), but today at her lesson her teacher gave her her scoring sheet and she was ranked...superior. So she did just fine (and more than fine—excellently)!

She played Prelude in C (J. Bach) and was told she gave a "good solid performance with great continuity and memory," along with many tips to improve her piece (like, "if you use 5-3 fingers at the end of the measure, you might be able to connect to the chord at the beginning of measure 4, which would really add a lot to the sound here").

She also played Solfeggietto (CPE Bach) and received similar instruction and appreciation for her hard work.

It truly is a joy to listen to her play, to watch her enjoy something so much, and to have her share her love of music with others. Sometimes I think back to those early days in Durham when I was teaching her piano lessons and my mind is blown because she took the rudimentary knowledge I could give her and just...has run with it. She knows way more about music than I probably ever will and plays so beautifully! And she's so gracious about it, too!

The other day I was stumbling through a piece that she'd arranged and I mentioned something about how fluent she is with music. Like, she can see music and know just where to place her hands while I still have to pick my way through things. And she can hear how music might work together in her mind and is able to put it on the page...another thing that I really just struggle to do.

And she just smiled and told me that I'm fluent in other things, that it takes all kinds of people to make the world run, and that you don't have to be fluent at something to enjoy it (that is, it didn't bother her that I was stuttering my way through her piece one bit). 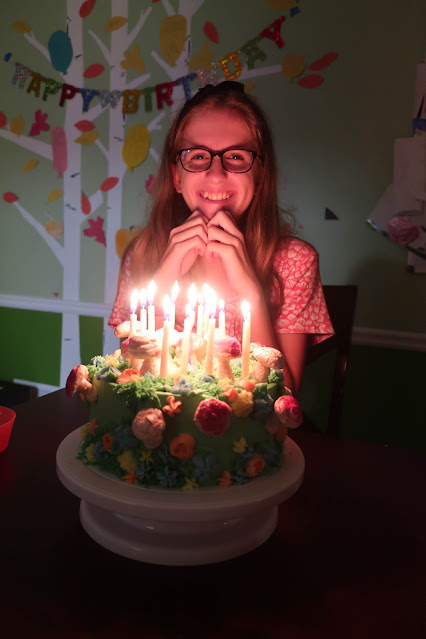 Her birthday was on a Tuesday, so it was rather an ordinary day for her. She attended a meeting for her R internship, she tended Phoebe while I attended a Zoom meeting for school, she practiced the organ, she did her schoolwork. Just a regular, ordinary day.

And then Grandpa came over and we had cake and ice cream!

Rachel made her a mushroom cake for a number of reasons: 1) Miriam thinks mushrooms are cute, 2) Miriam had been studying mushrooms in biology, 3) Rachel wanted to learn how to make (meringue) mushrooms so she can make them again later to decorate a Yule log cake because she wants to make one of those, and 4) Rachel was thinking about the lovely forest-themed needlework that Miriam made last year. 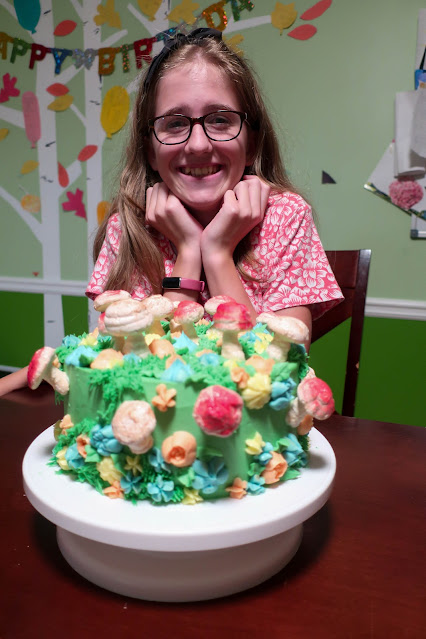 The mushrooms are incredibly authentic-looking: 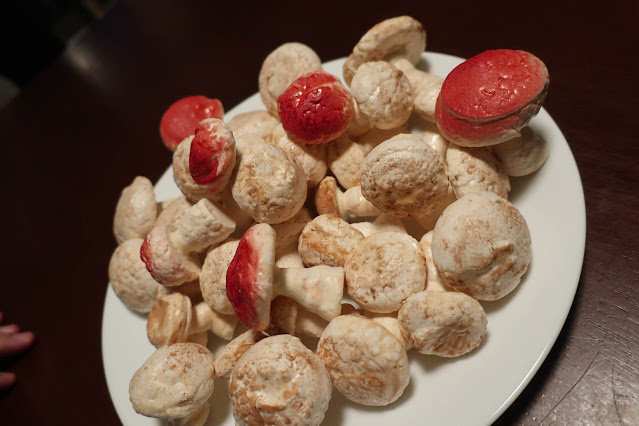 Here's another view of the cake: 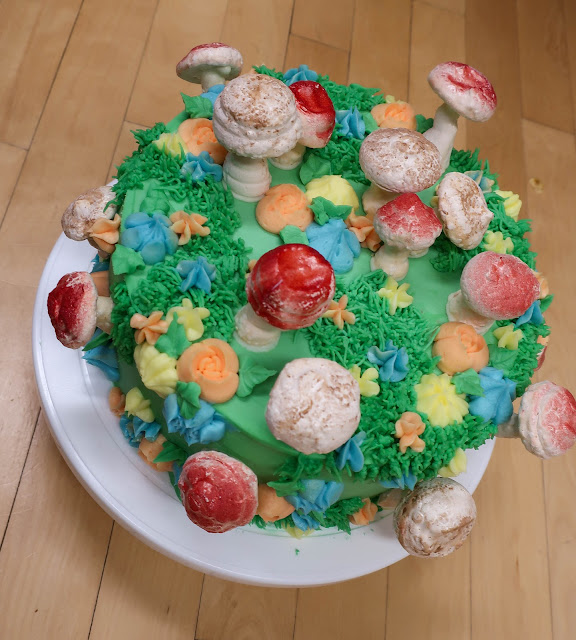 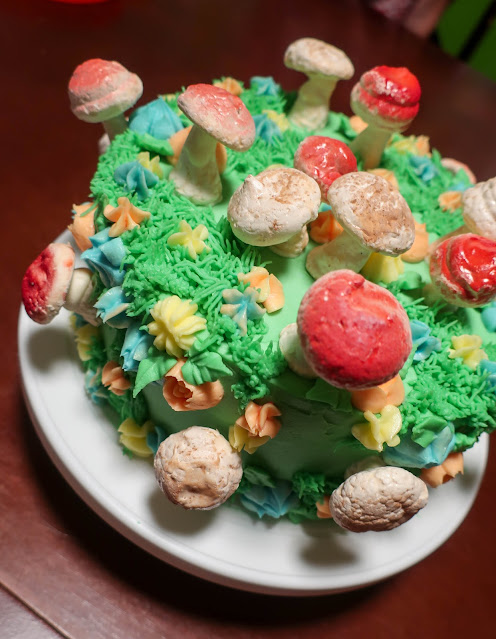 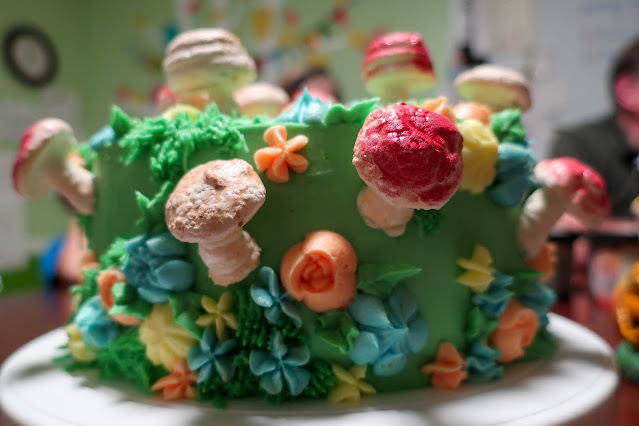 Here's cute Phoebe who was feeling impatient after dinner while everyone was getting the table ready for cake. She figured she'd eaten her dinner and should be freed from her highchair. Why wasn't anybody getting her down?!

Whenever I'd hold the camera up to her, though, she'd pull out a big smile: 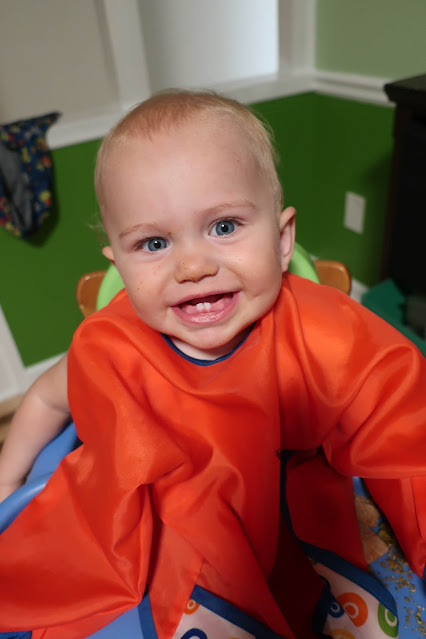 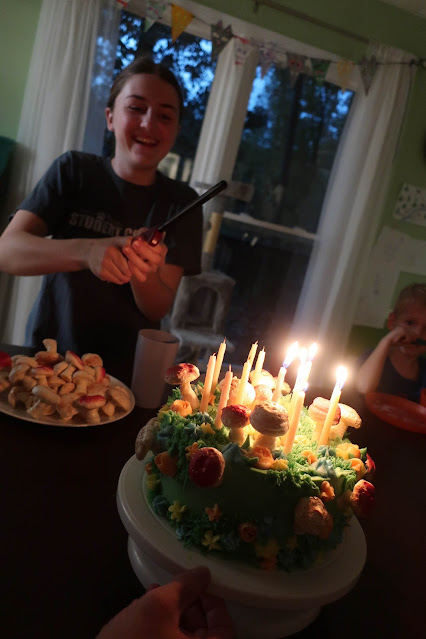 And here we are singing to her: 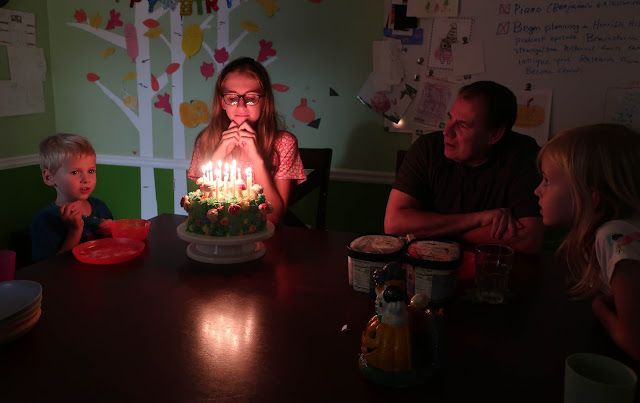 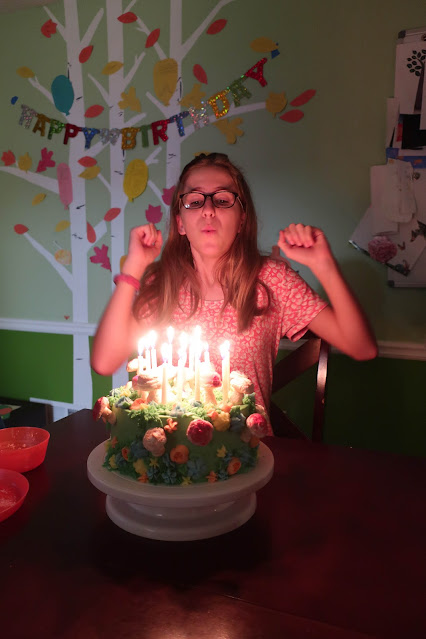 Presents were a hit. She had a very short list of things that she wanted...and most of them were office supplies...so she got basically everything on her list, and then some. Here she is paging through a book of music that Naanii sent to her (it's a little more difficult than a book she recently leveled out of and she's excited for the challenge and has already marked a few pieces to learn): 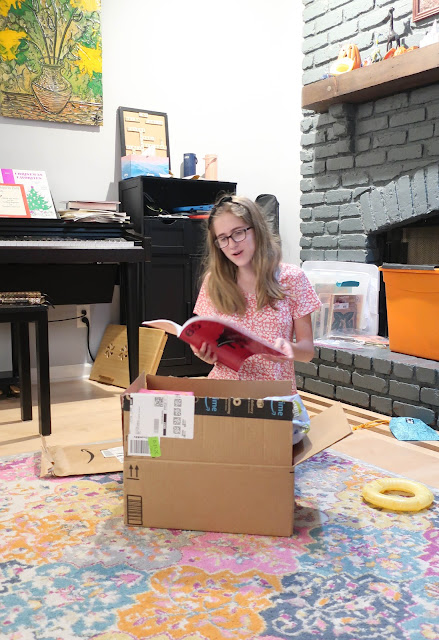 Rachel gave her the scarf she'd been working on since the beginning of October (Miriam is pretending to be surprised because she's not remotely surprised; she's been watching Rachel make it all month): 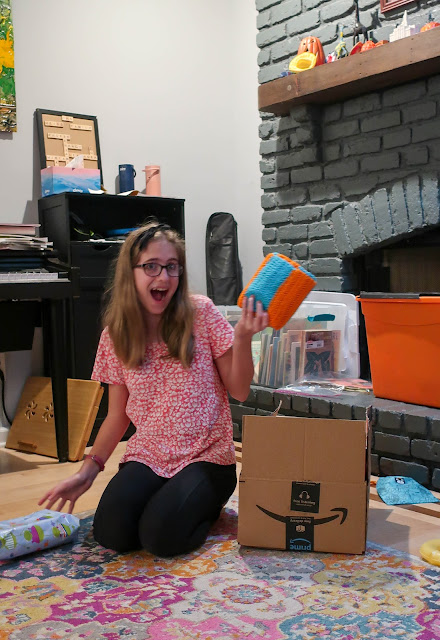 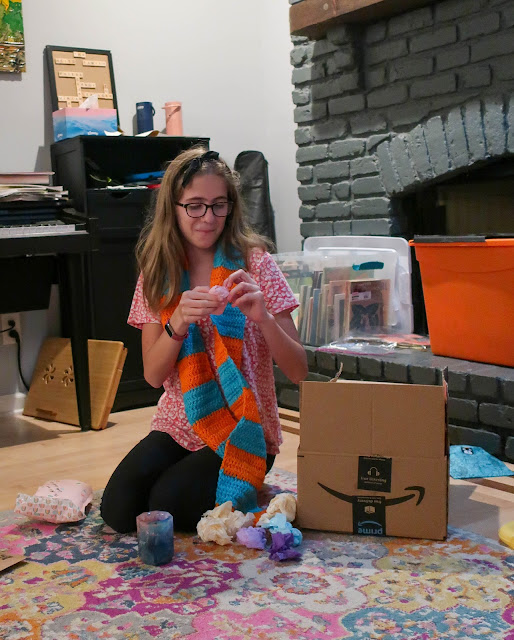 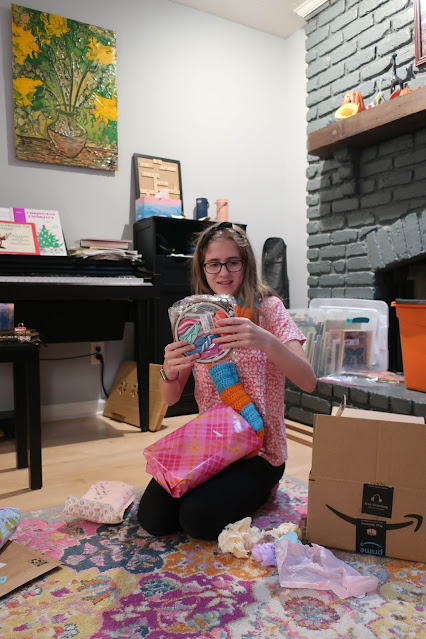 A new mug, an embroidery floss organizer, a pen cup for her desk (thanks, Auntie Josie!), highlighters, sticky notes! 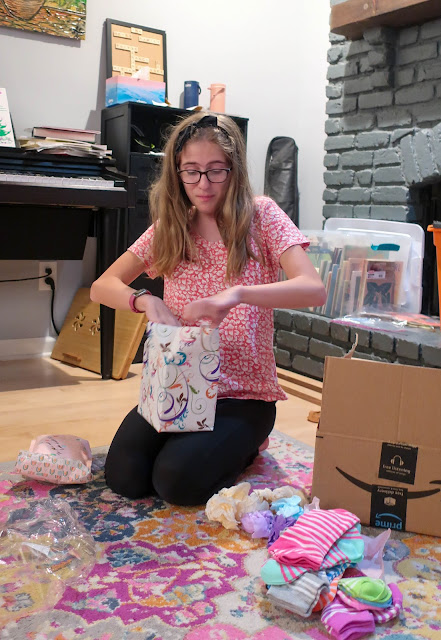 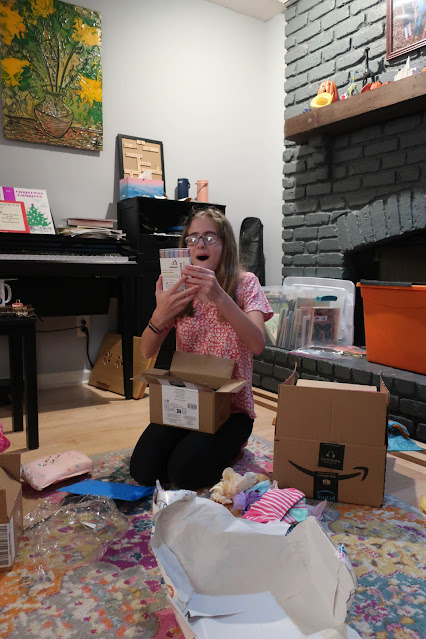 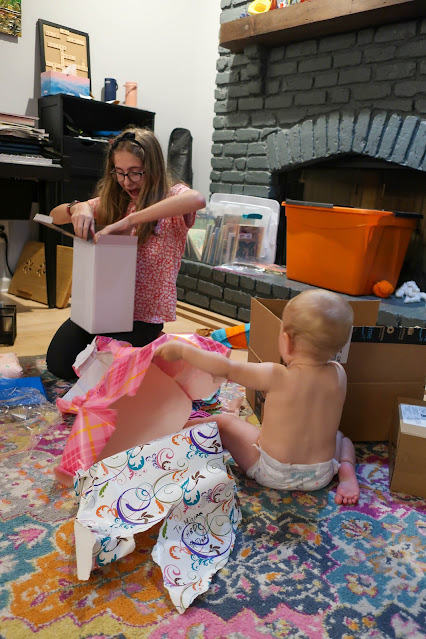 And something not on her list—a set of gamer headphones so she can talk with her friends while playing Minecraft: 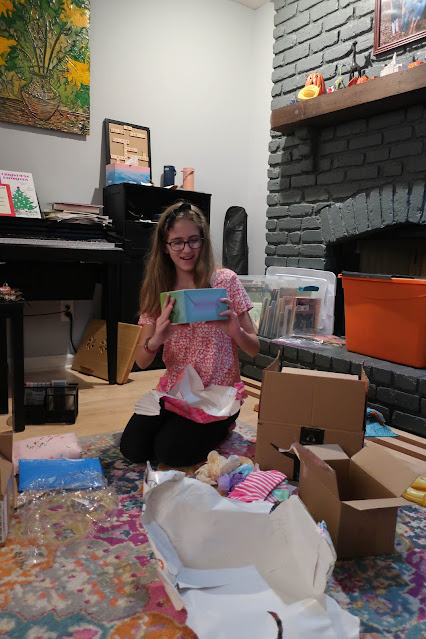 Here's Phoebe modeling those for us: 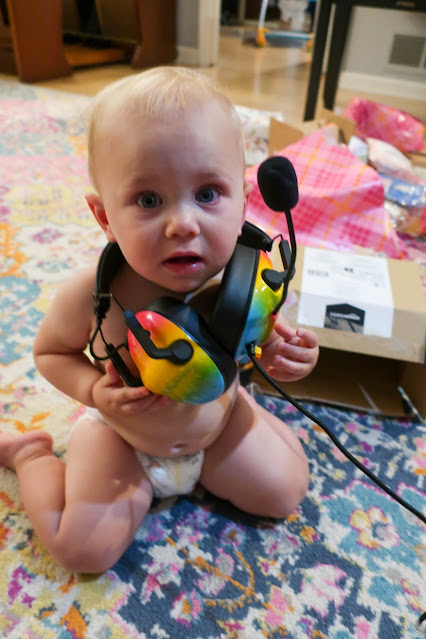 And here's Phoebe feeling confused about having a piece of foam on her head: 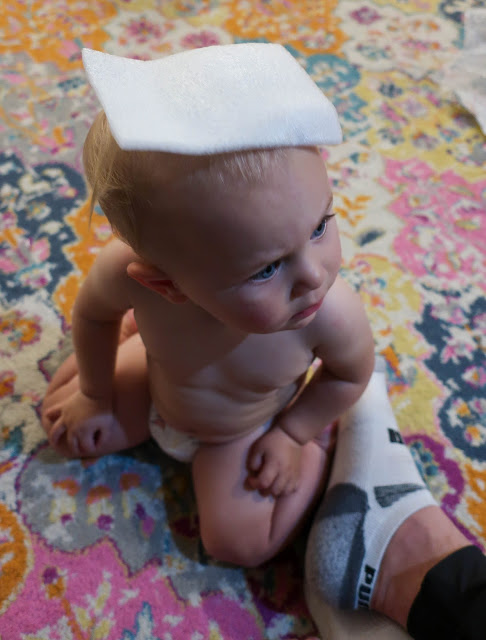 And here's Phoebe wrestling Benjamin (with a box on his head) to the ground: 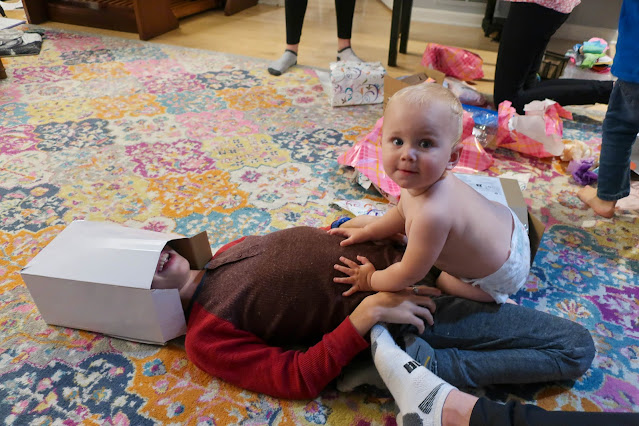 Clearly Phoebe was a bit of a show-stopper, because here are several pictures of her sitting with Andrew and Rachel, taken while we were watching Miriam open her presents: 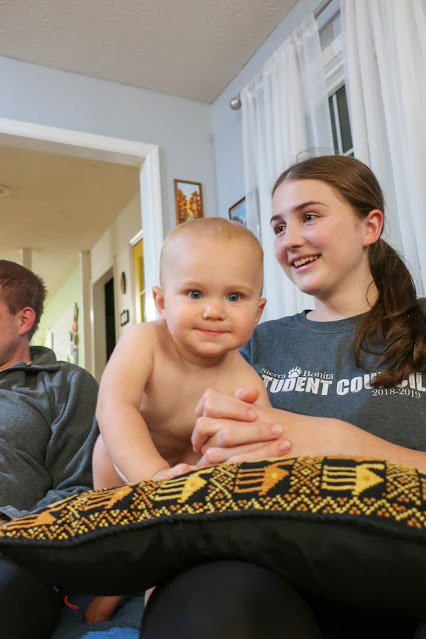 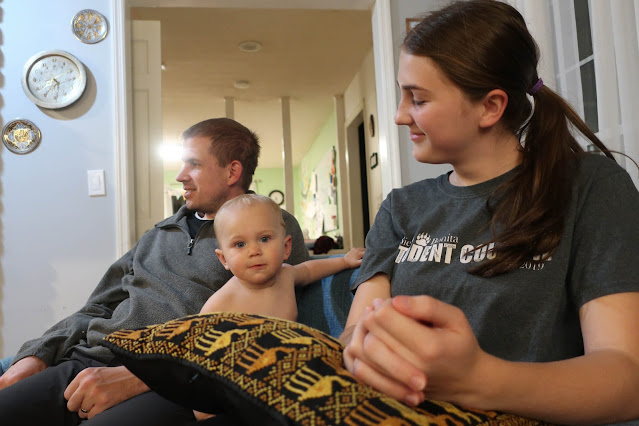 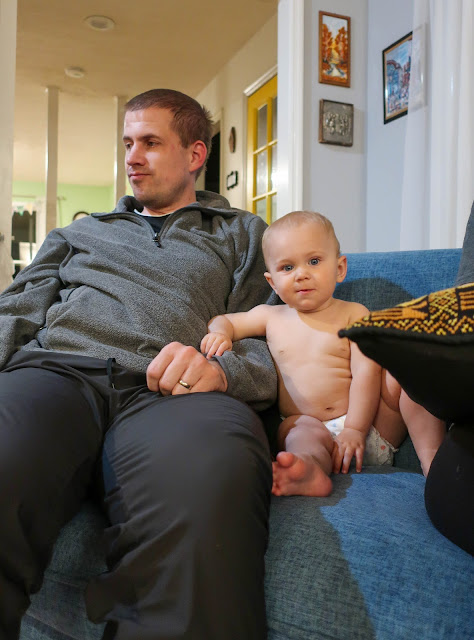 Here's Zoë and Alexander with Grandpa: 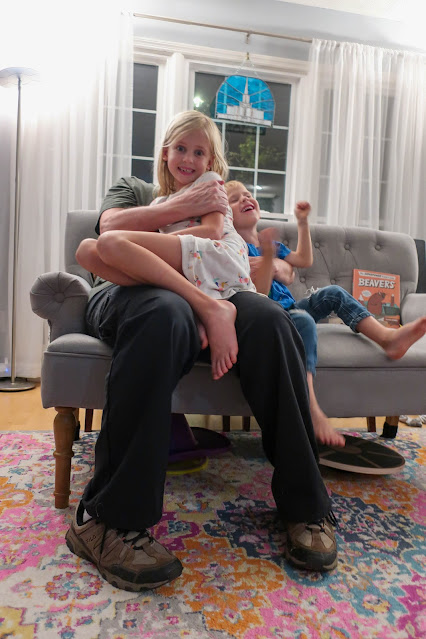 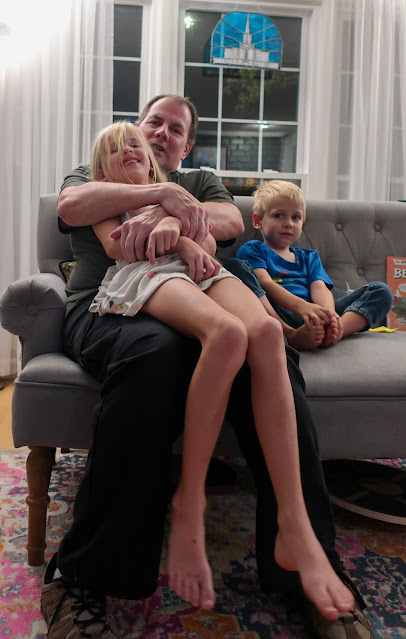 And here's all the kids together: 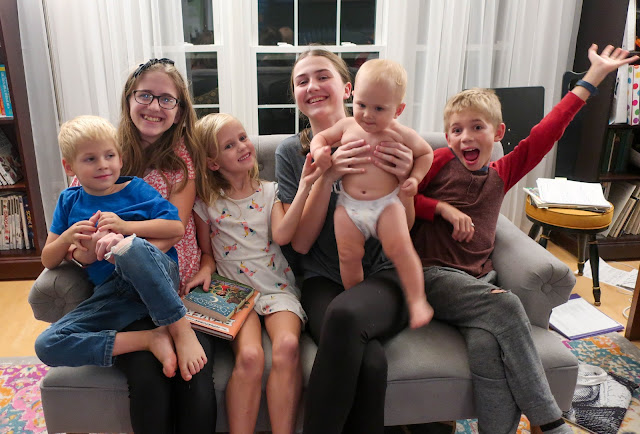 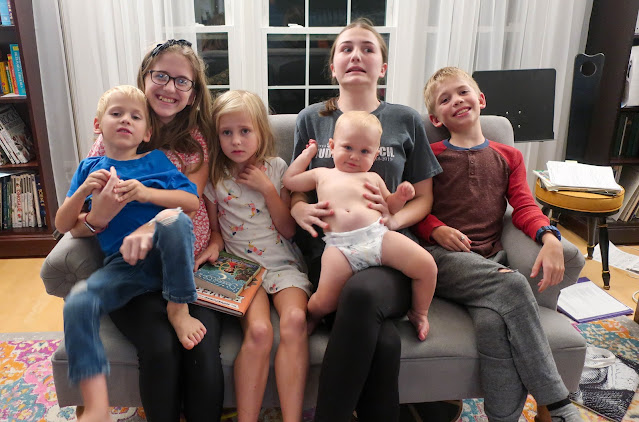 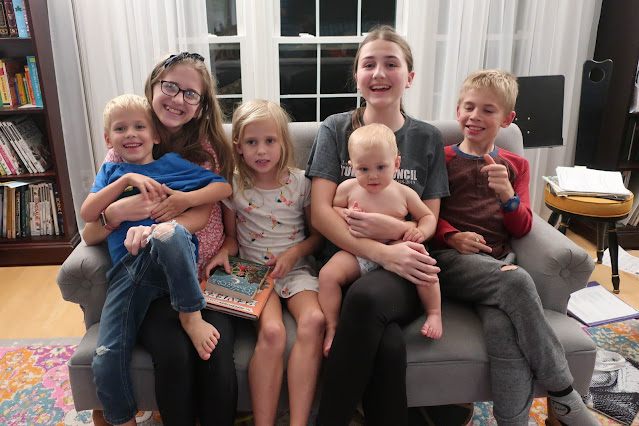 And here are all the reasons we love Miriam, starting with Alexander, who does not quite understand acrostic poetry but did his darndest, anyway. Not that acrostic poetry is required for birthday balloons. It's not. But it is apparently traditional now, so it would be a real shame if no one attempted it.
Without further ado, from Alexander:
Music
Nerd
Babysitor
Lego bildor
Coding

FUNCRFZ
LOVING
SISTER
YOURMC
BEST
THE BEST!
I can tell what his first balloon says just fine, but I'm struggling a bit with the second. Fun crafts? Loving sister. Your music best, the best?? I'm not sure. But he sure does love Miriam!

I can't believe you're already 13 years old. You are good at music, crafts, and a good baby sitter. All the babies love you!

And that's true. Every baby on the block adores Miriam.
Benjamin says:
For: memer36

You know how to draw,
You sleep on the bottom bunk
And dad taught you R
You are the age to babysit us
The whole cul-de-sac loves you
This was Benjamin's attempt at a tanka (5-7-5-7-7). We're working on being more meaningful rather than factual for things. I mean, facts are fine. But let's make the facts meaningful. For example:

Miriam has been giving Benjamin drawing lessons (in addition to teaching him piano) and he appreciates that because he has been unsure about how to move on from the basics (he's literally still doing stick figures). He also thinks it's interesting that all the kids are in bunk beds and could have developed that theme a little more.
Rest assured there is emotion simmering beneath the facts that he offers in his poem.
Rachel (finally) said:
Dear Miriam,
I can't believe you're a teenager already! (Gross) You're so smart and kind and fun to hang out with (and you tolerate me forcibly exposing you to the books, music, and movies I like so well). You're such a talented musician and artist, and such a good sister and friend. Happy belated brithday! I love you!
—Rachel (the best older sister)
I wrote:
This
one's
special.
I can tell.
The way she smiles—
constant—like La Giaconda—bright,
yet—like The Madonna—pondering things in her heart.
That's a Fibonacci sequence poem: 1, 1, 2, 3, 5, 8 and 13 syllables. For your 13th birthday! Hard to believe you've gotten so old; love the wonderful person you're becoming and the beautiful stage you're in now. Watching you be so dedicated in learning new things—from organ to R—is inspiring. You're amazing!

Thank you for being my "easiest" baby and such a pleasant child and helpful teen. You're a good, good kid. Love you lots! Keep learning, keep growing, we'll figure out the tricky bits together!
And Andrew wrote:
Happy belated birthday balloon!
You had a fantastic and momentous year and I'm so proud of everything you did and I'm so excited to see what you do during your first year of teenagerhood and you are awesome and amazing and this sentence is too long and punctuation-free the end love dad
Posted by Nancy at 11:47 PM