Going Mythological, A New Toy Box, and a Girl and her Kitty

Alexander has been on a roll lately with his little sayings. He was talking with Benjamin and Zoë about things no human alive today has ever seen—dinosaurs and dragons and unicorns and the like—and they were trying to convince him that some of those creatures are extinct while others are merely mythological. He got all mad and insisted that extinction isn't real at all, that when a creature goes extinct they merely "go mythological!"

It's a lovely parallel form to "go extinct."

In effort to tame Phoebe and all of her...stuff...and because I've wanted one to go behind the couch for a long time, I bought a storage bench. It was already on sale, which is why I was looking at them (well, technically I was looking because I was up nursing Phoebe late at night and ran out of course readings...so turned to window shopping), but then I noticed that they had a "warehouse" one available that was being sold as "used," but which was "new," just in a damaged box. It was way cheaper, so I bought that one, and now we have a lovely little toy box behind our couch (that says on the bottom "not intended for use as a toy box"). 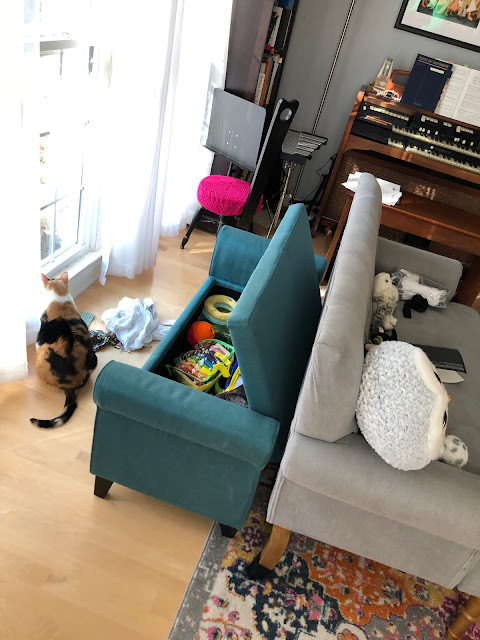 I'm taking that warning about as seriously as I took the warning "do not leave child unattended in this crib" (because, like, how is one supposed to sleep if their baby can't be left unattended inside their own crib?). 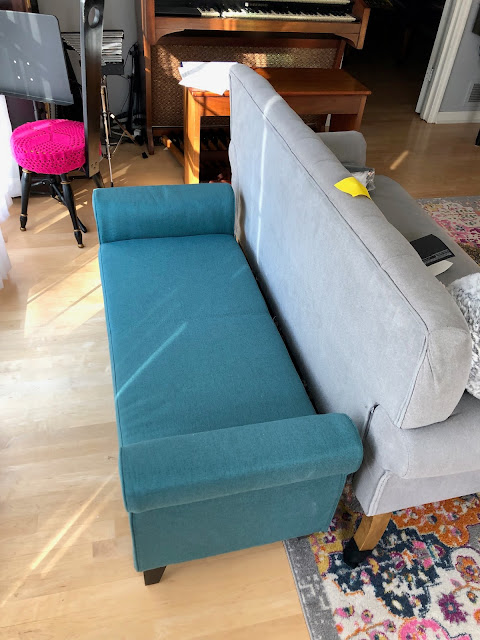 Before this all her toys were stuffed into one IKEA bin and it was too difficult for her to find the toys she wanted to play with (and there were several toys that didn't fit into the bin at all). Now they're all in the bench and she had a lot of fun looking through to find things to play with, as well as climbing up onto the bench (which is low enough for her to do so safely).

The kids built the USS Butterfly out of the box it came in. 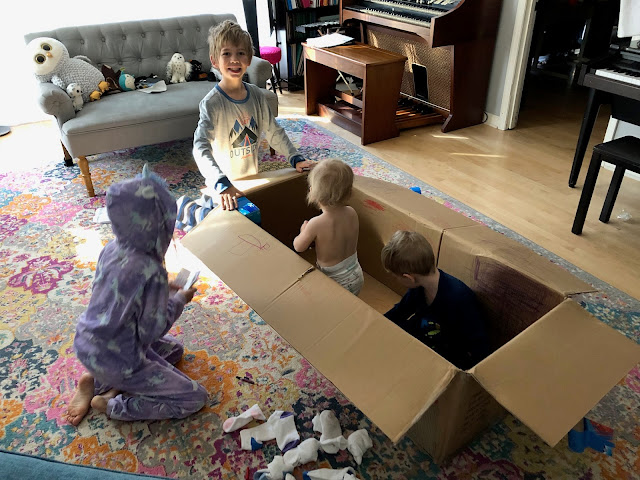 Phoebe was very excited to participate at first: 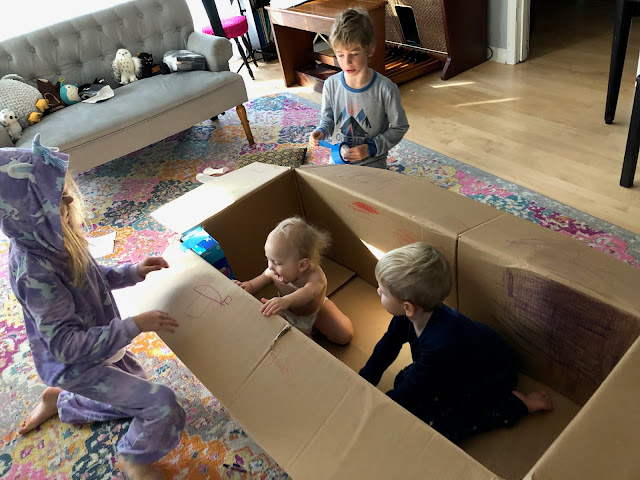 And then got sick of being a participant: 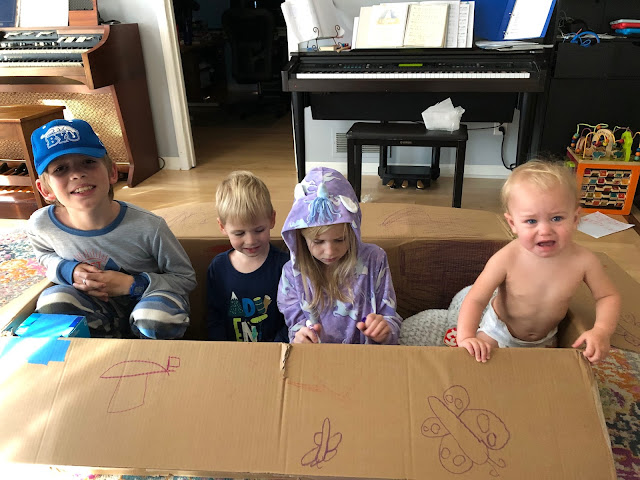 Here's Phoebe looking through her toys (with some serious bedhead): 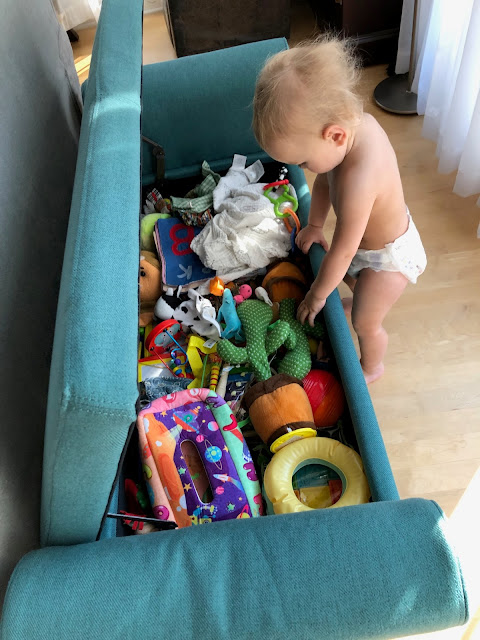 And here she is visiting the cat while gnawing on a teething ring that she found (which I think is the one that Ireland accidentally left behind when she visited last February, and which I had meant to bring back to Utah with me in September...but forgot to): 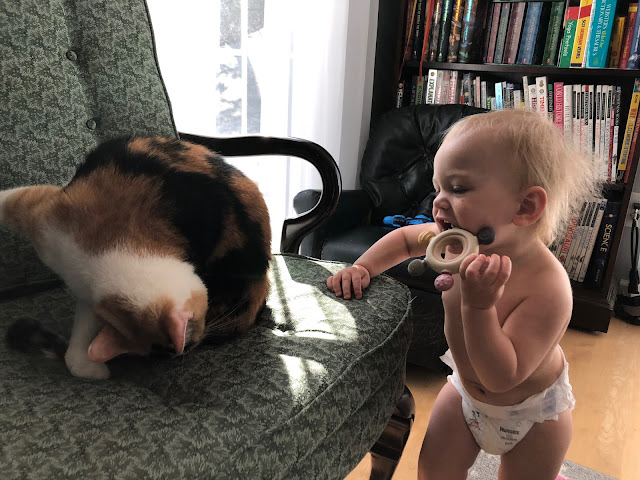 Here is where I reminded the children that we have rules for a reason...and I shouldn't have let them bring crafting supplies into the music room...because within ten minutes of pulling my new bench out of the box Phoebe drew on it with a yellow crayon (here on the arm, and then all over the seat of it, too, but I managed to get it all out, I think). 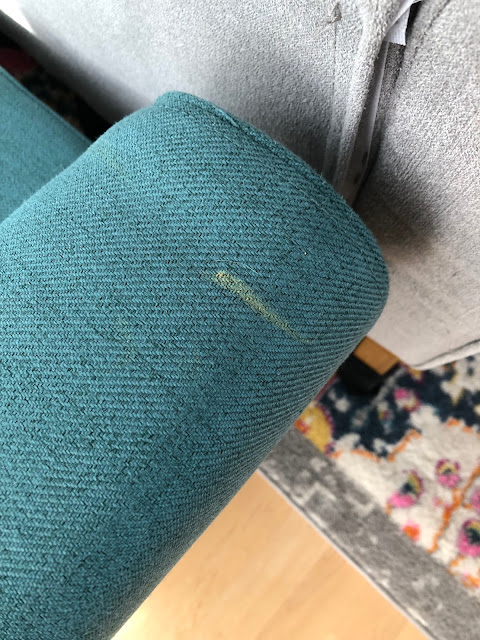 So the USS Butterfly was moved closer to the dining room (where most of our homeschooling and crafting takes place, even though we have a dedicated "art table" in the basement). Here's Waffles playing with the butterfly toy we put at the back of the USS Butterfly: 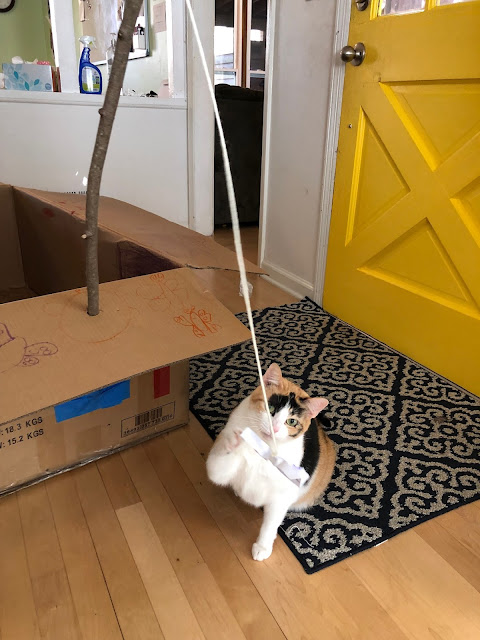 Ever since Phoebe and Waffles figured out they have a shared affinity for toilet water, they've been better friends. Phoebe, of course, has always been enthusiastic about their potential relationship. It's Waffles who was...well...waffling. But it looks like Waffles has decided that perhaps Phoebe is not as bad as she thought she was in the beginning. 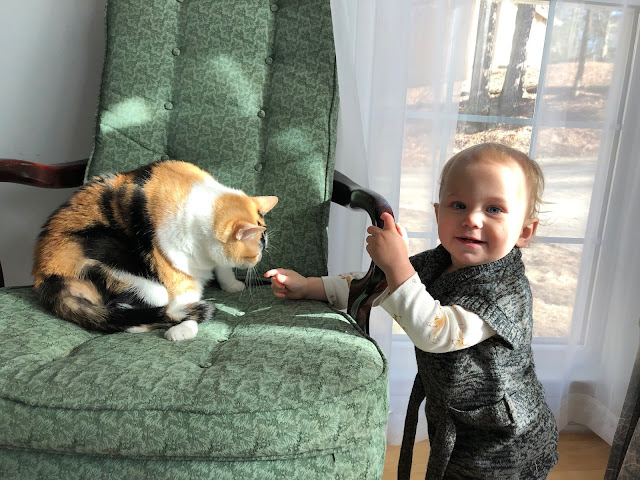 I still have to lock Waffles in the basement sometimes when I'm busy because it can be just too much work for me to make sure they're being nice to each other, but I think they're making headway. 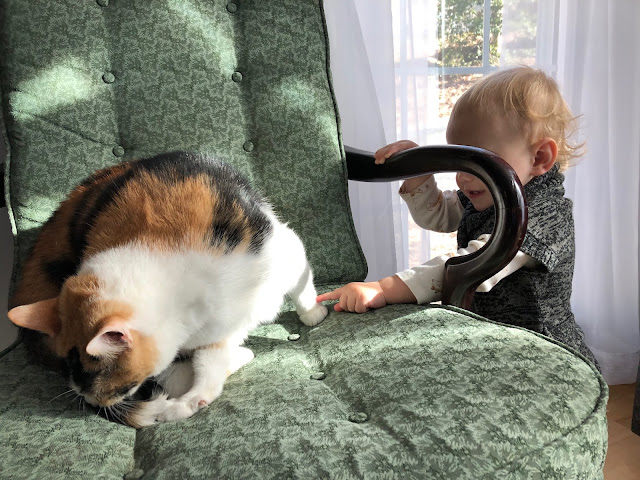