Like that nightmare where your teeth keep falling out...

On December 14, as you recall, I yanked one of Zoë's front teeth out. And it was horrifying.

She's had her hands in her mouth, wriggling those incisors back and forth like she'd been hired to conduct mechanical stress tests on her teeth, for weeks now and we're all thoroughly grossed out by it all.

So we all rejoiced when Andrew finally convinced her to let him pull out her other front tooth. We missed having her two front teeth out by Christmas, though we did manage to have them both out for Epiphany (January 6)! It wouldn't have mattered, anyway, because Zoë flew into a fury anytime anyone suggested she sing "All I Want for Christmas is My Two Front Teeth" for us. 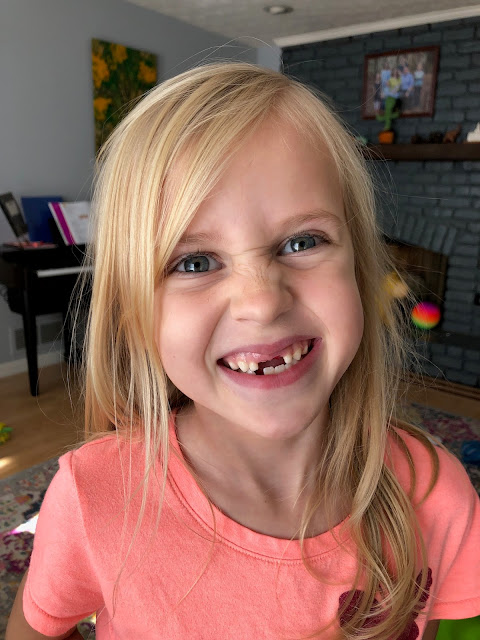 Then yesterday (January 7, Orthodox Christmas), Zoë popped out her lower left incisor.
That's two teeth in two days, three teeth in three weeks, and six teeth total that she's shed so far (which just happens to be the same number of teeth that Phoebe has in her mouth, though Phoebe has the top four and bottom two present and in this picture Zoë is only missing her top two teeth and her bottom lateral incisors because her bottom central incisors have already grown in).
Last night she requested polenta for dinner since she wasn't sure how much she'd be able to chew otherwise.
Suffice it to say, teeth shedding has been a real saga for Zoë lately. There have been tears and prayers and so much teeth wiggling (to the point of not being able to focus on her schoolwork because she's just wiggle, wiggle, wiggling).
I'm hoping for a bit of a break.
Meanwhile...and I can't remember quite when...but sometime in the past three weeks...
Benjamin finished his morning winter-break routine, grabbed a granola bar, and announced he was going to go see if R— could play. Less than a minute later he was back in the house.
"What are you doing inside?!" Rachel screeched at him (sometimes our oldest sisters prefer when the little kids choose a destination and then stick with it).
"I broke my tooth!" he said, panicking. "I took a bite of a granola bar and it just popped right out of my mouth!"
"Let me see," I said, and upon investigation I concluded that he'd had a loose baby tooth and it simply could hold on no longer.
"But there's still some of it in my mouth!" he protested.
"That's a healthy grown up tooth coming through," I explained. "As your adult teeth start pushing through, the roots of your baby teeth start dissolving—that's why baby teeth get wiggly. Sometimes you'll have an opening left for a while before the big tooth erupts. But sometimes your adult tooth will be right there ready and waiting when your baby tooth falls out, as we're seeing today."
"I didn't even know I had a loose tooth!" Benjamin said.
"You're really not that observant," Rachel muttered.
And...she's not wrong...I had to point out to him that he had a loose tooth the first time he lost a tooth.
He just doesn't pay very much attention to these kinds of things.
For those counting, that's four teeth in three weeks!
Posted by Nancy at 9:56 PM