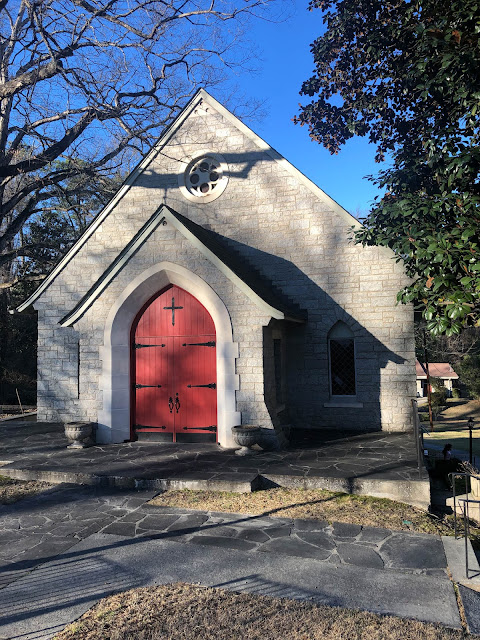 Fortunately, both of the organ teachers she's had out here had already been encouraging her to categorize her musical repertoire—keeping a list of pieces she's learned well and can brush up at a moment's notice—for reasons just like this. She's actually been categorizing her teacher's organ music "by genre," as she told us the other day (part of her duties as studio assistant).
"I've got wedding, funeral, Christmas..." she began.
"Those are genres?" Rachel scoffed.
"What were you expecting?" I asked. "Sci-fi? Rom-com? Murder mystery?"
We listed various genres until Rachel felt adequately ridiculed and conceded that in a musical sense, these genres made sense. Anyway, as Miriam has been creating a spreadsheet of music for her teacher (with a picture of each book she has, along with the table of contents, along with the "genre" of song), she's been creating her own similar list of music she owns and has learned.
She pulled out her "Wedding Ready" list (or "Redding Weddy" list, if you will) and set to work creating a flyer for Becca to peruse. 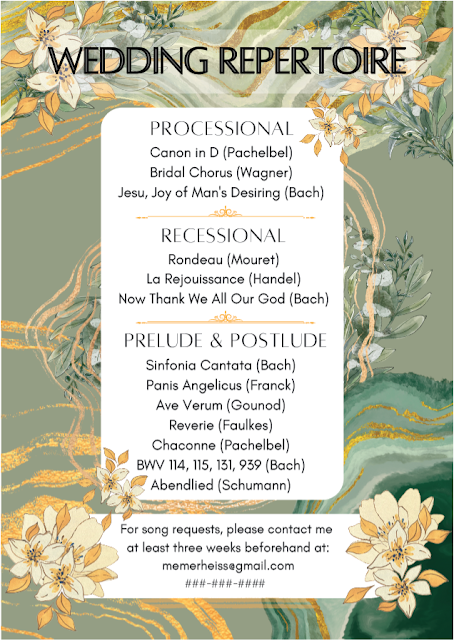 Miriam practiced and practiced and practiced (and her teacher even held an extra lesson for her over the winter break to make sure sure was ready). She was so nervous at the rehearsal that her Fitbit registered 80 zone minutes! Her little heart was racing, but her hands were steady.
The wedding was yesterday and from what I hear, Miriam did phenomenally well (Andrew drove her to the chapel because, well, he is a better driver than I am, but also because Phoebe likes to be close to her milk supply and wasn't prepared to sit through a wedding ceremony). 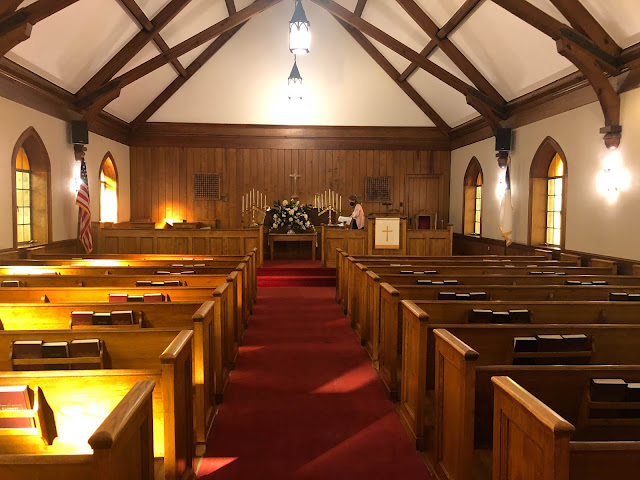 Here are a couple of videos that Andrew took in the chapel while Miriam was warming up for the rehearsal. They got there early so she could rehearse before the rehearsal; she had tried to contact the music director fo the chapel to see if she could learn more about the organ—what stops it has, etc.—but she never heard back. As luck would have it this chapel had the very same organ that is in our chapel, so she felt quite comfortable with it.

She sure was relieved to be playing the recessional, having made it through the ceremony!
This morning she went to church to play prelude (while the rest of us stayed home...since we're still trying to avoid, you know, bad outcomes. With research coming out saying that "even mild COVID can change the brain" and cause issues with other organs. Plus, we're still in the thick of ridiculously high cases of both RSV and influenza, in addition to COVID. We'd like to avoid all three, if possible...and we know members of our congregation are still attending church when they're potentially ill.
We're still trying to finish catching our breath from having COVID this summer. I don't want it again!
I just read a study showing that families with 6 kids have at least 1 person sick for 87% of the year—87%?! (see figure 1). Now, I'm not saying that being sick for 0% of the year is feasible or even beneficial, but 87% still seems like a long time to be sick. And this paper was written in 2015 (that is, before COVID was even a thing).
But, she had some beautiful prelude music prepared and feels pretty far-removed from people when she's up at the organ, so she went with Andrew (who goes every week to play the organ) and lucky—or not—for Miriam, the stake president was there and was so amazed by her organ playing that he mentioned her by name in his testimony (which she was pretty embarrassed about) and asked her if she'd play for the stake youth fireside this evening.
So she's been doing quite a bit of performing lately (though I suppose for church it's not so much a performance as it is using her musical gifts to invite the spirit to the meeting)!
Also, Miriam's organ teacher asked if she would be willing to help teach one of the group lesson sessions. She supervises the group and helps them work on their theory and things while her teacher takes students off for their individual lessons. There's four kids in the class, so they end up each getting one private lesson every two weeks. It works out well!
The exciting part (for us) is that the deal she made with us/Miriam is that Zoë will participate in the group class in exchange for Miriam's service as assistant teacher. So now Miriam is working double time for her lessons (we still pay a pretty penny because professional music lessons are not cheap, but Miriam is getting a partial scholarship for her work as studio assistant, and Zoë is getting a full scholarship for Miriam's work as teaching assistant, and for a 13-year-old that's pretty good pay)!

Oh, also, her teacher suggested that Miriam get the AP Music Theory book to work through over the next couple of years so she can sit that exam once she finishes it. So Miriam has been working through things and her teacher has been checking her work and things.
Switching to this studio has been such a great thing for Miriam!
Posted by Nancy at 11:17 PM