Phoebe-face was incredibly grumpy today. She spent most of the morning screaming. And then we took a nap. And she woke up still pretty grumpy. So she screamed most of the afternoon, too.
She enjoyed eating (because that's pretty much her favourite thing to do). We had a smörgåsbord leftovers for dinner + homemade yogourt and granola. Phoebe really enjoyed the yogourt! 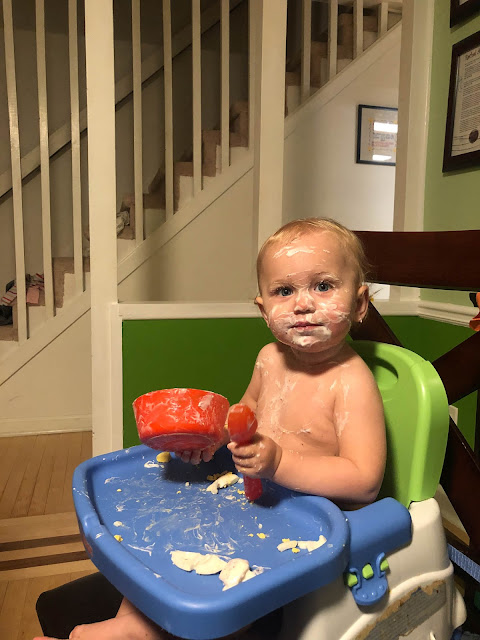 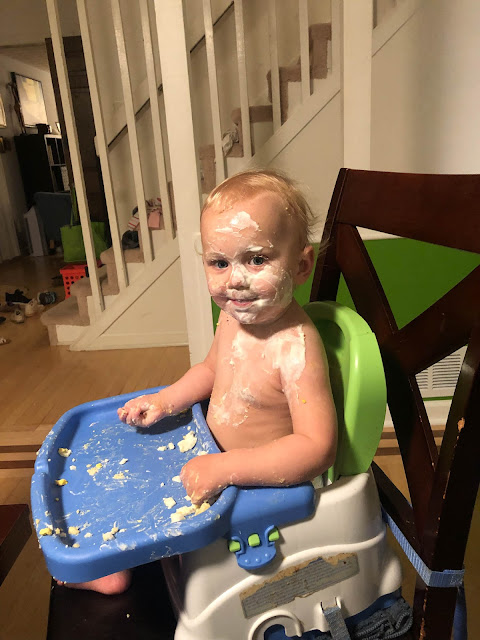 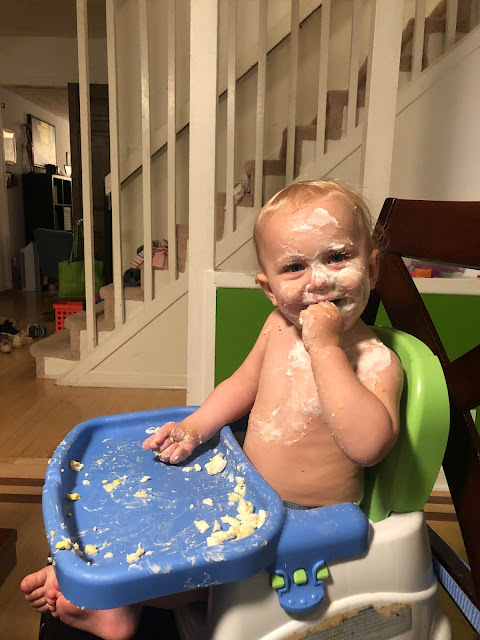 Clean up was not insignificant.

Once we finally finished cleaning off the baby and her high chair, the table, the floor. Once we did the dishes, cleaned out the litter box, emptied the whole house garbage (because collection comes bright and early Monday morning), and picked up the entry way. Once we changed into our jammies and tidied the common areas. Then we were ready to play a game.

It can be hard to find a game to play with our whole family (and we're not even counting Phoebe yet, or even Alex, really). Tsuro is a good one. UNO. Phase10. Normal things like that. Poetry For Neanderthals is a favourite. We play What Do You Meme? quite a lot...

But sometimes we feel kind of stumped.

Last night Benjamin suggested we play Danger 13. Technically that game can only handle 5 players, but we often play with more. So we were getting it out and Quarx caught my eye.

I remember we'd tried playing it when we first got it. We didn't quite get it. Or it was too hard for the majority of our players. Or something. Whatever the case, we hadn't played it in a while. So we decided to play that game instead (since it's designed for up to 6 players and we had 6 players). We pulled out the rules and learned how to play and we all had a good time.

You have to count spheres and then use your personal set of cards—1, 2, 4, 8, 16—to add up to the number you counted. When you've finished adding things up, you slap your guess on the table and announce your order (First! Second! Third! and so on) because you earn extra points for speed. The tricky part is that you also score points for accuracy.

It doesn't sound tricky to count items and then make up a quick math equation—on the contrary, it sounds pretty straightforward—but it actually gets quite wild with everybody muttering and tapping to keep track of their counting (you can't touch the cards while counting) and then trying to add things up correctly all while racing to be first.

Mistakes were made. Many of them!

Zoë had a little trouble at first (the game says 10+ and she's only 7, so...that makes sense), but she's caught on and we've found that if we're...generous...with how we award points we can keep her playing happily longer.

Anyway, we enjoyed ourselves so much that we played it again this evening (and then Andrew gave the kids a lesson on binary coding afterwards).

Alexander and Phoebe coloured while we played. Colouring while others are playing games is one of Zoë and Alexander's favourite things to do (though Zoë is getting old enough that she wants to participate in the games more often these days). Phoebe...well...I mentioned she was grumpy.

Phoebe enjoyed colouring as long as Mommy's attention was transfixed on her.

I had her buckled in her highchair next to me and we were working on a picture together. She was colouring and I was dooling. And she'd be perfectly content (well...maybe not perfectly).

But then we'd initiate a countdown to flip over our Quarx cards and I'd have to put down my crayon and stop colouring so that I could use two hands to flip over my card, count the spheres on everyone's cards, and put together my math equation, and Phoebe would unleash the most awful screaming. Fortunately for everyone at the table—and not to brag, but—I was typically the fastest to complete my counting and math-making. So then I would abandon my cards and pick up my crayon...and Phoebe would immediately stop screaming and start colouring on her paper. I'd colour with her while everyone else did the official count of the spheres, checked everyone's math, and awarded points (while I was typically the first one down, there were definitely times when I either counted wrong or added wrong and got no points at all (but I also won several rounds, so it worked out)).

Then we'd initiate another countdown and I'd put down my crayon and...

That silly baby! I sure was grateful when bedtime rolled around! Here's hoping tomorrow is...less...scream-y.