Phoebe turned 14 months on Friday the 13th!
She is 100% a walker these days and only crawls in the most dire of circumstances (like when the vacuum comes out and she has to get to safety fast). She suffered a few bumps and bruises along the way to foot-fluency, but her balance is pretty good these days.
She loves to eat—things she's supposed to...and things she's not.
Today I was reading her a story on the couch before church when she heard the microwave beep. She scooted off the couch so fast and ran to the kitchen to see who was cooking what and whether she could have some.
Miriam was warming up some chicken noodle soup (we're all sick over here) for breakfast...and she did share with Phoebe. 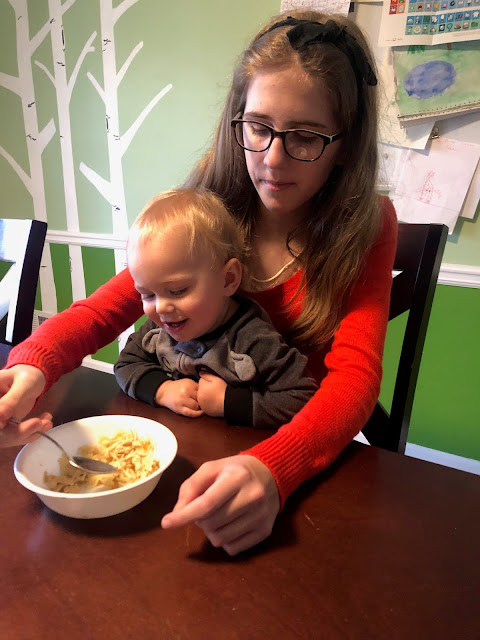 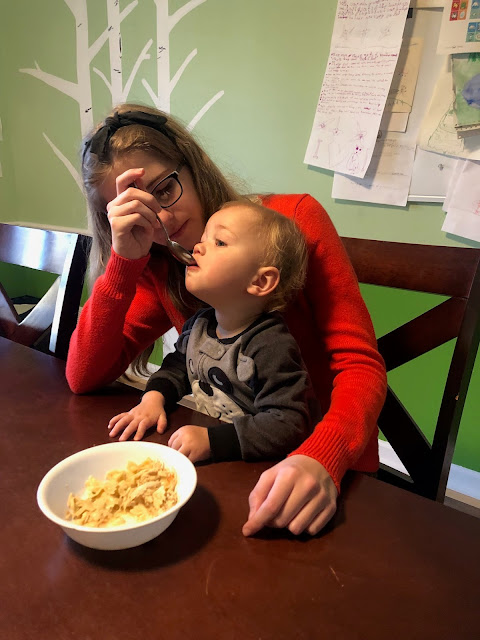 The kids enjoy drawing during sacrament meeting. Phoebe enjoys eating crayons. Note the rainbow confetti around her lips (and ignore the snot remnants; she's been running like a faucet)... 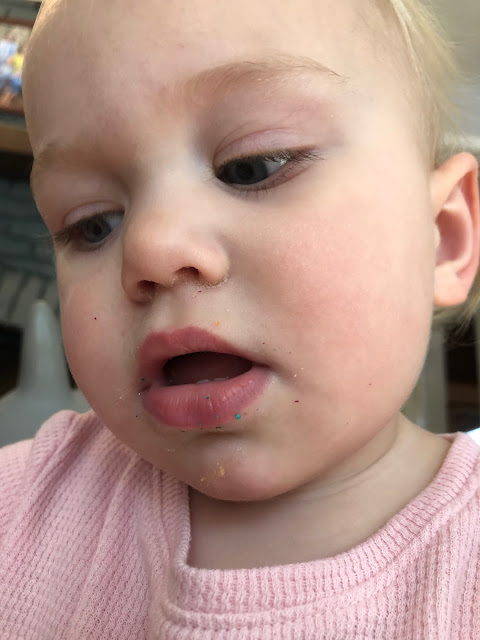 Speaking of "the kids," that's one of the words Phoebe can say! So far we've heard her say:
She knows Rachel is Rachel, and I'm sure she knows Miriam is Miriam, but as for the other three, who always seem to move in a pack, they're "the kids." I didn't realize how often I refer to them as that until Phoebe started pointing at whichever one of them and saying, "TID!"

"Let's go check on the kids!" I say to her whenever she wakes up, whenever it gets too quiet in the house, whenever...
At any rate, she ran up to Alexander today and gave him a big hug, proclaiming, "TID!" And she's called Benjamin and Zoë "kid," too.
She loves giving hugs and kisses, though her kisses are usually stealth kisses. She prefers to come up to you and kiss your knee or your back, rather than aiming for your face. She loves to kiss the cat. They're friends now...they bonded over toilet water and everything's fine between them lately.
This evening the kids were getting a plate of cookies ready to run over to the neighbours (their dog died the other day). They had left that plate of cookies on the bench while they finished up making their cards.
I was cutting up things to go with our very colourful dinner (we had red tomatoes, orange sweet potatoes, yellow mango, green guacamole, and blue berries on the table, as well as lettuce and red, orange, yellow, and green bell peppers) when I glanced over and saw that Phoebe had not one but two cookies in her hands. 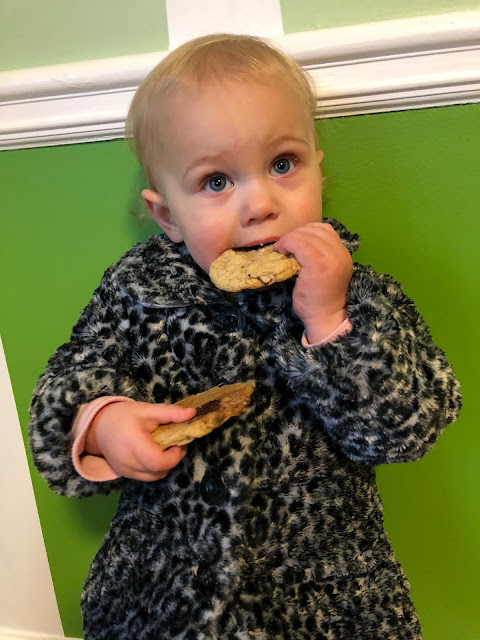 "Oh, no!" I said. "Phoebe's got cookies! How did she get cookies?!"
Well, we soon figured out how! Phoebe saw her chance and decided she'd better make the best out of the situation—two hands calls for two cookies!
She was not at all remorseful: 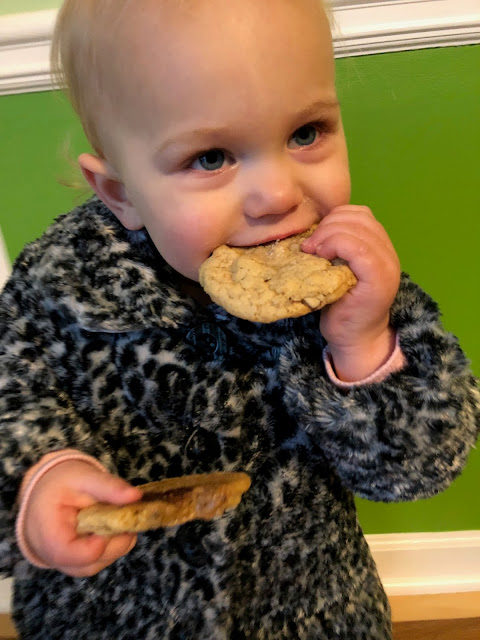 She was still wearing her coat since we'd just come in from a walk. And now her coat needs to be washed and dried before we go outside again because it is covered in chocolate. 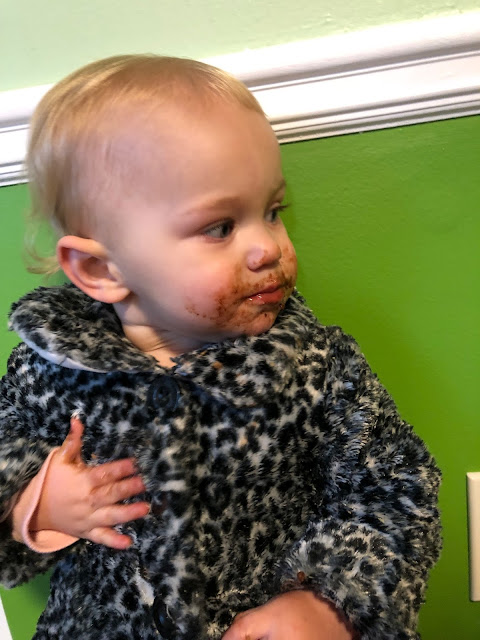 The other night at dinner we learned that she knows body parts! She probably knew before us, but we were all fascinated when she suddenly started pointing out her facial features. I can't even remember how it started. I think I must have said something like, "Wow, Phoebe! You have a little dinner on your nose."
And then she touched her nose.
And we were all like, "Did she...did she do that on purpose?!"
So we started quizzing her and it turns out she was doing it on purpose. She knows eyes, ears, mouth, nose, head, hair, hands, toes, and bellybutton. And...she ended up getting dinner on a lot more than just her nose.
She's very enthusiastic about pointing out body parts—to the point of pain. After asking her to locate her eyes, for example, we then have to beg her to stop gouging her poor little eyes! A gentle touch will do!
And she can stick her finger up her nose so high! We were all wincing. Stop, Phoebe! Stop!
She loves music. She loves to wave her arm when we sing church music (as if she's conducting) and she likes to spin and dance now that she's up and walking around.
She likes books, but doesn't particularly enjoy being read to. She wants to be the one to hold the book and control the page turns. So it makes story time difficult.
The person she likes to read with the most is Rachel, for whatever reason.
She loves to brush her hair, she hates to brush her teeth.
Her favourite activity is probably just...messing stuff up. She likes to open drawers and pull everything out. She likes to open cabinets and pull everything out. Basically, she likes to open thing and pull stuff out. But not, like, her toy box (boring). Just the stuff she's not supposed to get into.
She likes to help empty the dishwasher. She knows where the silverware goes and will put it away (just by chucking it into the drawer). She will often lick every piece before she puts it in the drawer because she is such an oral explorer.
She stayed up from 8 am to 2 am the other day, taking only a short nap while nursing. It was brutal. Andrew even took her for a drive and she just...kicked her legs and sang to herself the whole time. We thought for sure she'd fall asleep in the car, but no.
And then, like, do you think she stayed asleep after 2 am when she finally fell asleep?
She absolutely did not. She was up by 3:00 and then up every half hour or so until the morning (which she decided was 7:00 that day).
One day we'll get some real sleep around here, though I don't know when. We really thought we had turned a corner not too long ago...but we were mistaken and we're back to a miserable schedule...so it's a good thing she's cute!!
Posted by Nancy at 11:17 PM