Last night for FHE we played "Lego-nary," which could definitely use a better name. It's like "pictionary" but with Lego instead of pictures. We just paired up and spent 8 minutes putting together a Lego interpretation of a scripture story (with pictures for inspiration) and then we had to guess what story each pair had made and then each pair had to share a retelling of their story.

It went well. Everybody loved it. Everybody made awesome-looking scenes...except for me and Phoebe. Our team underperformed, but that's okay.

Here's team "Daddy and Zoë" with the story of Jesus cleansing the temple: 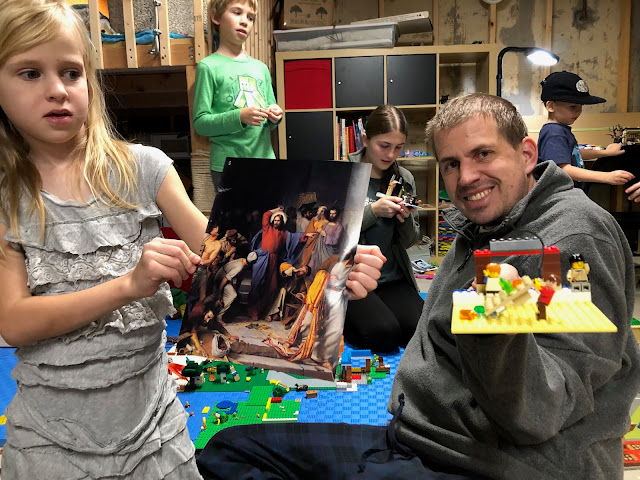 Here's team "Benjamin and Rachel" with the story of Lazarus (the tomb even opens and closes): Here's team "Miriam and Alexander" with The Last Supper: 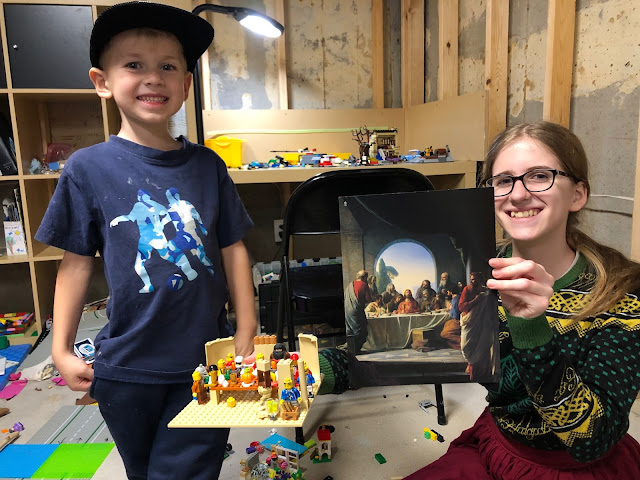 And here's my teammate, Phoebe, who kept shoving Lego bricks and crayons and whatever else she could find in her mouth while running around the room trying to destroy all the Lego creations she could...instead of helping me like she was supposed to be doing! 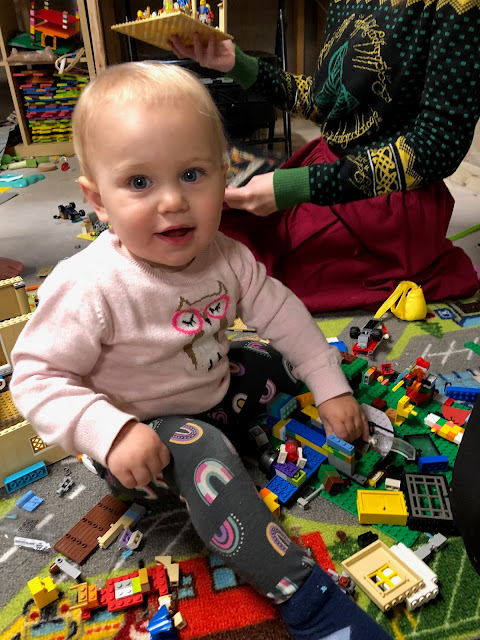 Here's Andrew taking pictures of our individual projects all together: 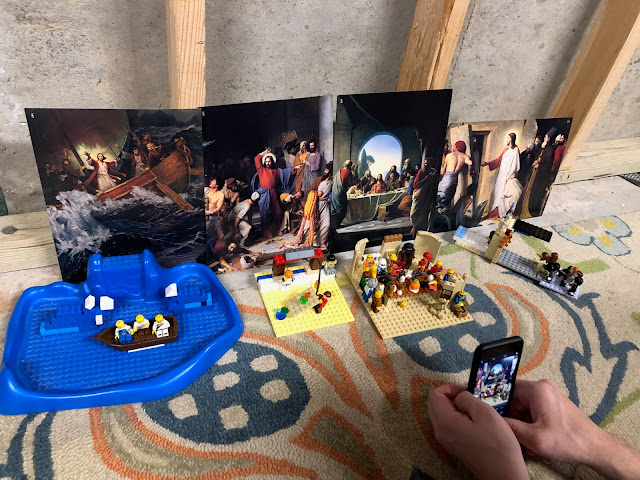 And here they are, beginning with the derpiest project and then proceeding in no particular order: 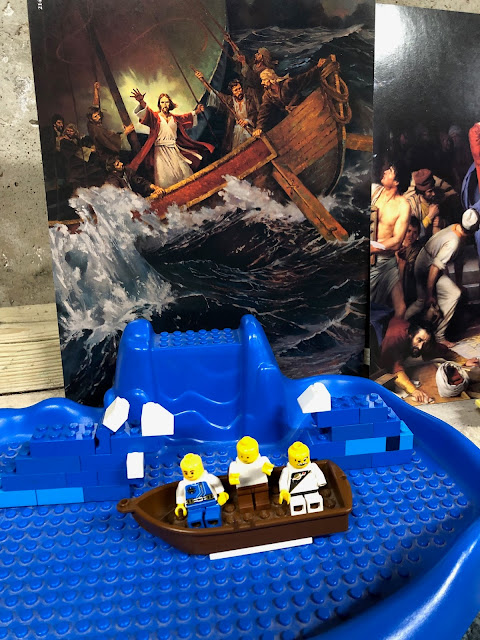 Phoebe and I did The Calming of the Storm, obviously (or perhaps not so obviously). 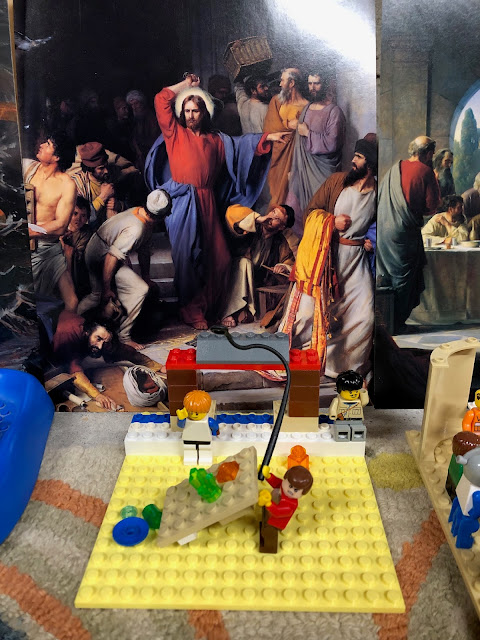 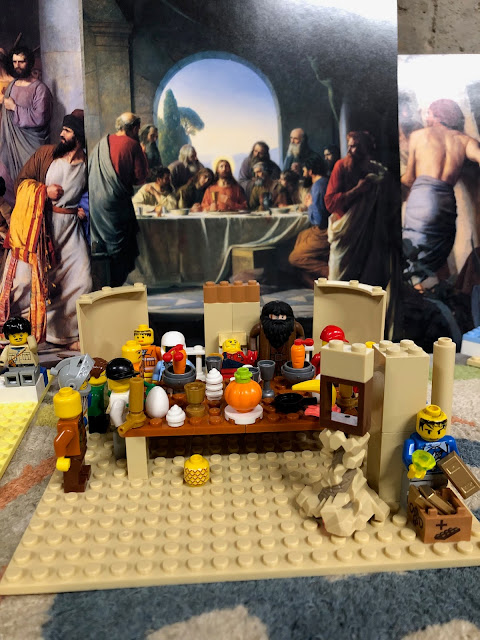 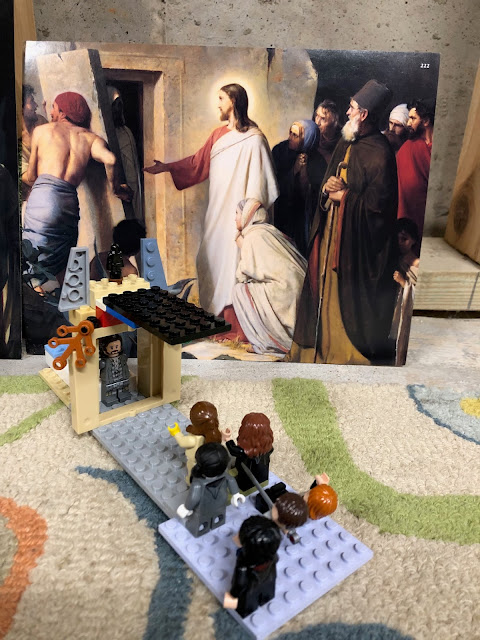 We spent a few minutes doing a flash clean of the basement and then went upstairs to eat a cake Rachel made (for no reason other than she wanted to make a cake with black cocoa to colour frosting; her design is based off the window in the show Wednesday): 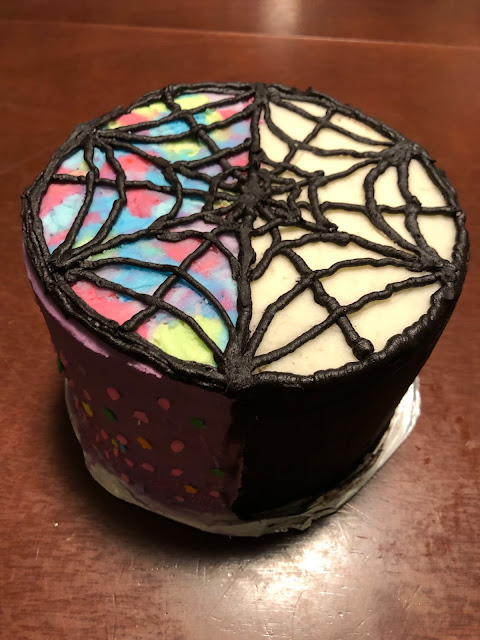 Then we read scriptures together (New Testament this year, which feels refreshingly easy to read after spending last year in the Old Testament), and then Alexander was chosen to say family prayer. We've recently had lessons about saying mindful, meaningful prayers, and he was all over making sure he was really thinking about what he was saying.
We've all been sick, so he knew he wanted to pray about that!
"...and please bless us all to feel better," he said and then paused to reconsider things.
It's true that he's been sick, and Benjamin had been sick, and Mommy and Rachel and Miriam and Phoebe had all been sick...
"But not Dad!" he said decidedly.
Someone gasped or tsked or grunted or something. I can't remember who.
"What?" Alexander asked with a degree of annoyance, eyes still glued shut with reverence. "Dad's not sick!"
He wasn't wasting any divine requests on a healthy person!!
"Dad is sick now," I whispered.
"He is?! He said he wasn't!"
"He wasn't. But then he started feeling sick. So now he is."
"Oh. Okay. Fine, then. Bless Dad, too!" he said, with the same sort of energy Maria the governess tacks on "God bless Kurt!"
Unfortunately for Daddy, he did not wake up feeling better this morning. He woke up feeling worse. He took a COVID test, just in case, though we were already 99.99% sure this illness wasn't COVID (since we're already feeling better) and...his test was negative. He felt he should make sure before attending class this evening.
Anyway, Alexander has been on a funny vocabulary bend lately.
The other day we were out walking and when we returned home there was an unmarked delivery van parked in front of our house—just some truck contracting with Amazon.
"That truck is pretty sus," Alexander said. "Don't you think?"
"Do you even know what that means?" Miriam asked.
"It's short for suspicious. And it's pretty suspicious to have an unmarked truck just sitting in the cul-de-sac. Do you think it's kidnappers?!"
***
And then there's this little exchange that occurred after I asked Alexander to wash his hands after coming inside from outside...
"Did you wash your hands, buddy?"
"Mmmhmmm," he said, nodding confidently before enunciating, "Potentially."
I narrowed my eyes at him, pursed my lips.
"What do you mean...potentially?"
"I stuck my hands under the faucet while Benjamin was getting a cloth wet and they came very near to the clean water, so...yes...potentially."
"That doesn't sound like very good washing to me..."
"Did I mention the water was clean?" he asked.
***
Getting near clean things is almost the same as washing, right?
Here I will tell on both Zoë...and me.
She was in charge of cleaning the kids' bathroom not too long ago and I was unimpressed with the job she'd done because it looked like she hadn't done anything. She insisted that she had cleaned the toilet. I failed to see how she could even make that claim.
"How did you clean the toilet?" I asked. "Did you wipe down all seven layers of the candy cane forest?"
Toilets are like onions, you see: you have to wipe down the top of the lid, the inside of the lid, the top of the toilet seat, the bottom of the toilet seat, the rim of the toilet, the outside of the toilet, the top of the toilet...not necessarily in that order.
I think we counted them up once and there were seven layers, so we just ask about the candy cane forest (rather than onions) because there are seven layers to the candy cane forest as well.
"Well, I didn't do that," she said. "But I did was the inside of the toilet."
"Can you tell me how you did that...because I'm just not seeing..."
"Sure. I poured some vinegar into the toilet..."
"Okay."
"...and then I flushed it down!"
"Right...so...you can't just flush vinegar down the toilet. You have to scrub it, too."
"I didn't know!"
"Well, that's why we have toilet brushes..."
"I was wondering about that."
"Sure you were."
****
Fast-forward long enough time for the toilet to be needing a good clean again, and find me, having replaced some batteries in a toy, and having had to clean up a little battery corrosion in the battery casing, with a little dish of leftover vinegar (which is excellent for removing battery corrosion).
Feeling resourceful, I figured I would simply dump that leftover vinegar into the kids' toilet and let it...marinate...so that I could scrub the toilet.
Then I forgot about having done that until it was time to go to bed.
I had completely missed my opportunity to scrub the toilet; the vinegar had been flushed long ago.
I laughed about it a bit, and told Andrew what I'd done, and he said, "That's the Zoë method!"
It's not a very effective method, but I can see how it could potentially get things clean!
Posted by Nancy at 10:23 PM