This morning I went to Andrew's cousin's wife, Sarah's baby shower. That was really pretty fun. A little awkward since I still don't know many people on Andrew's side of the family very well, but Sarah and I are in that boat together, so I suppose if she can go to a shower where she hardly knows anyone, then so can I! Sarah and Nathan got married the day before Andrew and I did.

*****
My sister Abra turned...well, I suppose I'll just say she had a birthday on Tuesday. My other sister, Kelli, had her birthday today. We all went over to my mom's house for dinner (and cake and root beer floats). Besides which I am singing in church with my mom tomorrow so we had to practice.

Kelli and the twins are spending the night at my parent's house, so right now, Andrew is helping Kelli with her algebra course. She asked me to help her! Fat chance of that!

Anyway, here are some pictures from her birthday party. It was pretty low key, and I definitely had a hard time taking a picture of her. She kept hiding. I eventually convinced her that her picture would look fine if she'd just hold still and smile! 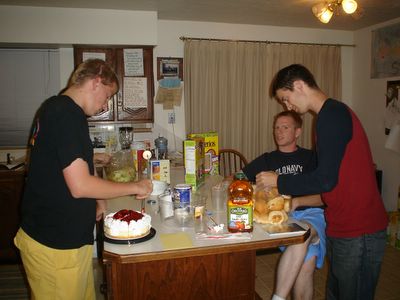 Sabrina in heaven with a bun. A look of pure contentment... 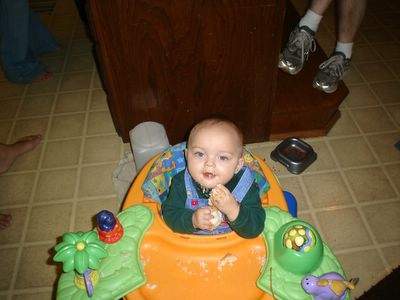 Us Singing "Happy Birthday" to Kelli

Kelli, the girl who never pauses for a picture. 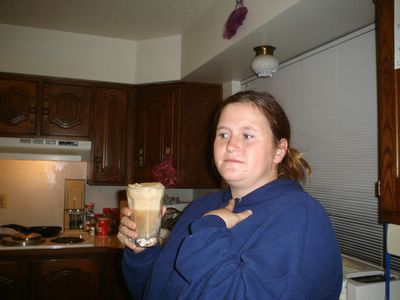 Mom--I also have had a hard time getting her on film.
Caught in the act of cleaning up. 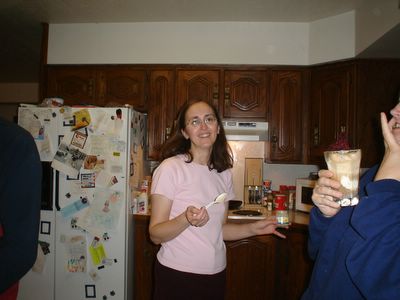 You'll want to zoom in for the next picture. David thought that I had already taken his picture so he made a face at the camera, right when I took the picture. 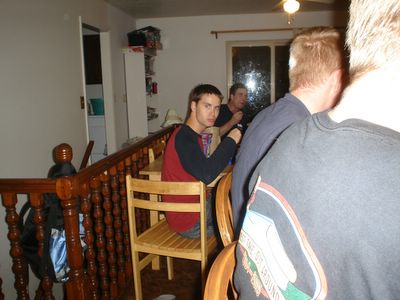 Speaking of David...there's a really funny story about him. My mom asked him to sign the card for Kelli. He went and did that and then left the card in the other room. My mom walked into the kitchen and said, "David, where did you put the C-A-R-D?"

We spell a lot of things out in our family because...well, it's just what we do. The idea is that if you spell a word out that the "children" will have no idea what you're talking about. In this case, the child is nearing 30 and knows very well what C-A-R-D spells. Not that it really matters. When we were young children it wasn't uncommon for one of us to say, "Mom, can I have a coo...I mean a c-o-o-k-i-e?" Or to say, "But I don't want to go to bed" in answer to "Should we put the kids to b-e-d?" We all can spell, and because our parents insisted on spelling things over our heads, learned to spell at a young age. At least, we could all spell cookie, cake, nap, bed, dessert, McDonald's, and a few other key words.

Anyway, David went to answer my mom's question of "Where's the C-A-R-D?" by spelling back to her. He said, "It's on the D-E-Eeeegh..." Then he burst out laughing. My sister Kelli also burst out laughing. They tried talking to each other but were laughing too hard. Everyone was left in the dark. Finally Kelli gets out, "You're...trying...to..." and then before she can finish has a laughing fit. So we all waited around for an answer to why they were laughing so hard. Giggling along in that uncomfortable I-really-have-no-idea-what's-going-on-but-I
-feel-left-out-if-I-don't-laugh-too way.

As it turns out, he was trying to spell "DVD player" but couldn't decide how to spell DVD. Is that D-V-D or is that D-E-E-V-E-E-D-E-E? D-V-D is a little too obvious, if you ask me. We all had a good laugh about it. Man, spend one night with my family and I'm not sure you'd consider any of us of normal intelligence. 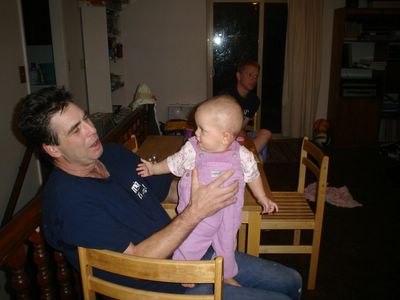 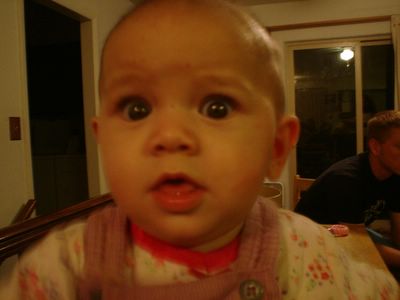 After dinner at mom and dad's house, Andrew and I went home to clean up our house a bit. We invited Kelli (and the rest of my family), as well as Andrew's family, to play games at our apartment. Kelli put the twins to sleep and then she and Josie headed over. Andrew's parents and Emily also stopped by. It was a pretty fun evening, even with all the silly antics going on!

Here we are playing Mexican Train 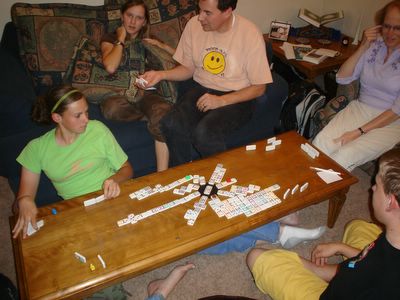