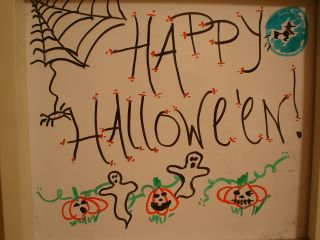 So, we're sitting at home with who knows how much candy and do you want to know who all's come by? Go ahead. Take a guess about how many children have wondered our way...Z-E-R-O! That's right...not one. And just when we were feeling the lowest of low, Sarah and her friend Becca stopped by. They don't really count as children since they are 17 and 18 and dressed as "cowgirls." Sarah had on jeans and a shirt with her hair in pigtales. Becca at least went through all the trouble to wear overalls and put some freckles on her face. We gave them candy anyway and had a nice little visit with them. So, now we're sitting at home, yet again...wondering if any children are going to stop by. I somehow doubt that since it is like...oh, 8:00 pm. Bummer. I'm sure we'll eat all that candy--over the course of the next 3 years!

Yesterday for Family Home Evening, we didn't ever get to carve our pumpkin. That's still sitting on our counter. Sad. I know. But, we had a good time anyway. We went to Sarah and Emily's marching band concert. They were so good! I was impressed. Andrew was impressed and he played for the BYU marching band.

It was so cold though! I really felt sorry for them! Especially Sarah, whose dance costume is short sleeved. Brrr... I was cold and I was in the stands with my winter coat and fleece blanket snuggling up to my warm husband!

The Band in Formation 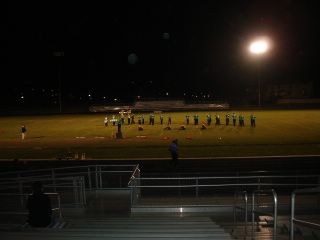 Sarah, if I remember correctly, is the girl on the far left in the picture below. She's pretty wild and crazy. I think the band director described her as something much worse than that after she did a silly little dance on the field when he announced her name. She's pretty happy to have this be over so that she can have more time to devote to other things: like earning a 4.0! 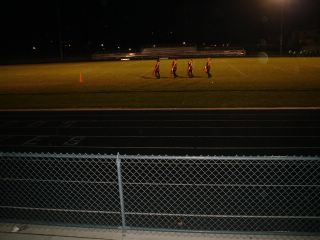 Now, Emily. She's the 5th person from the left in the picture below (the one with the flute, not the suzaphone). She looked so great walking in. Marching band has become one of her passions. When we went to Sarah's (Nathan's wife) baby shower, Sarah's little sister was there. She's in the marching band at USU or SUU or UofU...I can never get those schools straight. Anyway, she and Emily had a good conversation about marching band. They both love it. Emily wants to go into music education once she graduates High School. I think that would be a good fit for her since she already plays a million instruments. She was very sad that this was their last performance, although...there's always next year. She was blubbering and weepy so Andrew and I were being kind of silly with her. As we were walking to the car she said, "Stop it! I'm trying to be depressed and you're not helping!" It was pretty funny. Don't make Emily smile or laugh when she's upset or you'll get what's coming to you!

In marches the band... 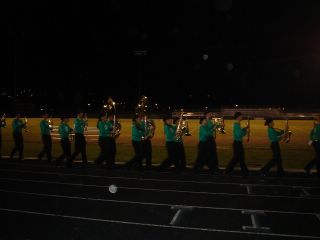 Here's the first of their musical numbers that they performed. It was a pretty short concert--only 15 minutes long. Andrew things that's because they only know one show. Since this is Timpanogos' first year with a marching band, I wouldn't doubt it. It's a really good show though!

Emily, Sarah, and another kid from their ward 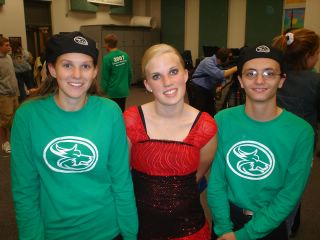 After the concert, Andrew's parents took us all out for dinner at the "New Chinese Buffet" restaurant. I was very confused about this. They told Andrew to meet them at the "New Chinese Buffet" place. He was like, "Okay!" And we were off. I was like, "Do you know where this is?" He's like, "Yeah. It's right on State Street." I was thinking in my mind about any new buildings that have gone up on State Street recently and I certainly couldn't think of a new Chinese restaurant. We get to the restaurant and it's one I've seen before. In fact, it's been around for years. The name? "New Chinese Buffet." Boy, did I feel sheepish!

Having a Chinese food buffet is really a good idea. I always want to try a little of everything, so this way I could. Unlike other Chinese places that I've been to where you have to choose only one or two items. Here, the choices were limitless. We had a very interesting dinner converstation at the restaurant. I'm not sure that the tables beside us appreciated it much, but it certainly was entertaining!
Posted by Nancy at 10:09 PM