On Saturday, Kelli had a Halloween party for her kids and their friends. Mom, Josie, Andrew and I all went to help out. It ended up being a success. As Ricky said to his mom, "This party is so much fun!" So, I guess by his remarks we can feel like we did our jobs. We were really worried that there were going to be a ton of kids there when Kelli told us that she "didn't deliver all 50 invitations." I was like, "Whoa! Are you out of your mind! I would have invited like 10 kids. Maybe 5!" But, judging from the turnout we have (not to mention the lack of RSVPs) that our family tends to receive, I shouldn't have been surprised that we ended up with a great number of kids. There were about 15 in total.

Josie and Rosie dressed up as Bindi Babes...aka: Indians. Josie picked up her costume while she was in India this summer, and Uncle Bruce brought back salwar kamises for all of Kelli's girls. The twins stayed inside though, so they didn't dress up. They will be dressed as Indians on Halloween though. 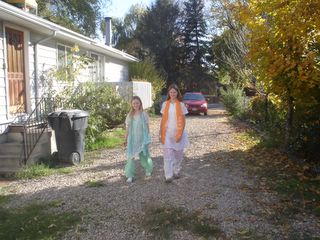 I think it is so nice that the weather has stayed warm enough to have a Halloween party outside! The weather was perfect.

The first game we played was a "spider web" game to get to know each other. Kelli started by saying her own name and while holding the yarn, said the name of another child and tossed the ball of yarn to them. They would catch it and repeat what she did, passing it to another child. Because each child was holding on to the yarn, it made a nice spiderweb effect. That's little Andrew in the dragon costume (by the french fries).

Andrew and the Spiderweb 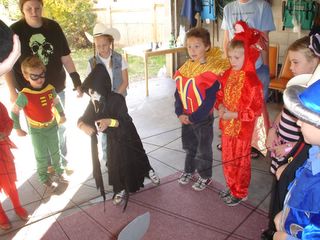 Cute note on the Robin kid. He was so funny! We kept calling him Robin because we didn't know his real name. He would then look at us, sigh a heavy sigh, pull his "mask" up onto his forehead and say, "It's me, Warren." It was so funny just because the mask really didn't hide his identiy at all. But then, Lois never did figure out that Superman was Clark Kent, so maybe it's understandable.

The next game was a variation of musical chairs. We passed around presents though, and when the music stopped you got to unwrap a layer of the gift. There were 10 or so layers in all, so it ended up taking longer than I had expected. The kids' attention spans were right where the action was though. They all wanted what was inside the gifts! There's Merlin, er...Matthew, the Wizard, trying to figure out what is in the box! Most of the presents were big, plastic tarantulas. 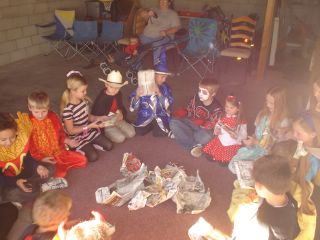 Next we did a mummy wrap. We divided the children into groups of three. They each got two rolls of toilet paper and had a race to see who could wrap their mummy the fastest. One team had Rosie and all of her friends in it. Since they were so much older than a lot of the kids, they were a lot more coordinated and won for being the fastest. Andrew and I cheated a bit though and helped them figure out that if the wrappers held the TP rolls on their fingers that the TP would roll by itself. Then, the person being wrapped could twirl one way while the TP wrappers walked the opposite direction. Yeah, they were super fast. We tried to help the other groups figure out how to invent other fast ways but the children in those groups were so young that they probably still thought that toilet paper was for pulling off the roll and clogging the toilet with!

Josie's group though, made the most authentic-looking mummy. They also spent the most time on it (well, the other group kind of just gave up after they lost so it wasn't hard to spend more time than them). They had the little girl cross her arms infront of her and wrapped her that way. Then they stuffed the empty TP tubes in her arms to make her look like she was holding things, kind of like King Tut. 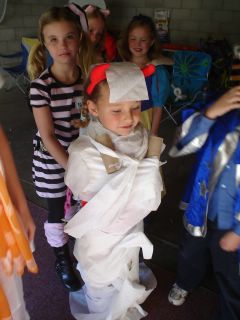 My Andrew's part was to play the "mad scientist." He dressed up in my dad's art smock and did his hair really crazy! Kelli had prepared some cauldrons with different "body parts" in them: a boiled green pepper soaked in jello for a heart; cauliflower set in jello for the brain; peeled grapes for the eyes; spaghetti for guts; carrots for fingers. They were all soaked in jello to make them squishy and slimey. Gross. I'm sure that Andrew had fun though.

I didn't get to see him do this because I was inside with the twins at this point. They are both teething and so are pretty grumpy babies. It was so cute to watch them play with each other though! Olivia has started scooting now so she was "racing" Sabrina, who is getting pretty good at pulling herself around. They were finding various toys, soothers, and other yummy things to put in their mouths. They would find a toy and then carry it over to the other one, hand it to her and steal whichever one she was playing with. Oh, they're so cute!

We had to leave the party early to take Emily out for Sadie's...so we did that. As we were driving home, Emily told us not to bother! She found her own ride. Of all the nerve!

So, Andrew and I went out for dinner by ourselves (still to Wendy's where Emily was planning on going, although we didn't see her there). We also went and got some ice cream at Sub Zero, a place where they make ice cream with liquid nitrogen and where Andrew and I had our date before he asked me to be his girlfriend. Awww...how sentimental. Sub Zero really is pretty neat and it's educational, too!

After our wonderful date, we went grocery shopping because we had no food in our fridge. Well, okay. We had some moldy cheese, a half gallon of milk, and some hot dogs. Oh, and some ketchup and mustard and mayo and pickles and jam and soy sauce and butter. But that is really about it. We also tried to get a pumpkin so we can carve it tomorrow for FHE but, alas, all that was left were either gross or abnormally huge, so we're hoping to find a pumpkin somewhere else...
Posted by Nancy at 6:38 PM