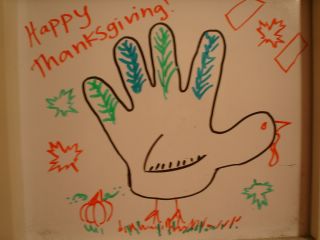 Thanksgiving just wouldn't be Thanksgiving without a hand-turkey, and a nice home-cooked meal. Unfortunately, Andrew and I were on campus until 4-ish and by the time we got home we were starving! We have this little habit of sleeping in and getting ready in twenty minutes, only remembering to grab a pack of fruit snacks or something equally un-filling. (See, mom, fruit snacks are useful!) This morning we had bagels because Andrew had been smart enough to take them out of the freezer yesterday. I suppose before I get into today I can tell about yesterday. I will provide minimal details because this is Thanksgiving and it's supposed to be a happy day.

Andrew's grandparents (Frank and Sharon) got set apart as missionaries yesterday. They are going to be humanitarian missionaries in charge of the Middle East and eastern Europe or something...they will be based in Germany (Heiss...Germany...Heiss...). They had previously served in Lebanon but that mission is closed now (I wonder why...) so they are glad that they will at least still be involved with Lebanon, even though they won't be living there.

Naturally, the whole family came to celebrate. We had a wonderful dinner after fasting all day. Dinner somehow tastes so much better when you've been going without all day--even if it is just a sandwich. We ate virtually everything there. And we did have a good visit with Grandpa Frank, Uncle Matt, and Aunt Nicki. Unfortunately, the family dynamics were quite interesting. Sarah and Emily were mad at each other. Emily and Jacob were mad at each other. Katherine was mad at the world. And a lot of people were upset with her. That, and Sarah was playing boss. So with so many "happy" attitudes going on we had a very interesting evening. But, we are glad that Grandma and Grandpa will be going on a mission. That will be such a blessing for them and for us.

******
So, now I can get on with today. Happy Thanksgiving to one and all! Andrew and I came home from school and ran into our first dilemma. We had forgotten to take meat out of the freezer, but we were both starving so we didn't want to wait for dinner. So, we made a lovely stove-top/microwave Thanksgiving dinner. 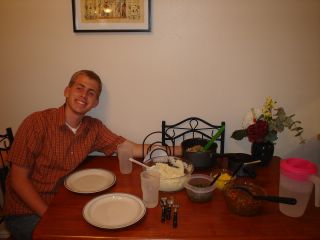 We had canned stew (because that has meat in it), instant gravy, stove-top dressing, potato pearls from the cannery, frozen corn and frozen string beans. It took us about fifteen minutes to make dinner and about ten to clean up. Thanksgiving has never been so easy. We still have tons of left-overs. I'm not sure how because we tried to not make too much. We should have invited the missionaries over...one of them is from Canada...

And, I have pumpkin cup cakes in the oven right now (because making a pie takes so much more time)! Boy, do they smell good. There's nothing to get you in the mood for fall like the smell of baking pumpkin, I'll tell you what!

For FHE (Family Home Evening), we did our lesson at the table. Andrew has so much homework that it's hard to get a good block of time set apart to give a nice sit-down lesson. So, what we did today (since he has two papers due on Wednesday) was your typical Thanksgiving traditional go-around-the-table-and-say-what-you're-thankful-for thing. It's kind of nice when there's only two of you because you don't have to sit dreading that people will say all of the things you're thankful for before it gets to you. Instead we just kind of called them out. We were thankful for a lot of the same things, too (go figure), like our house, our car, each other, temples, our jobs, our school, our families, and the fact that we don't live in a country like Congo. Wow, that would be hard. Our country is pretty good, really.

Boy, those pumpkin cupcake sure are smelling good. I'm thankful for pumpkin cup cakes, too.

Two last items to discuss before I quit this post. We got a new computer desk that I really like (I'm thankful for that, too)! It's a corner desk so it fits nicely into our dining room. My little brother got one at BigLots! (a glorified dollar store) and I really liked it when I saw his. Andrew and I went to BigLots! this weekend and the one we got was the last one they had in stock. It was pretty inexpensive so we just got it because we didn't know when we would find that good of a deal again.

I was getting so sick of sitting in the office. At work I'm in an office all alone all day...and then I was coming home and working away in the office all alone. Andrew was just in the next room, but I couldn't really talk to him or anything, so it was pretty boring. Now I'm right where the action is! Yippee! 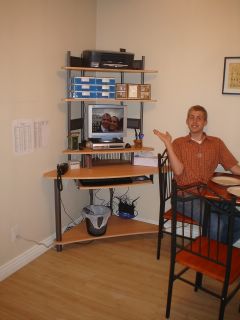 Lastly, I made two little baby hats this weekend. Andrew's cousin Nathan's wife, Sarah is having a baby (did you follow that?) so I thought that I would make her a hat. I'm planning on going to her baby shower this coming weekend and I was bored so I sat down and out popped this hat. I wasn't sure if she was having a boy or a girl so I made a hat in what I thought was a nice neutral color: yellow. I had three choices: peach, yellow, or green--all baby pastels. Really, peach would be too girly and green would be too boyish so yellow was my only choice.

Apparently I was wrong because Andrew was kind of disappointed in the hat when I was done. It was too girly, he thought. I'm pretty sure that David has a baby blanket that matches that hat, but whatever...so I started making one with a green base, just in case. We called Andrew's mom (she's in Arizona at Andrew's cousin Bethany's wedding this week) and asked if she knew what Sarah was having. Well, Sarah's having a boy. So, I finished the green hat last night. Andrew was happier with that outcome. I think that I would dress a newborn baby boy in either green or yellow, but since Andrew's the boy I suppose he's the expert. Who knew that yellow-shorts boy would be so concerned about fashion? 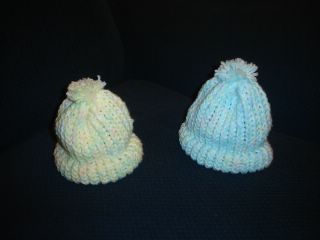