Andrew and I had lunch at his parents' house and then watched the last session of General Confernce with them. My friend Annik was there--I haven't seen her in forever, so it was nice to get to see her again! After we wore out our welcome there, we headed over to my parents' house to help out with the twins. Kelli was gone to pick up her boys, so Andrew and I did a lot of helping. We took the twins for a walk and that was really fun. Andrew even helped get them dressed. He's a lot more comfortable with them now that they're older!

After Kelli and her kids came back, we had dinner. I took some pictures of her kids. Matthew and (little) Andrew got haircuts this weekend. They look strapping...after they finished washing off all the dirt and chocolate from their faces (boys will be boys!) I took their pictures. 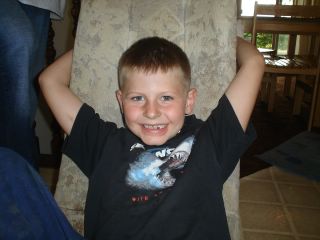 Rosie, Matthew and Andrew being silly 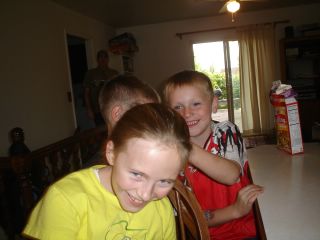 After dinner they headed out to the trampoline to show me their tricks. Don't worry... Although I did egg them on a bit, no one was seriously injured in the taking of these pictures (unlike last time)! They were flipping left and right and doing backdrops and bellyflops. I was sure there were going to be some minor injuries, but it all ended up happy. 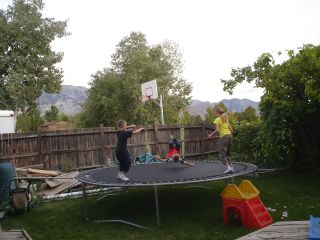 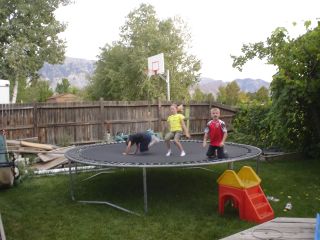 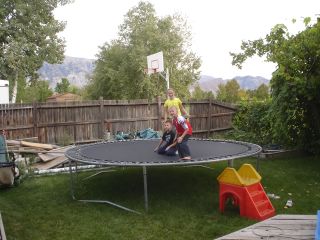 And, even though Sabrina wasn't feeling very well, I did get her to smile. She can now scoot herself backwards in the walker...she doesn't know that she's doing it yet. It kind of surprises her everytime she does it!

Me blowing on Sabrina's cheek 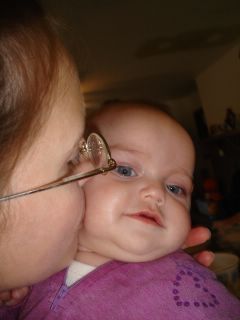 A Happy Sabrina at last! 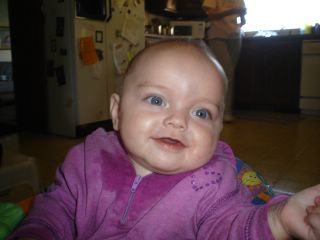 (look at all that drool!)
Olivia was very active and very happy the whole time. I had a difficult time getting a good picture of her though. She's developed an astounding interest in photography. Everytime I would pick up the camera, she would reach for it. Maybe it was a hint that she didn't want her picture taken anymore... 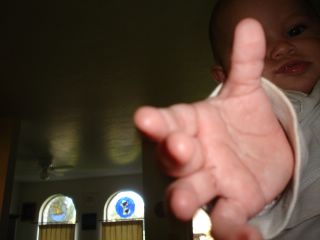