So, I'm at home working, and I get an Instant Message from my mom. It says, "I wish I could go home, but David is borrowing my car. Josie just called and said that she accidentally spray painted the cat. That raises a series of questions..."

I volunteered Andrew and me to go check on Josie (incognito, of course...after she got feeling better I asked if I could put pictures of Winter on the blog). This was a good thing because Andrew and I had to return a movie to his parent's house, send a fax, take some mail to my mom and take Josie to the Dusara's to get her movie back, so we could show up without many questions asked.

We walked into the house and shouted, "Hello?" I hear two muffled "hellos" coming back to me. One is Patrick from downstairs. The other is Josie. She's in the back room watching TV. I head in that direction. On the way, I see the not-too-happy looking cat, Winter. At first, she looks like she got in a bad fight, but then I remember that she just got in a tangle with a can of spray paint. 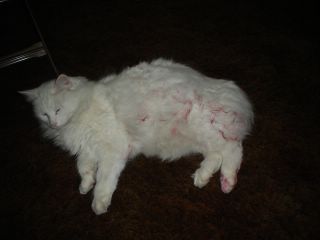 A close-up of her foot 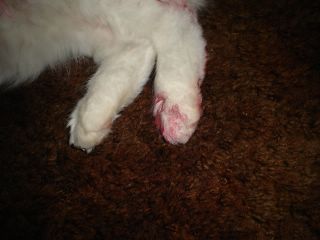 I continue on my way to the room Josie is sulking in. "What are you doing here?" she asks. "Just dropping some mail off for mom. Do you want to go to Sister Dusara's?" I answer. "Sure," she says, "Uhhh..." "Oh," I said, "What happened to the cat? She looks like she got the tar beaten out of her!"

She was pretty much recovered at this point and could give us a play by play. If we had arrived 5 minutes earlier she probably would have locked herself in the bathroom and cried.

For her TLC (Technology, Life and Careers or something like that) class, Josie had to build a rocket. She did a really good job, and was putting on the finishing touches in the garage: spray painting it fire-engine red. In this case, it was more of a rocket red. 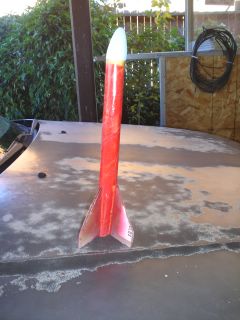 She went inside for some reason, just into the bathroom (probably to wash some paint off her hands or something). Anyway, when she came back out her rocket was gone! She looked around to see where the rocket would have run off to, and there it was, streaking across the yard...stuck to Winter, who was quite distraught about the whole thing. Josie ran over and caught the cat and put her in a brown paper bag.

Then, while holding the cat inside the brown paper bag, she went to telephone mom to tell her what happened. The first thing she said when mom answered the phone was, "You're going to be so mad at me..." That's the part that made mom worry...and why I volunteered to go check on Josie. Mom told her to put the cat outside so that the paint could dry without getting on anything in the house, but Josie was, with good reason, worried that someone would see the cat and think that something horrible had happened to her. Okay, getting red paint all over your beautiful white coat is pretty horrible, but she wasn't mortally wounded or anything. So, Josie kept her in the brown paper bag until she dried off.

Josie thinks Winter was trying to jump over the rocket, or rub up against the rocket or something, when it got stuck to her fur, causing her to become a little startled.

No real damage done (well, the rocket is a little bent, but I think that's fixable). With time, both Josie's and Winter's pride will heal. Winter will stop cowering under the kitchen table, and Josie will be able to tell this story. (She already laughed at it when I told Karen, with Josie's permission, of course).
Posted by Nancy at 7:10 PM