Provo Temple and Dinner at Marquita's

Andrew and I were going to go the Provo temple on Friday with his grandparents and his cousins before his grandparents leave on their mission, but his cousins (Brock, and Layla) couldn't make it, so we rescheduled. Instead, Mom, Josie and Marissa (one of my cousins) came over to watch Swadesh, a Bollywood film. We had an enjoyable evening. An enjoyable dry evening. We tried to invite Emily to come but she was playing in the marching band for the High School football team. Sarah is on the colorguard. I'm sure they both had an enjoyable evening getting soaked in the freezing, pouring rain. It was coming down in buckets!

I'd forgotten how crazy Josie and Marissa get when they are together. They are pretty much really crazy! And loud! We had to send them into the office a few times to let them calm down (which means be really noisy and crazy without disturbing us). Needless to say, it was an interesting evening with those two!

On Saturday morning, Andrew and I headed to the Provo Temple, by ourselves. When we left for Jordan they were still working on the temple grounds doing some new landscaping and installing some fountains. I must say that it is shockingly more beautiful now than it was before. They remodeled it because no one was getting married there. Instead, everyone was heading to Manti, Salt Lake, or Timpanogos (where Andrew and I got married). The day Andrew and I got married, 50 other couples were married in the Timpanogos temple! Even more get married each day in the Salt Lake temple. I think the church was hoping to share the wedding load a bit...and it seems to be working. I know of quite a few people who plan on getting married in the Provo temple.

Here's a before and after picture:

Before, with a lawn and flagpole in the front

This picture doesn't really do it justice because it's so dark (it was still pretty stormy yesterday morning) but you can still see some of the work that they've done.

After, with the fountains and flower beds 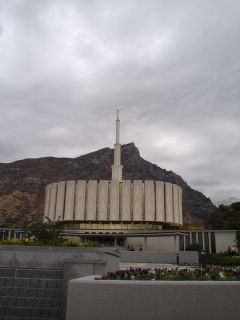 Us at the Provo temple 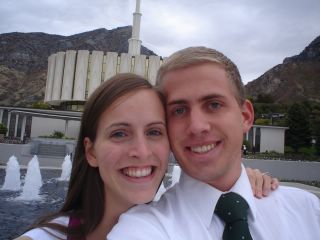 We did a lot of work organizing our house on Saturday afternoon. When we're finished, I might just post some pictures of it for everyone to see...but it's not finished and some areas are still rather unorganized and cluttered (the, ahem, office)!

On Saturday evening we went over to Marquita and Daniel's place for dinner. I forgot my camera which was really too bad. Marquita had prepared a wonderful, authentic Korean meal. She had a griddle on the center of the table and we fried our meat and vegetables right there. She also had a ton of little dishes full of sauces, vegetables, and spices to add to our meal. We ate with chopsticks (even Andrew)! It was so much fun! We played games and did a lot of catching up. We're planning on having them over for a Middle Eastern meal. Perhaps I'll remember the camera then.

It was amazing to see their baby, Maya. She is 17 months old now. The last time we saw her was in December! That's so long ago and she was just starting to get mobile. Now she's walking and talking. When we came to the door, we were carrying Cranium. Instead of saying hello, Maya put out her hands and demanded, "TOY!" It was pretty funny. She spent the whole evening trying to open the box and get into the game.
Posted by Nancy at 2:46 PM