I'm not sure how much our family will appreciate this post, but our friends who spent time in Jordan with us will! Hillary and Nate hosted an Arabic Reunion this evening and it was a ton of fun. The theme was "what you missed most while in Jordan" but a lot of people brought what they missed from Jordan. That was nice because that meant we had humus and kosheri and pita and falafel and shweirma! Yippee! 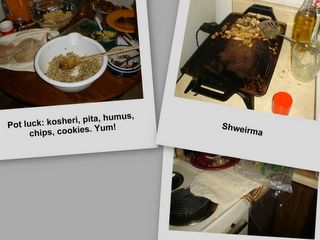 I took pictures of everyone while we were still just mingling and sharing stories about Jordan. We talked about bathrooms a lot, and how glad we are to have toilet paper now. We also talked a lot about different people and places that we missed.

Not very many of us came, it was mostly the couples: Nate and Hillary (of course), Ben and Ashley, Andrew (and me, but I'm not in the picture because I'm taking it), and Alia and Bryan are featured in the picture below: 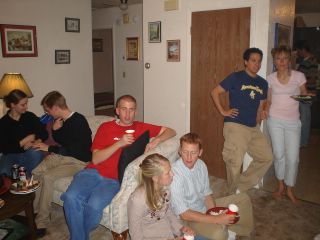 Here we have Matt and Brittany (who didn't go to Jordan with us, unfortunately. She's hilarious!). And then some of our single friends: Sami (aka Andrew), and Brian. 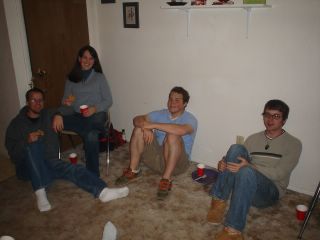 Shawn was hard to catch on film (er...on my digital disk thingy) because he kept heading back to the kitchen for more food. I'm not sure how many times he filled up his plate. I'm pretty sure he lost count. He was sure packing it in! I caught him in the kitchen though (getting more food, of course). 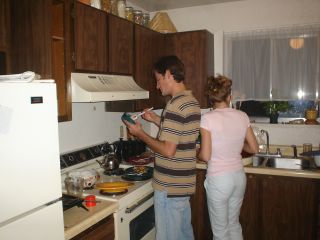 Alison was also there, but she left after just a few minutes.

It was so much fun to see everyone! When our chatter finally started dying down, we pulled out a rather old version of Trivial Pursuit to see if we could answer any of the questions. I took a video of it because this is so typical of us while we were in Jordan. We once got together at the Steeds while Bridget and Jeremy were living there and played Star Wars Trivial Pursuit.

Our conversations just kept getting weirder and weirder. Then Nate broke out the chain mail. This stemmed from one of the questions asked during our game: What chain did Ray Croc establish?

This question seemed to stump us all. After someone finally shouted out "McDonald's" we all started saying what we were thinking: chain link fence, ball and chain...chain mail.

At that, Nate got up and left the room. He came back with some chain mail and threw it on the floor. The guys in the room, of course, scrambled for it. So, Hillary told us this great story about how she found out that Nate was into chain mail. She had mentioned something about wire while in Jordan, and he answered her and expanded on her knowledge of chain mail more than she thought anyone should ever be able to. Come to find out, during his sophomore year, he had made a whole suit of armor. So, we had to make fun of that a little bit. Brian was getting really into it. He's so hilarious and was one of our main sources of entertainment while in Jordan. We'd beg him to tell stories at every get together.

So, this video is us teasing Nate...and then somehow we get into Hillary's first attempt at making falafel. She thought oil had to boil before you put in anything to fry it. She ended up getting a visit from the fire department. Actually, that was one of two times that semester. It's not really my story but I'll give you the just of it. She had wanted to make cinnamon rolls to impress a boy who was coming to study at her apartment early in the morning. So, she was up at 3 AM making dough. She thought that she'd just put it in the oven to rise and have a short nap. So, she put the bowl with the dough in the oven and covered it with a towel and thought that she had turned it to low, but actually put it on high...and then she went to sleep. Anyway, that was the second story, but the camera ran out of room before she got to that point.

Ahhh...nice memories of Amman are flooding back to me, but since I've already written well over 200 pages about that, I think that this will suffice for now.
Posted by Nancy at 12:42 AM

Email ThisBlogThis!Share to TwitterShare to FacebookShare to Pinterest
Labels: Jordan