Andrew had to work late again last night which meant that I was home alone. I got a bit of work done, but being home alone is really pretty boring. Before I went to bed though, I drew Andrew a picture. 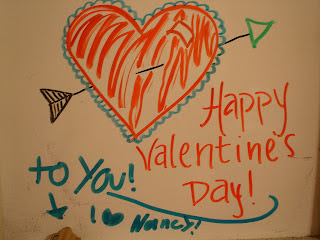 Luckily he's not a girl so he doesn't care.

When I walked into the kitchen this morning, there were flowers waiting for me, but not those silly kind that are all cut up--real flowers in dirt. 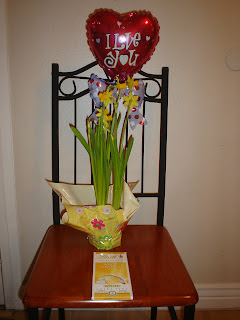 They're daffodils--the same flowers that I got last year for Easter that are currently in my fridge pretending that it is winter so that perhaps they will grow. I think they're really pretty. Andrew picked them up on his way home from work. Considering he got off work at midnight, I'd say he was pretty thoughtful. 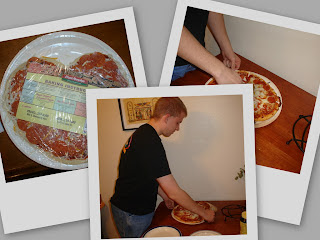 This year the pizza worked out a lot better, but that's because we realized that they just made a round blob of dough and then cut out the heart instead of trying to shape the heart out of a blob of dough. No matter what you think as a child, pizza dough is just not as easy to work with as play dough. I used to make very creative foods out of play dough. Real dough is just a bit tougher. Those play dough spaghetti makers, a cinch to operate. A real spaghetti maker, not so simple.

Now that we know Papa Murphy's secret, perhaps we'll be able to make a pizza from scratch next year...

After dinner, I decorated cupcakes while Andrew did homework. The cupcakes really did turn out alright in the end. 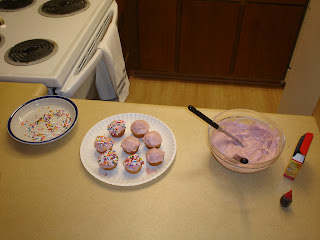 I had to phone mom to get the recipe for the icing. See, I know the general idea of making icing, but I'm just not very good at making it off the top of my head. I tend to end up frosting only half a cake, or I won't get the ratio of liquids to solids right and end up using 2 bags of powdered sugar and a 1/2 jug of milk and have a year's supply of icing.

There is a particular recipe of icing that I like to follow--it's the Betty Crocker one. I have a CD, but that recipe wasn't on it, so I phoned home to get it.

Josie answered. I was very specific with what I wanted, "Can you get me the recipe for icing from the Betty Crocker Cook Book--that's the big red binder up with the other cook books that says, "Betty Crocker" on it."

An unheard conversation about what I want takes place.

"Mom has that recipe memorized. She'll just tell it to you."

That would be fine, except that I know that mom has the recipe memorized how I memorize recipes (and scriptures). I know exactly what ingredients went in to the recipe and I know how the recipe turns out (so I can quote scriptures), but I have no clue what amount of what went in (and I have trouble remembering references).

Mom comes on the phone, "When I make icing, I just use some butter and mix in some powdered sugar and a little bit of milk, and some vanilla flavoring."

"I know, mom," I reply, "But I make icing like grandpa makes grits. What I want is just the recipe from the Betty Crocker Cook Book."

"Oh," mom says and immediately asks Josie to get the cook book (so she probably should have just done that in the first place).

Let's just say that grandpa's not a southern boy.

My grandma is from Florida and therefore she makes delicious southern food. Grandpa is from Utah, which I used to think was pretty far south, but my perception has changed a bit now that I've moved here myself--it's really not the south, believe me there is a lot more south to go from here.

Well, when they were a young married couple, grandma was either sick or grandpa was making her breakfast in bed or she'd just had a baby. I don't remember how the story goes. Anyway, grandpa decided that he'd make her grits, so he put some water on the stove, brought it to a boil and then added grits like he had seen grandma do so many times before.

This he continued until he used every pot and all the grits in the house, or so the story goes.

And that is why I absolutely need recipes for some things--it would be completely disastrous otherwise. I do like to experiment in the kitchen but some things have already been worked out perfectly so no more experimentation needs to be done.

Plus, this icing actually tastes like the stuff that you buy in the stores in the plastic containers, which I happen to find delicious.
Posted by Nancy at 11:18 PM