I realize that that is the "saying" for March. I like to think of the end of February as March because March is closer to spring. Plus, it's been so nice lately, I've been wearing sandals so it's kind of hard for me to believe that it's still winter.

In my mind it is already spring, so when all that good stuff is taken away from me, I feel a little confused. When I woke up this morning, it was nice and bright outside, so I opened the curtains: 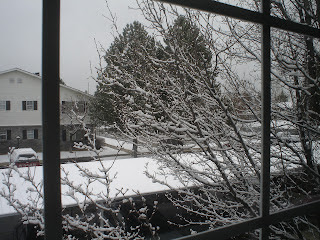 Not exactly what I wanted to see, but I suppose it will have to do for today...as long as it is gone soon. Snow simply isn't very welcome in my life. I mean, we live by the mountains. Why doesn't it stay up there? I don't care if the mountains are cold and snowy.

Anyway, our confusion about months doesn't end there. For some reason, Andrew and I were talking about the "sayings" for months. We had just finished March and were moving on to April and May (which have to share a saying). Andrew said, "April flowers bring May...wait a minute. What do April flowers bring in May?"

I think he's also hoping for an early spring. I had to dash his dreams by clarifying that April showers bring May flowers. Bummer deal, I know...

Some places in the world have flowers all year long and, oh, how I long to live in a place like that!
Posted by Nancy at 12:39 PM