The bookstore was giving away free basketball tickets if you spent $10. I got 2 tickets with BYU money (sweet deal! I had to buy some things for work), and then 1 more when I got the Valentine's gift for Andrew/Birthday present for Karen. I knew what we could do with 2 tickets (go together), but what would we do with 3?

We went through our options:
-Inviting a couple in our ward (we only have 3 tickets, not 4)
-Inviting (a) parent(s) (again, we only had 3 tickets and inviting only one parent would have been a little odd)
-Josie (into Bollywood, not basketball)
-Emily (she's in pep band in high school, but only to flirt with boys)
-Sarah (I think she's going to be too cool to really hang out with us until I'm visibly pregnant)
-Jacob (available...but we still have other options)
-Patrick (too involved with volleyball. The game started at 8:00 and he gets up at 4 am)
-David (if we were taking him to a basketball game, we'd at least want it to be a double date)
-Throw it away (hello! it's a free ticket! no way!)

So, Jacob won...we invited Jacob to come along. He gladly accepted.

We headed to the game. Jacob wasn't in such a great mood to join us that evening. He wanted $5 to take with him to Idaho. I told him that if he came over and did the dishes everyday for a year that I would give him $5. He changed his mood toward us and settled on just being upset at his "parental units." I'm so glad we'll have 15 years before our child is 15...

Jacob's first attempt at a smile 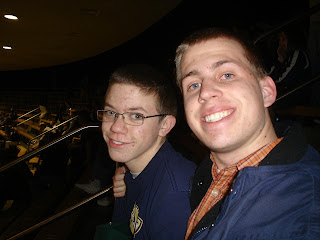 BYU started the game off right and scored a few baskets as a crowd-starter. That got Jacob excited. 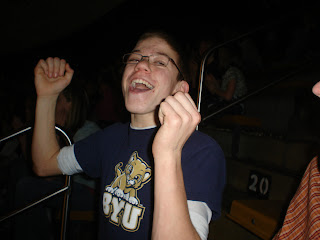 And the game pretty much just went on from there. I was really glad that it wasn't a football game. Those are so long! I mean, basketball periods are only 20 minutes. I can totally sit through, and pretend to be excited for, 20 minutes. The most exciting moment of the game for me, though, was when the silly kids on a date behind us decided to get up and get snack food.

One of the girls was pretending to hiccup. And it was really getting on my nerves. She would get all into a conversation and decide not to hiccup anymore but the minute the conversation was over, "Hic...hic...hic...hic...hic..." while her date crooned, "Oh, you hiccup so cutely." I almost turned around and said, "Don't encourage her!" or "Oh, Sweetie, do you need some help getting a drink for those?" or simply yelling, "Boo!"

I also had to endure a conversation about lip smacker:

Boy: Oh, you use lip smackers?!?
Girl: Yeah, why?
Boy: I love the taste of lip smackers. Ever since junior high, I just have loved lip smackers.
Girl: Really?
Boy: Yeah, what kind is that?
Girl: Gives him the chap stick, when all he really wanted to do was pull some moves.
Boy: That's one of my favorite kinds.

Awwwww...how cute. Too bad he's only 18 and will be going on a mission soon. Yuck.

Believe me, I tried to ignore them the best I could...but it was all so pathetic...

Right before the half-time show, Jacob got up to get a drink. He was gone for not even a minute. He gets back and I was like, "That was fast. Did you even get that drink?" Jacob said, "Oh, I got bored and stopped looking." Ri-ight...later he asked Andrew what I said and clarified that he really did get a drink.
Us during half-time
(one of the better self portraits of about 10) 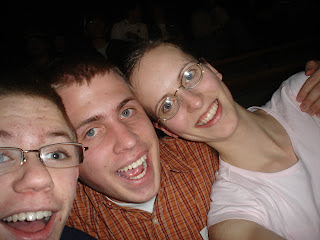 All in all it was a pretty fun hour and a half. Our team stayed ahead the whole time, but not so ahead that it was boring...it was just right.

Here's some of the action (if you can see it--I told you: the tickets were free): 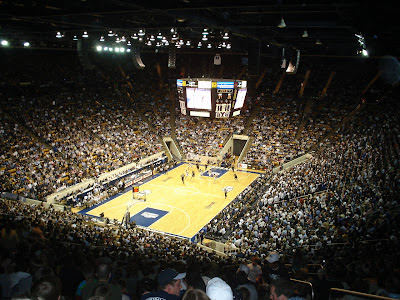 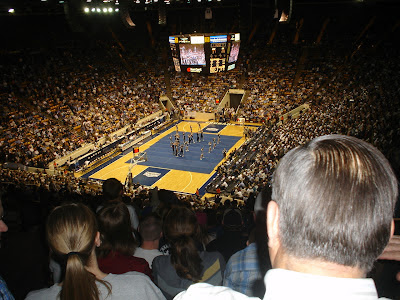 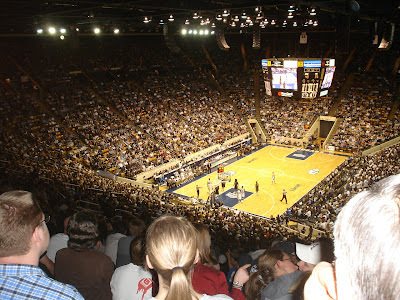 With four minutes and thirty-five seconds left in the game, the we got up and walked out of the Marriott center. It took us less than two minutes to speed-walk to our car and beat all the traffic off campus. We already knew our team would win...and so it wasn't a surprise when Andrew turned on the radio and it announced that BYU won 76-67.
So, we all had a great time together, bonded, and earned bragging rights. Jacob even warmed up and forgot to mention us giving him $5 when we dropped him off at home (we didn't give him $5...ha, ha).

Jacob, not in a bad mood anymore 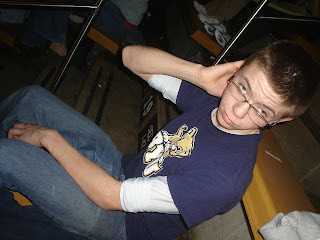