The money system here is rather curious. They have 9 different bills and even fewer coins. I'm actually not sure how many different coins they have because the Wikipedia article on them is rather elusive. All I know is that we, personally, have 3 different coins--a 5 qirsh, a 50 qirsh, and a 25 qirsh. We only have one of each and we don't plan on spending them because they're such a novelty.

Plenty of 1 pound coins have passed through our hands. We see those with more frequency than the other coins so they aren't quite as cool when they come around.

Instead of coins here, they use bills. They have a 1 pound bill, a 50 qirsh bill, and a 25 qirsh bill. Believe me, those qirsh bills are the rattiest looking things! I think that's why coins are supposed to be coins--because they get used more often than anything else.

The funny thing is, that with the exchange rate, 25 qirsh is equal to 0.04 dollars and yet we use them all the time. All the time. But never the coins. We've kept most of the coins we've found (all 3 of them) because they are so rare we'd hate to spend them.

A lot of stores don't give out change, which is something I don't understand because I usually pay with exact change, as do most people here, so the one day I happen to need to break a 100 you'd think they'd have change. Not so. They have to scrounge around looking for change. Always.

The metro costs 1 pound. Everyone pays with either a 1 pound note or a 1 pound coin. Thousands of people use the metro everyday. Maybe even millions. I don't know. All I know is that if you try to pay for a metro ticket using a 10 pound note you'll ruin the ticket seller's day.

You can look through the window into his booth and see 1 pound notes piled up everywhere, but he will hem and haw and take several minutes counting out your change, like you somehow inconvieninced him. It's not hard to count to nine, Mr. Ticket Man.

Once, Karen, Rachel, and I went to KFC for lunch downtown while we were sightseeing. Karen paid for lunch and it took them a full hour to come up with her 16 LE in change. When they finally gave it to her it was all in 1 pound bills when it would have been much more logical to give her a one, a five, and a ten. So maybe that's why establishments that should have change never seem to have any. They give all their change to only one lucky person per day. The rest of the population just has to suffer.

We've been here for about 3 months now and we've seen a lot of money come and go in that time. I don't think I've ever seen such a large amount of cashflow--of course, I'm used to the "cashless" society of North America so any cashflow seems like a lot. However, in all our time here, in all the many bills we've seen and handled, we've never seen a 200 pound bill.

I went in to the CSA to get the refund from my Egyptian cooking class that I never went to. I had signed up to attend the class with Sara in September. She said Kevan would watch Sam and Rachel for us while we went. But then the instructor broke her back and the class was postponed and Kevan ended up in Saudi Arabia so...long story short, I finally went to get my refund today.

And it came in the form of a 200 pound bill (among other, smaller, denominations). 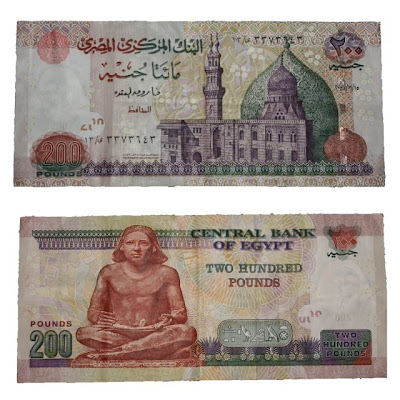 I was so excited! I felt so rich...but I'm not exactly sure why since 200 LE is less than $40. Still, I felt rich. Perhaps I felt rich in experience because I handled the bill before Andrew did! Neener, neener, neener! ...Not that it was a competition or anything. 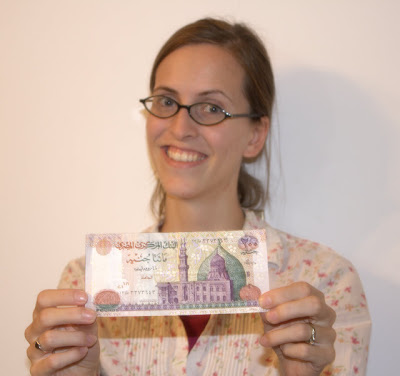 He was pretty excited about when I showed it to him, too! 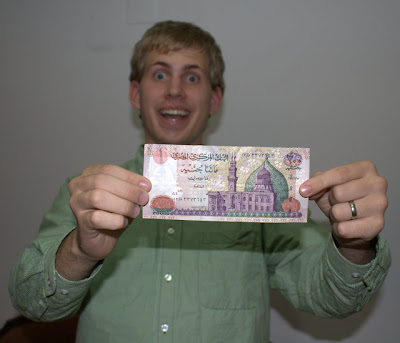 We considered just holding on to it for a while, but then we remembered that we live on a grad student budget, and while 200 LE isn't a whole lot of money, it is money. I wonder how we're going to break this 200.

I kind of want to do it at the metro station just to stick it to Mr. Ticket Man. I can almost see his face when I hand him a crisp 200 pound note and ask for 1 ticket. If I succeeded in convincing him to give me 199 one-pound notes, I'd never need to scrounge around for taxi change again!
Posted by Nancy at 1:23 PM