I love this girl.

Rachel's been rather headstrong her whole life. I started fighting with her when she was still in the womb. She'd kick me and I'd poke her back and then she'd kick a bit harder and then I'd poke and prod until whatever limb it was sticking out would go back into place. My own impertinence was always a mistake because whenever I started to think that I'd won the battle, Rachel would, I swear, lock her knee caps or something and there'd be no way for me to push her back to where I wanted her. So I'd just have to hold my breath (sometimes literally) until she decided to let me be comfortable again.

She's still just as headstrong and we still get in fights about it at least once a day. I've given up on making her wear normal clothes unless we are going out because it just isn't worth the headache. Sundays are always traumatic. If we're late for church and Rachel looks like she's been crying it's because she had to try on every dress in her closet before we could go.

Here she is in some of her self-proposed outfits: a 3T t-shirt with my Sunday shoes, and a bathing suit with froggy slippers. 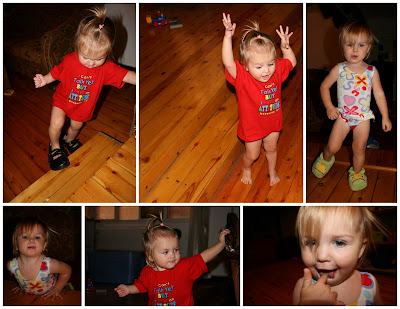 She's cute in anything she wears and I'd rather have her be happy wearing what she wants to wear than miserable and wearing what I want her to wear. This will probably change when she starts school. I wouldn't want her to get teased for going to school with no pants on or anything like that.

And here she is goofing around in the bathroom. I think she likes the bathroom/kitchen area of the house simply because I don't. She's always running off to do something she's not supposed to, but she sure is cute while she does it.

Today I saw her run off with I Like It When and then I heard her potty scraping along the bathroom floor. I ran to see what she was doing. I think she had been planing on taking herself potty (for the third time today) but the light was off and it was too dark so she decided to relocate to the hallway.

She had picked up the potty by the horn in the front and was sloshing pee all over the floor! I am certainly planning on leaving the bathroom light on, so that she can take herself without having to move her potty, and will be checking her potty more often, so that I can empty her potty of the pees she's done without my knowledge. 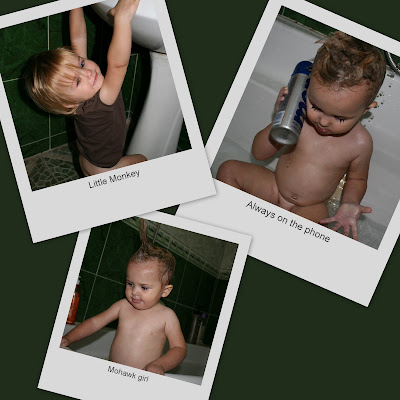 That picture of her holding the shaving cream can up to her ear? That's her phone. One of my favorite things about Rachel is that you can say, "It's for you!" and she'll put whatever it is she's holding up to her ear to "talk on the phone." I think it's adorable.

She also loves to swing on the bathroom sink. Or the oven door. Or the kitchen table. Or the back of the chairs. She uses anything she can as monkey bars. She's always climbing, climbing, climbing. It's driving me nuts! She climbed on the table after dinner and grabbed a knife that I hadn't cleared yet. Eek! And I thought we were finished baby proofing. Perhaps baby proofing is just a constant battle.

Last night we proofed our baby against mosquitoes. The poor dear woke up yesterday morning with several mosquito bites on her arms, face, back, and legs. The mosquitoes here are awful--they hunt around and attack you all at once. You're fine one moment and than *bam* you have like 4 mosquito bites on one arm!

Rachel's bites swell up a lot, like Andrew's do, and she's always scratching at them. We decided that it was better to prepare and prevent so we finally rigged up a mosquito net for her. It took us quite a while to do it since nothing we tried worked. We even borrowed the Lewis' drill (and cement bit) but we couldn't get into our walls or our ceiling with that. We ended up putting screw in Rachel's headboard and attaching the other end of the net to a broom pole that we duct-taped to the side of her bed, and a thing that was sticking out of the wall.

It worked alright. She thought it was pretty cool to be sleeping in a fort and stayed in it the whole night long. She woke up without a bite. 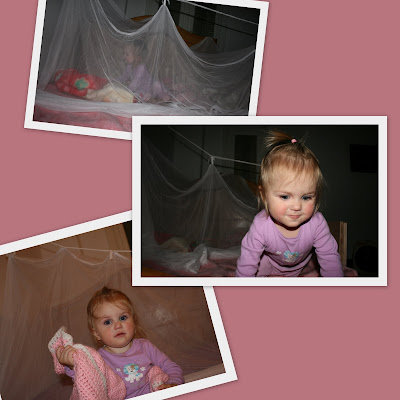 Today we fixed it up a bit so it's a little more sturdy and a little less sloppy than it was before.

"There weren't any mosquitoes in Jordan..." Andrew started, looking at me like I was crazy.

"Yes, there were," I asserted.

"So you don't remember sleeping with our heads under the sheets to ward them off, or how you and Ezra would wake up looking like you had the chicken pox?"

Now we're all safe from mosquitoes and Rachel loves sleeping in her little tent. I should have put it up sooner...she's been going to bed so nicely!
Posted by Nancy at 1:54 PM