Flashback Friday: My time as a chemotherapy patient

Because of my insane schedule at AUC this semester I haven't had time to wander around Ma'adi to find a barber. My hair kept getting longer and longer until it was crazy long and unmanageable. I refused to comb it or put gel in it, probably as a form of subconscious protest against its length. In the states when I refused to do anything to my hair Nancy would eventually give in and cut it short with our cheap Walmart clippers. We didn't have clippers here so my protests went unanswered. 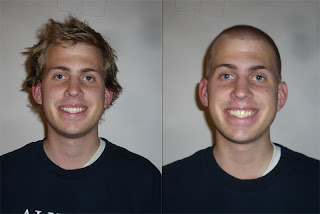 Before...After
We finally caved in and bought some clippers from Moudy's, the same store where Nancy bought UNO and where we buy toys, dishes, laundry detergent, candles, ribbon, super glue, clocks, and telephones. They have everything in that store! The clippers only cost LE 45; since a typical barber visit costs LE 15-20 here in Ma'adi, our investment will be remunerated soon. 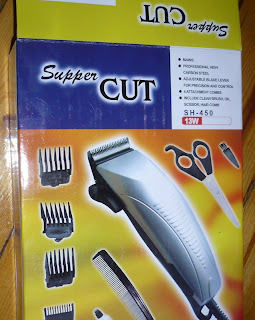 Supper Cut
Armed with our new "Supper Cut" clippers, Nancy finally cut my hair. It took a while to get through the thick mangy hair but she finally got it all down to 1/4th of an inch on top, 1/8 on the sides and back--nice and short.

However, she missed one spot on the front, which I pointed out as she was cleaning the clippers. Nancy quickly fixed the one spot and then ran the clippers to the back of my head for good measure, only realizing after that she had the 1/8th attachment on. I effectively had a trench running down the middle of my head. We had to cut the rest of my hair down to 1/8th, which is surprisingly short.

Coincidentally Tanner, who goes to AUC with me, had his hair cut at a barber yesterday and ended up with an all around buzz. People at church got a kick out of our matching haircuts. Josh got such a kick that he actually convinced Carolee to let him do it to. They spent the evening at our apartment today and borrowed our Supper Cuts. Josh's mom almost died in horror when they e-mailed her the pictures. 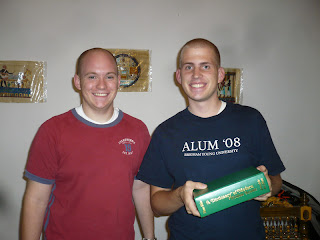 Matching hair
Currently every male Mormon that attends classes at AUC has buzzed hair (I think Abe does at least). We just need to get Patrick on board next...

Fortunately it wasn't that shocking of a change for me since I've had this same haircut for as long as I can remember, which brings us to this week's flashback (time for me to jump onto the Flashback Friday bandwagon...)

In 1985 my dad was accepted to graduate program in history at the University of North Carolina (UNC) in Chapel Hill. He moved our entire family (consisting of my mom and me, aged 9 months) out to the green land of Raleigh/Durham. After a semester or so (details fuzzy here), he decided that he had had enough grad school (some days here I totally understand why). He found a job at the IT department at the Duke University medical school and worked with their fragile network for 8 years until we moved to Utah in 1993.

We would often go meet him at his office/department at the hospital when we was done working. I still remember his dark office full of ancient coaxial cables, with a forboding sign depicting a skeleton declaring "Abandon hope all ye who enter." My 4-7 year old mind couldn't catch the literary significance of that Dantesque phrase, which he still has in his office today.

When I was around 5 or 6 (fuzzy details again...) my mom decided to try her hand at cutting my hair. She apparently had a miserable experience and ended up buzzing it all off extremely short in fierce frustration. All my blond hair, which already did little to cover my scalp, was gone, leaving me virtually bald with a layer of 1/16th of an inch long hair poking up.

Shortly after that haircut we went to visit my dad at work. Nurses and doctors swarmed us, showering me with lollipops, candy, and deeply compassionate sympathetic looks. They would urge my parents to "keep fighting it" and whisper hushed words of concern for me and my progress.

Apparently Duke was renowned for its pediatric cancer unit. I had become another suffering chemotherapy patient at the hospital because of my haircut.

Since then I've pretty much always had buzzed hair. I actually had to grow it out for my mission since it had to be partable (although I was often tempted to ask the barber to just cut a part line into my hair, saving me the hassle). I hate long hair; short hair makes life so much easier. One less thing to worry about.

And thanks to our Supper Cut clippers I can keep that tradition going out here in Egypt, although I don't think I'll be getting any sympathy candy from people on campus on Sunday. Rats.
Posted by Andrew at 3:30 PM