Somehow I thought it'd take longer than a half hour for Templeton to work out a scheme. Unfortunately it only look him about 28 minutes. It helped, I suppose, that he didn't work out every part of his plan. Instead he kind of winged it.

I think his plan can be summarized thusly: Get around the glue. Somehow.

And get around the glue he did!

First he tried climbing up our screen but soon realized that this was fruitless since once he was up the screen there was no where to go. But seeing him stretched out and dangling helplessly in midair made him seem tall and skinny and quite a bit smaller than he seemed before. Still, a rat is a rat and I was hoping that he'd fall to his death. 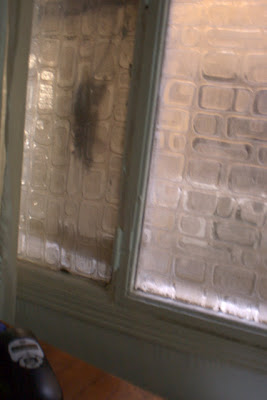 Instead he just walked around the board using the very edge of the windowsill and part of the wall.

Perhaps we'll be able to lure him into a sense of false security--we'll just leave the board out there for a while and see if he begins to think it's benign. Or maybe we'll put some peanut butter out to tempt him instead of the haram bacon grease. Our problem might just be that he is a Muslim rat and won't eat anything that's not halal.

If we don't trap him soon we might just get some rat poison. Our friend Abe also had a rat (who would frequent the interior of his apartment, so we're lucky because ours doesn't) and he poisoned him. I asked about the stench, but Abe said that this particular poison completely dehydrates the rat so there wasn't any smell postmortem. Of course, Abe is a bachelor so it's possible that he simply didn't notice the smell...
Posted by Nancy at 1:29 AM