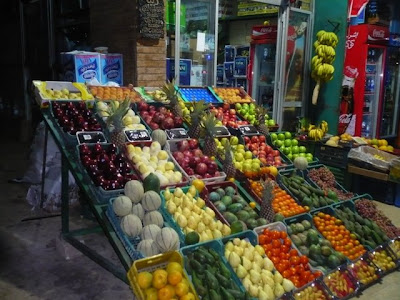 There are a variety of fruit stands in our neighbourhood, several of which are on Road 9. Before the Masons got here we'd been going to a fruit stand that was nice enough, but we weren't entirely pleased with the "customer service."

Melissa asked if we'd been to "The Tree." She described your typical fruit stand, mentioning specifically that there was a tree, too. Since Road 9 is lined with trees, as most streets in Maadi are, I wasn't sure what she was talking about or why her fruit stand was peculiar.

I was still clueless when we'd finished breakfast--the Masons were kind enough to take us and the Sharps out to breakfast when they returned to Cairo as welcoming gesture--Melissa invited us to follow her there. And thus we became faithful customers of The Tree, so called because of the tree growing from the inside of the building right out of the roof. 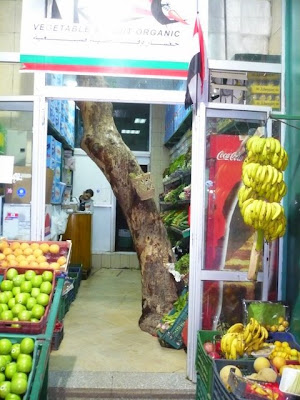 We are friends with a few of the workers there, Hani in particular, who is always sure to give Rachel a banana (or two). Most often the workers are quite charming, will select the best fruit for you and charge you a fair price.

"When are you going to eat this?" they will ask. And then you'll say when, whether it be that night or in three days, etc. Usually they pick very well.

They package everything up nicely and deliver straight to your door. Everywhere delivers, which is nice because we don't have a car. Or a bike equipped with cartons to haul groceries. Or a bike at all. We only have the stroller and we can only fit so much in there.

Rachel and I went to the tree together last week and Hani wasn't there, but there were some other nice workers there, which I was glad about because sometimes when Hani's not there things go less smoothly. These workers were all falling head over feet for Rachel. They gave her two bananas, some French fries, and even a sip of pop.

When it was time to go Rachel ran away from me and jumped in the arms of her new friend, whose lunch she had just helped eat.

"Alright, see you later, Rachel," I said, playing along, "Just deliver her in a half hour with everything else."

He and Rachel waved and giggled. Rachel only realized she'd taken her joke too far when I started walking away. Then she decided that she wanted to come home with me afterall. 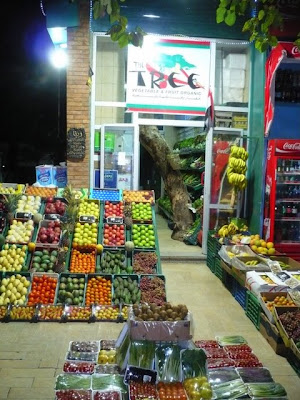 She loves going shopping because she usually ends up with some sort of goodie from the bread store, and a banana from The Tree, and sometimes even a chocolate from the confectioner's. Everyone seems to keep a lookout for her.

She keeps a lookout as well and always gets excited when we get close to The Tree, or any other of her stomping grounds.
Posted by Nancy at 2:27 PM