Playgroup is still going strong--we're out at the Maadi House nearly every Wednesday playing at the playground, swimming, and occasionally eating lunch at the fabulous American style diner that serves real bacon.

Rachel peed her pants today within the first five minutes at the playground. She often pees her pants when she gets too involved with playing. The rubber pants contained everything nicely and so I just switched her undies for some dry ones, put her pants on, and sent her back to play.

When it was time to go swimming she ran right to the pool and started trying to climb over the fence. She just loves swimming and was so excited to have friends with her this time! (The last few playgroups have been rather dull...and unoccupied). She was so brave and kept showing off for Finn and Abby. She was kicking her legs, splashing her arms, blowing bubbles, throwing her ball. She was a swimming machine--she even let go of me to flounder her way to the wall and back again a few times! She loves bobbing at the wall; she won't go all the way under, but she'll put her mouth and nose in and blow bubbles.

Melissa, Finn, Rachel, Abby and Lora
Finn and Rachel were so good at sharing the ball I brought for Rachel, although next time I think I'll have to bring two balls because sharing is so, so hard at this age! They were very nice about giving each other turns but pouted and whined until it was their turn with the ball again. When either Melissa or I would ask one of them to give the ball to the other, they'd both raise the ball up above their head as if to throw it, but would never let go. The sharing was a little forced, so two balls would be nice. Then they can practice "trading" toys instead of actually sharing. 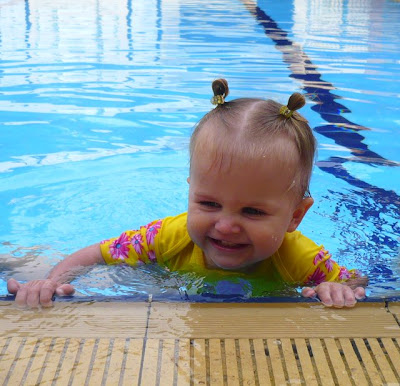 Even though it was like 27°C (about 80°F) outside, which is plenty warm, and the pool is heated, there was a breeze blowing and we were getting pretty cold! We got out to cuddle in our towels that we left sitting out in the sun. This is one of Rachel's favorite parts of swimming! 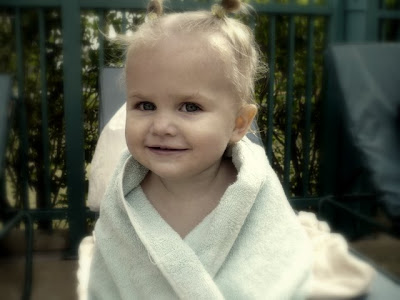 She likes to snuggle up with her towel wrapped around her and then climb up into my lap and share my towel, too. I usually get her dressed out in the sunshine where it's nice and warm--she doesn't like staying still in the locker room, anyway.

When I had finished getting her dressed, Melissa asked if we'd watch Finn while she changed. I picked Finn up because he was about to take a dive off of the chair he was sitting on and Rachel stretched out her arms--not because she was jealous, but because she wanted to hold him. So I plopped Finn into her lap and she gave him a great, big hug. She loves babies! When we were all warm and dry, we got a table for lunch. Rachel had to go potty, so we left to use the restroom. However, once we were there she threw a huge fit and refused to sit on the potty. So we left and went to sit down for lunch again. The minute I sat down Rachel looked at me and signed potty urgently. I took her up, groaning a little because we'd just gone, and headed back to the bathroom.

Unfortunately for Rachel, she couldn't hold it anymore. She peed on me. I was so mad!

We didn't have any clean underwear because of accident #1 and this time she soaked through her pants as well so I ended up putting her in a sun suit, commando style. I then told her that I had been planning on getting her a yummy lunch but instead we'd have to go home hungry and it was all her fault. It didn't really seem to register with her.

Sometimes it makes me madder that she doesn't get upset when I wish she'd just show some remorse. And then I have to remind myself that she's only 16 months old.

So even though we went home angry and covered in pee and had to eat a boring, old PB and J for lunch, we had a pretty fun day. I wonder how much longer we'll be able to swim outdoors...
Posted by Nancy at 12:34 PM