Lions and tigers and pears

Living here makes the linguist inside me smile. If I was given a pound for every translation error I spotted, I'd be rich. Perhaps I should start charging...

During breakfast the other day Andrew noticed an error on a box of Temmy's Rice Crips. (He could be rich, too, and then we'd be doubly rich!)

We're loyal Temmy's fans--we choke down their brand almost every morning for breakfast.

On the back of the Rice Crips box there were a bunch of games and an advertisement for Honey Pops. Their cereal isn't great so they have to use gimmicks to get people to keep buying. It also helps that they are the cheapest brand. That's why we keep buying...not because of the Mother's Day CD that I got as a prize last week.

Anyway, we've had the Honey Pops before, and they're actually pretty good, but this ad made me want to go out and buy another box ASAP. Who can resist that lovable pear? 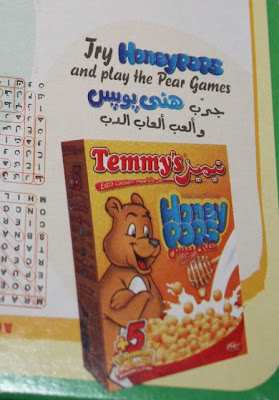 On the side panel of any Temmy's box you will see the serving instructions informing you that it's alright to eat this cereal in both summer's and winter's. The instructions are the same on every kind of cereal, except that the name of whatever cereal you're eating is inserted (in parentheses, of course).

People here still have to be reminded that it's cold cereal so the idea is that you eat it with cold milk. I like that they suggest adding sugar to your preference. So do I, so do I. Especially if you get the bran flakes. The bran flakes are terrible and taste just like eating cardboard, so I prefer a lot of sugar. (As a side note, don't get the bran flakes...or the bran o's. Get the bran stars. They still look like dog kebble, but they taste way better!)

I also find it interesting that whoever wrote (or translated) this little gem pours their milk and then adds cereal. I personally pour my cereal and then add milk. But maybe I'm not normal. What do you do? 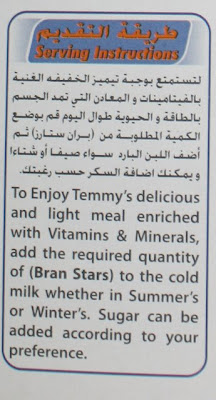 At least Temmy's is made locally, as virtually everything in Egypt is--I swear they import nothing--so that we won't have to face another cereal shortage if war between Isreal and Lebanon flares up again. That really put a cramp in our breakfast habits those last few weeks in Jordan.

Leaving our cereal cupboard we move on to the saran wrap. We buy Firest because it's pretty much the cheapest stuff available. (Yes, that's my garbage can overflowing in the background, and yes, I emptied it after I looked at this picture and noticed that it was overflowing. Thank you for asking.) 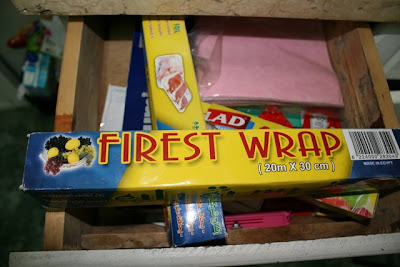 We haven't been able to figure out if they mean to say "First Wrap" or not. From the Arabic it looks like they were probably going for "First Wrap," but with the invisible vowels, it's hard to tell.

The great part is that on the side of the box it lists some uses for the wrap: 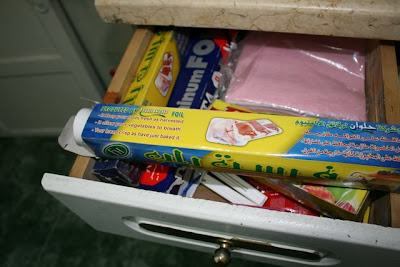 So now you know, it's Firest that you want. I want anything that allaw my veggies to breath!

Those "Glad bags" you saw in the first picture--totally boring. "Glad bags" was the only English on the box. The rest is in Chinese, which, unfortunately, I can't read.

But it makes for a nice segue to our next item: the package for the gas match we recently purchased. A picture wouldn't do this justice, so I'll just transcribe it for you.

"Description: Gas match is the best disposable butane torch lighter. This multipurpose lighter is ideal for these difficulty to reach in-door. Outdoor. Lighting tasks. And most important. This torch lighter allows you to keep your face and hands away from flames. It S so convenient that you will never use match again.

Caution: Do not puncture. Incinerate or expose to high temperature from sun or otherwise above 120F

As with all lighters hold away from face while igniting be sure flamw is extinguished after each use exercise care when lighting any object and do not use gas match to light cigarettes, cigars and pipes. Pailure to follow instructions may result in burn injuries.

Keep and store in cool and safe places out of children's reach."

What can I say? I love that they use so many out of place periods in the top half and almost no periods in the bottom half. What really had me laughing was the "Pailure to follow instructions" part. I don't know why I thought that was so funny. I just did.

Do I have sympathy for the translators? Of course I do.

Just the other day I went into the bread store and picked out five little loaves of bread.

"How many?" asked the cashier.

"Two and a half pounds," he responded with an irritaed sigh, "I thought you spoke Arabic because you said 'Hamsa' and then you don't understand what I say. Why do you speak Arabic if you don't speak Arabic?"

Because we've all got to start somewhere, I guess.
Posted by Nancy at 3:49 PM