Courtesy of the Muslim Brotherhood 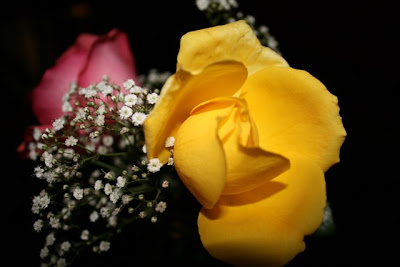 I accidentally locked Andrew out of the house last night. I left the key in the door on the inside, which meant that unlocking the door from the outside was next to impossible. So instead of just opening the door, Andrew rang the doorbell. When I opened it for him, he presented me with a cute bouquet, wrapped up nicely in cellophane and tied with a ribbon.

"For you," he declared, sweeping a chivalrous bow, "Courtesy of the Muslim Brotherhood."

I had so many questions floating around in my head that eloquence failed me.

"What?" I asked stupidly.

And then I corrected myself, "I mean, 'Thanks for the flowers....What?'"

That morning Andrew's Arabic class had a guest speaker, a parliamentary member of the Muslim Brotherhood. Andrew said it was very interesting to hear from him and he brought everyone in the class a small bouquet. 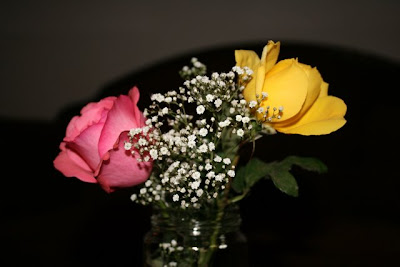 So that's how I came to have a bouquet of roses from the Muslim Brotherhood sitting on my dining room table, just in case you wanted to know.
Posted by Nancy at 3:42 AM