Princess for a Day

Since marrying a man dreaming of becoming a university professor my aspirations of princess-hood were pretty much shot. He treats me like a queen, though; that much is true. Today I went out with the Relief Society and Andrew did the dishes, took out the trash, scrubbed the tub, and hung the laundry out to dry. Clearly he's amazing. Clearly.

I took Rachel with me because Andrew had to go meet with some classmates to work on a group project later in the day (grumble, grumble). We caught a cab with Linda and Lora and headed out to Zamalek, one of the "rich" districts of Cairo. There are a couple of sisters (Tasi and Deneece) who planned a shopping trip for us so that they could show us some of their favorite stores, and let me tell you, Zamalek has way better shopping than Maadi!

We met in front of the Tueller's house, which might more appropriately be called a mansion, where we were invited to have some goodies before hitting the shops. 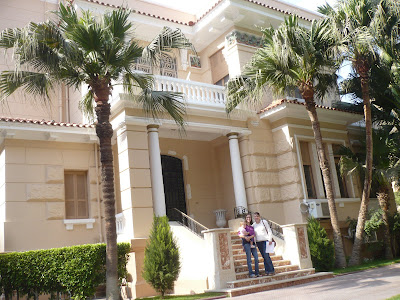 Rachel, Me and Lora in front of the mansion
Apparently Deneece's cook was just hankering to cook for more than just just the Tuellers and their son because our "goodies" ended up being more of a well-balanced meal than a light snack. We had fresh orange juice, fresh lemonade, and cold water to drink. Our snacking started out with a huge tray of cookies, both peanut butter and chocolate chip. Rachel was eating those like it was nobody's business and was getting crumbs all over the place. I felt kind of embarrassed, but not as much as I would have if I thought Deneece would have to clean up after her. Since I knew she had someone do her cleaning for her I didn't feel as guilty. Is that bad?

Then they brought out some crackers with cheese and olives.

Rachel wanted one of those, but only one. Then she wanted more cookies, which was fine since there were still plenty on the table in front of us.

Just when I thought we were finished eating the servers started bringing out gold-leafed plates with delicious quiche! And when we were done with that they brought around a ring-cake of the most delicious apple-cinnimon goodness! 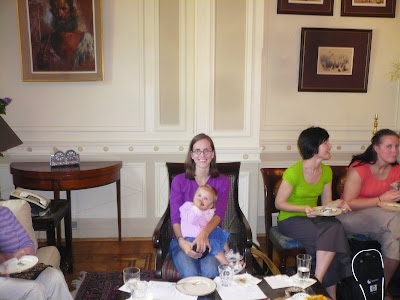 Rachel eating a cookie
And then we sat there and ate more cookies. I was stuffed by the time we were ready to tour the mansion.

Brother Tueller is a diplomat--a pretty high-up-there diplomat, to be honest--and they host all these fancy parties, so they live in this huge mansion. Deneece took us down the "servant's staircase" to see the kitchen. It's huge. There's even an elevator in there to transport the food up to the serving room. Amazing!

She showed us the storage room for the dishes. All the American diplomat residences have the same dishes: gold trimmed plates and crystal stemware.

When she told us we had just eaten off of golden plates I just about choked. Apparently she has to file reports everytime something gets broken at a diplomatic party--who broke it, what was going on, etc. Melissa and I joked about filing reports when people trash our styrofoam plates.

After touring the kitchen, Deneece showed us the pool and the guesthouse and the grounds.

It's an amazing house, almost like a museum. I'll have to borrow the book she has about it because it sounds really interesting. It was built in the late 1800s, I think, and it has some original furniture from that time--tapestries and things. And then with all the trinkets Deneece has from her travels. You could stay there all day just looking at things. 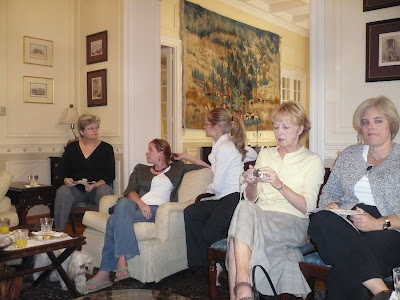 Deneece is on the far left. You can see a tapestry in the background
Sadly, the neighboring buildings aren't as well kept. The mansion nextdoor is owned by the minister of fianance and he can't afford to maintain it, so he has some maids living there but he doesn't. It's just crumbling to pieces. 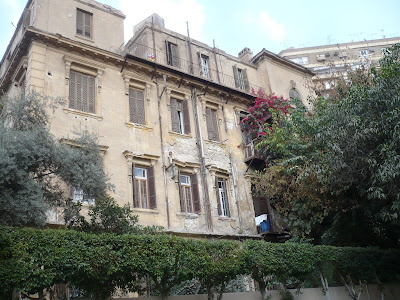 When we'd seen all there was to see, Rachel had to go potty (for the second time), so Tasi and Deneece pointed the other women to the shops and waited for us while Rachel went. Lora also hung back with us. I suppose we were the lucky ones because we got to walk around with Tasi, who knew exactly where she was going, instead of wandering around being lost!

We had a great time shopping. Rachel and I got some cute shirts at an outlet store in preparation for winter. I wasn't planning on buying anything more than a few sweaters--one for her and one for me--but then she spotted this shirt and fell in love with the animals on the front. It's actually very "her." She loves running around and growling at people, so...why not? Just because it has random English all over it doesn't mean she can't have it! 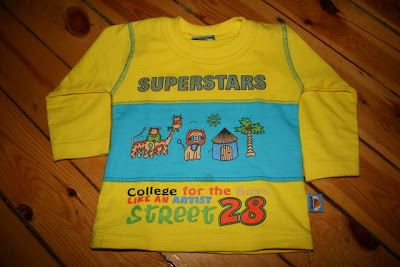 College for the Boys like an artist street 28?
And then I fell in love with this shirt right at the cash register (which comprised of a man and a calculator and a pocketful of cash) and it was just fate. 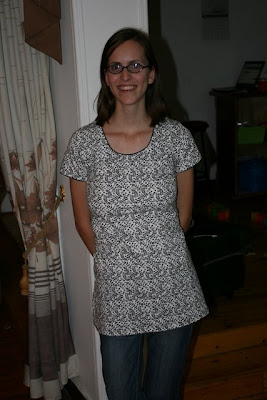 Luckily I thought the jacket I picked out for myself was 75 LE but it was actually only 25 LE, so even with the extra shirts for me and Rachel I ended up spending less than I expected to.

Besides getting new clothes and eating a never-ending supply of cookies, two things she really enjoys, Rachel's favorite part of the day was walking on the wall. Rachel lives to climb. 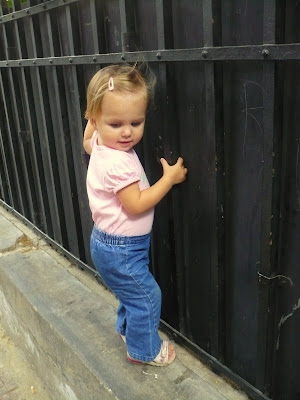 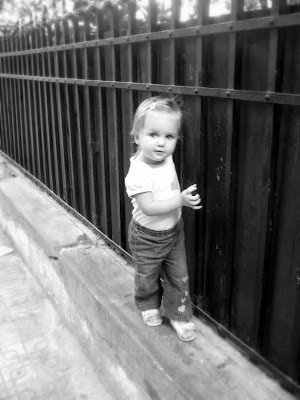 Getting braver
It was hard to face reality when we came home, after our hard day shopping and being pampered and waited on hand and foot. There was a bee in Rachel's room. A spider on the dishes in the drying rack. And I could hear our rat Templeton running around in the ceiling. And there was no cook to make dinner for me.

Thank goodness Andrew did all that work around the house before he left for his meeting or I might have cried. I might not be a real princess, but I'm his princess and that's good enough for me.
Posted by Nancy at 2:49 PM