The only thing on our itinerary for April 1st was to get to Aegina Island without going crazy. Jaehee was planning on waking up early in the morning and going back to Monastariki to do some last-minute site seeing before we left Athens, but when I woke up at 9:00 AM she was still in bed. Instead we all just got ready to go to the island together.

We rode the metro to the end of the line (Piraeus) and found the ferry station easily. It was fairly obvious, what with all the ferries and things. Finding the passenger station was a little harder, but not by much. 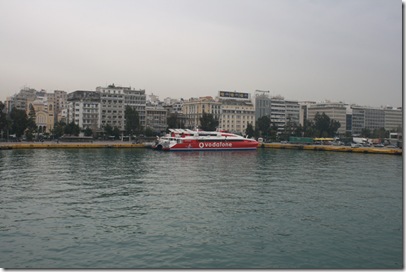 Rachel was thrilled to ride on a boat. She was the only one in a decent mood. Jaehee and I were both stressed to the max and rather grumpy. Everyone who gave us directions to the passenger dock told us that there was going to be a transportation strike the next day. There would be no ferries, no buses, no metro, no tram. No public transportation. The whole day long.

We decided to go to the island anyway because we had booked a hotel for the night and we wanted to at least ask them about getting our money back since we wouldn’t be able to stay. We just had to be sure to catch the last ferry back (6:00 PM), which didn’t give us a whole lot of time on the island at all.

Eventually Jaehee and I consigned ourselves to roll with the punches and tried to be happy for the rest of the boat ride. I don’t do well with movement when I’m pregnant, I’ve decided, and I keep feeling sick in vehicles, be it airplane, boat, bus, or metro.

I’ve been wondering why this pregnancy has been so much “nicer” than when I was pregnant with Rachel and I’ve come to the conclusion that it’s because I’m not waking up at 7:00 AM and riding in the car to work everyday. Instead I wake up when Rachel wakes up (or later) and then sit on the couch. That makes the queasiness much more tame, I think.

Even still, I felt rather healthy the entire trip, unless we were on a boat or bus. Andrew gave me a blessing before we left that my symptoms would be mild while I was away from home, and they really were! I did fine with less sleep and rarely got up in the night to use the bathroom and never felt queasy in the morning. It was quite an amazing contrast when I got home and that blessing was revoked.

I woke up to go pee like 5 times the first night we were back and my bladder has been pretty consistently active since then. Sigh.

Anyway, I tried to be cheerful despite the uncomfortable nature of my pregnant state. 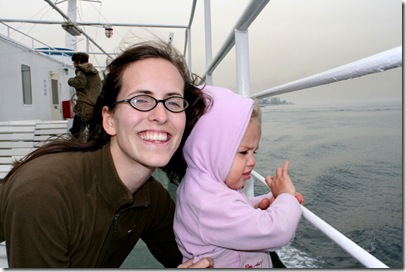 It got pretty cold and windy after we started moving and so we soon moved inside the smoke-filled cabin. Greeks enjoy smoking. They smoke all the time. I thought Egyptians smoked all the time, but was shocked with how much smoking was going on in Greece.

The smoke didn’t help with seasickness, but at least it was warmish.

Instead we had to take a bus across the island to find our hotel. It was a long, uncomfortable ride for me, through canyon roads. Jaehee was very excited about the view but I could hardly look out the window. There was a cute little schoolgirl on the bus who spoke a little English. She was very nice and shared some popcorn with Rachel and helped us get our stroller off the bus. I was very glad when our driver announced unceremoniously that we were “there.”

We stumbled off the bus and were left in complete solitude. Agia Marina was completely deserted.

We wandered around and found the beach and, luckily, a man who was able to give us some directions to our hotel. He pointed right in front of us.

“You see that red sign that says ‘hotel?’ That’s your hotel.”

He also gave us a tip on pushing the stroller through the sand. Jaehee was carrying it because the wheels wouldn’t turn. He saw us struggling and told us to go up to the water’s edge where the sand was wet and compacted. It was much easier to push there and we made it to our hotel in no time.

We loved our hotel. It’s called Hotel Rachel and is run by a brother and sister whose mother’s name was Rachel. They called the port and verified that there would be one ferry back to Athens at 7:25 AM and arranged to have a taxi pick us up so that we would be sure to make it on time. 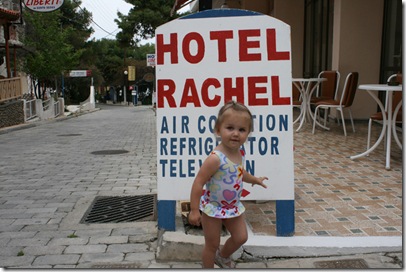 They were very hospitable and friendly and our room was a lot more inviting than our room at Hotel Amaryllis. The beds were even more comfortable, though not by much.

They also called their nephew, Theasis, over to play with Rachel. He was completely decked out in winter gear even though it was above 20°C. Still, I felt like a bit of a negligent mother for letting Rachel venture out in only her bathing suit…but the hotel was right on the beachfront and that’s where we were headed so what else was she supposed to wear? 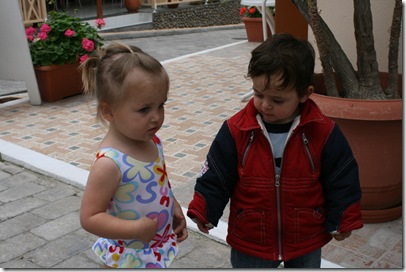 I think it was refreshing for her to have some child-to-child interaction for a while. Theasis and his mother even joined us down at the beach and he and Rachel threw rocks into the water together. 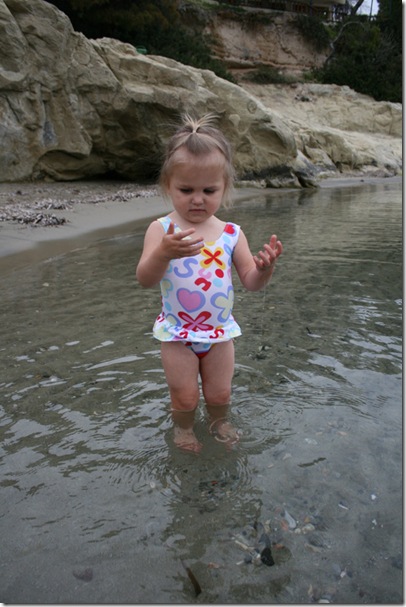 The water was a little chilly so we didn’t actually end up swimming, just wading. The water was beautiful and we had the whole beach to ourselves. Apparently Agia Marina is a very busy place in the summertime and is boasted as being Aegina’s best beach… It was a nice beach, but it definitely wasn’t busy. 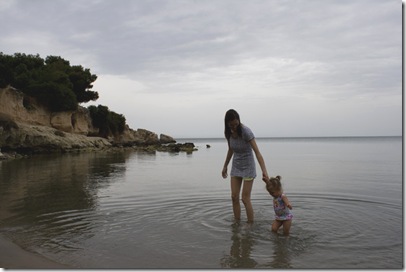 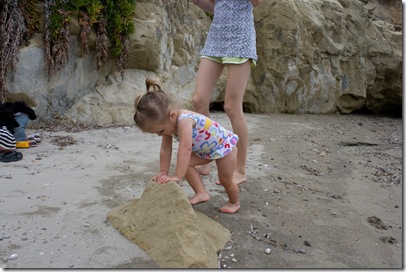 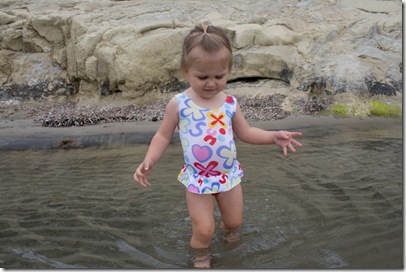 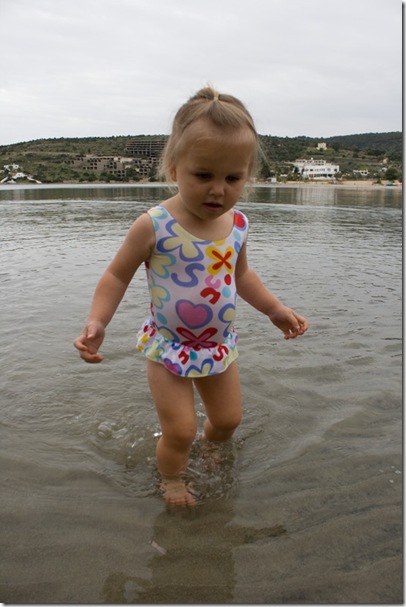 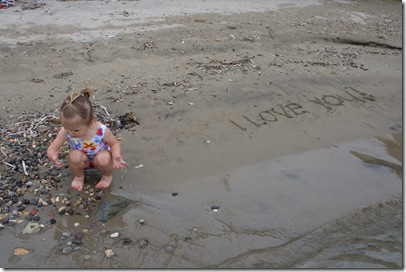 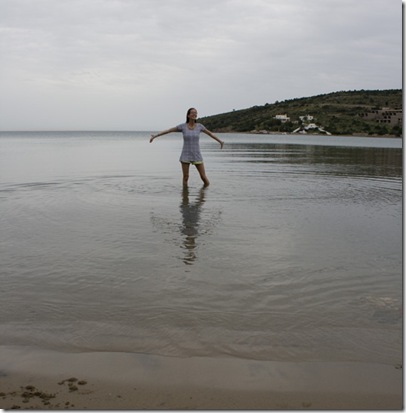 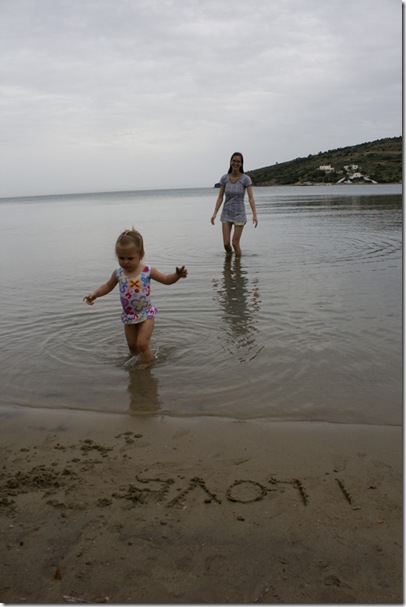 We didn’t stay at the beach too long because we were hungry and wanted to find a place to eat. That was a chore. We walked up and down the vacant main drag several times. Practically everything was closed up with paper in the windows. It was a complete ghost town. 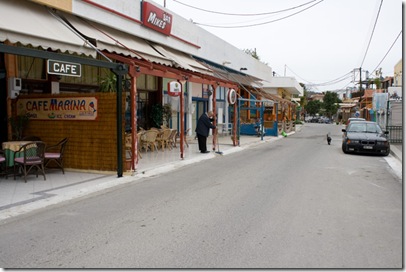 We wandered into a few restaurants with open doors but found out the doors were open only for ventilation purposes. A lot of the stores are prepping for tourist season, I guess, and that involves painting. And we did find one gyro stand, but he said his meat wouldn’t be ready for another half hour to an hour so we pressed on.

We saw the nice little girl from the bus sitting with some folks outside of a convenience store and they pointed us to what seemed to be the only open restaurant in town. We were its only customers.

We both ordered a Greek salad and I was quite surprised when it came out. I knew that it would have cheese on it but I didn’t realize quite how much cheese there would be. There was basically a whole block of cheese sitting on my salad. 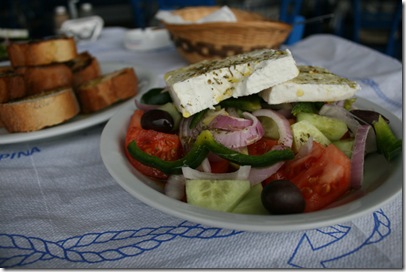 It was good, although Rachel wasn’t fond of the fetta, and we all enjoyed our serene meal by the seaside.

We went for a little walk after dinner, running into nobody, and seeing nothing much. I think it would be the perfect honeymoon destination—if you were to go in the off-season—because we felt completely alone. It was such a nice change of pace from the business of Athens and Cairo. 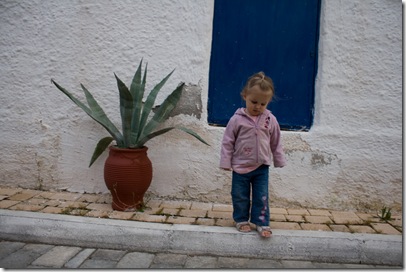 Rachel had fun watching some ducks swimming at the port. We were amazed with how small Agia Marina port is! Boats come only on the weekends during the winter months, so it’s no wonder we were dropped off at the other port. 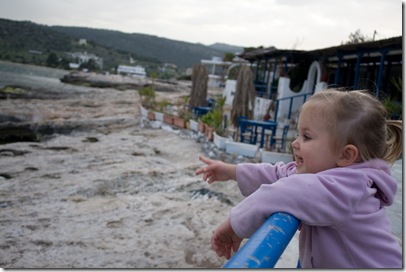 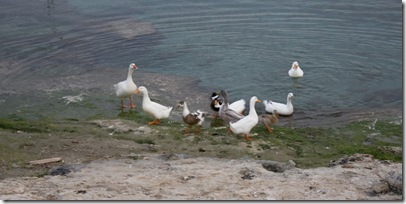 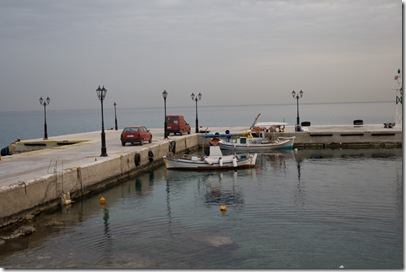 When we were finished with our walk we went back to our hotel to Skype with Daddy. Rachel was excited to see him and gave the computer a hug. I think it’s hilarious when she does that. He reassured us that the strike probably wouldn’t be as bad as we were imagining because it was a European strike; although they threaten to close all public transportation for 24 hours, they probably won’t.

He also said family prayer with us, which was very nice. We had been missing our Daddy a lot.

And then we went to bed because there was absolutely nothing else left to do on Aegina and because we had to get up early in the morning to catch our taxi. It was so beautiful, though, I would have liked to stay longer.