Today is Good Friday, so I thought it was appropriate for Rachel to wear her “Easter Sunday” dress today, since we go to church on Fridays here. It’s a hand-me-down from my friend Mary Kay’s daughters and I think it’s so adorable! It’s been sitting, waiting, in Rachel’s closet for her to get big enough to wear it. (Her hair clip is courtesy of Auntie Emily and the shoes she chose to wear are from Jacqueline).

I wasn’t sure if it would even fit her yet since it’s 2T and she still wears some 12 month (and sometimes smaller) clothes, but sizes are irrelevant, I guess. She has some 18 month capris that she still wears that I started putting her in when she was like 9 months old because I thought they were pants. Then my friend Natalie said, “Oh, Hailey had pants just like those…only she wore them when she was about a year and a half…and they were capris, not pants.” So that’s why they were so short. Got it. Those particular pants have had a lot of wear.

Anyway, back to her Easter dress…

She tried it on last night and was so excited to wear it to church the next day. She kept twirling around in her room and looking at herself in the mirror.

When we were ready to go to church this morning I couldn’t help but take some pictures of her. She looked so adorable and grown up!

I asked her if she was ready to go to church and she yelled, “NO!” and ran off. A few seconds later she emerged again carrying a copy of the Book of Mormon. Her favorite song right now is “Book of Mormon Stories.”

“Boot a Morma,” she said. And then she was ready to go to church. She carried her little scriptures the whole way (we even made it on time) and sat so nice and still during sacrament meeting, folded her arms, sang the songs, and said “Amen!” at all the right times.

She was excited because Mommy and Daddy gave talks today. I was worried that she would cry when I went up on the stand but she sat nicely on Andrew’s lap. It was definitely a good Good Friday! 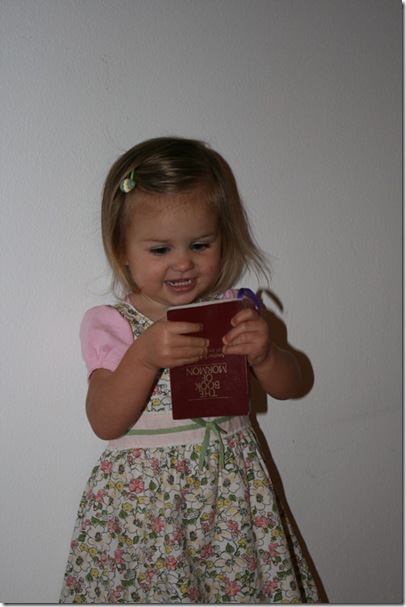 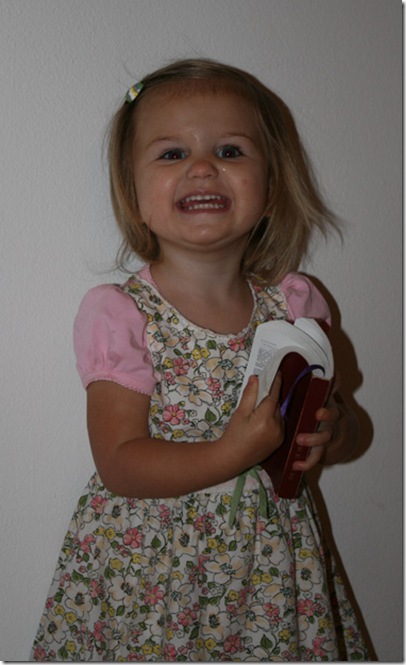