My friend Josh claims to have never had funeral potatoes, ever. Not in his whole life. I wondered aloud how this was possible since he's been a member his whole life. Even his wife questioned the truthfulness of his statement. So we described them to him, just to make sure. Hashbrowns, cream-of-something soup, sour cream, cheese, all baked together and topped with corn flakes and more cheese. That's got to sound familiar.

He denied it, saying that it's a "Utah dish." Granted, it probably is kind of a "Utah dish" but Josh is a Layton. His middle name is Layton. He descends from Christopher Layton. His family is from Arizona. How could he never have had this dish?

His answer: It sounds like a casserole. My dad basically banned my mother from ever making a casserole.

Our answer: Yeah, but they serve it at funerals and things.

His answer: My brother and sister were sick a lot. We didn't go to church functions.

Our answer: Uh, a funeral isn't exactly a church "function." It's a funeral. You didn't ever go to a funeral?

Seriously, how could he live his life without having funeral potatoes? I just don't see how that is possible. I wasn't raised in Utah, either, even though I'm also a Layton, but I've had funeral potatoes several times. And outside of the state, too.

So I spent a few days thinking about funeral potatoes. I kind of like them, truthfully. And I remembered a story involving funeral potatoes that I think is basically hilarious.

In all fairness this is more a story about my cousin Elizabeth than it is about me. But I was there and I was involved and to this day I still find it hilarious, so here it goes.

Elizabeth is probably one of the most picky eaters I've ever met in my life. At least, she was. She's really branched out in recent years. Growing up seems to do that to most people. But she, seriously, was a picky eater. She would only eat butter on her spaghetti, but not just any butter--spray butter. She wouldn't eat any other kind of butter. And that's just one example. The poor girl liked nothing.

When she was in high school she realized that she was missing out on a lot of things and decided that she should try everything at least once. (She went so far as to go to China to teach English for a semester. CHINA! They eat chicken leg soup and fried monkey brains over there, among other things, and she decided to go to China! (I tried to convince her to at least go to Russia where the cusine was a little more tame.--there she would eat potatoes, beets, cabbage, cabbage, beets, and potatoes--but to no avail)).

Anyway, this brings us to Aunt Lillis' funeral. Aunt Lillis is my grandma Conrad's sister. She died August 14, 2001, a little over a year after my family moved down to Utah. Two years previous, when she was 84, she visited my grandma up in Canada and we went down to see my grandma at the same time so that we could see her, too. She was so spry and spunky, I though she was going to live forever. She had red hair, at least she dyed it red, if that says anything about her personality.

"I'm not 84!" she'd quip if anyone tried to do anything chivalrous for her like give up their chair or help her down the stairs, "I'm 48 in reverse!"

It was kind of a shock to me that she died at 86, only 68 in reverse, which is still kind of young. I thought for sure she'd at least wait until she was 89 so that she'd be able to die at the ripe old age of 98 in reverse. 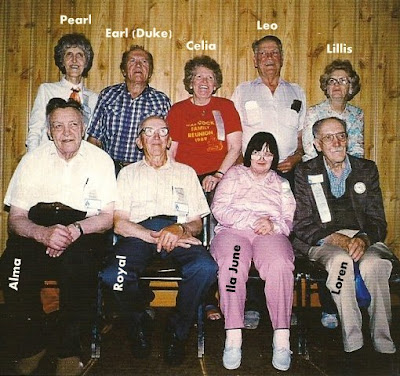 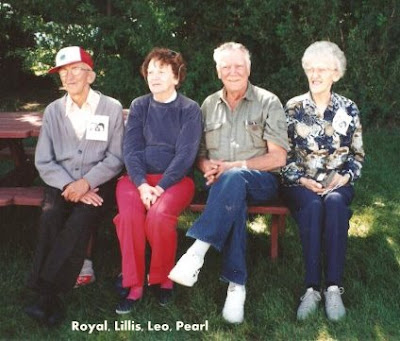 My grandma (Pearl) and 3 of her (11) siblings in 1995...I do remember this reunion
But she didn't wait that long, so we ended up going to a funeral just 2 years later. At family funeral the cousins all tend to bunch together afterwards while the "grown ups" do their thing. We'd remininsce in our way and they'd reminisce in theirs. And so it is that I ended up sitting at the same table with Elizabeth.

We started through the buffet line together, but I filled my plate much faster than Elizabeth did. She was still holding her empty plate, looking warily at the spread before her. My plate was full of funeral potatoes and all sorts of jello salads. Being the kind cousin that I was, I told her to stop being so picky and that I'd be waiting for her at our table.

A few minutes later she joined me. I looked at her plate and laughed. It was heaping with mounds of funeral potatoes.

"Well," she started, "I thought about what you said about not being picky...and about my resolution to try everything once...and I decided that I would try a little bit of everything on the table. But there were so many things out there to try! My plate was full before I even reached the salads! But I didn't want anyone to feel bad for having no one try their casserole. I mean, there were several pans out there that no one had even touched!"

"Oh, Elizabeth," I told her, "That's because all those casseroles are the same casserole. They're all funeral potatoes."

"No! They're different!" she exclaimed, "See? This one has corn flakes on top and this one has melted cheese..."

"Yup, and underneath that, it's all the same."

Without consulting the grown-ups we decided it was probably okay if she ate a normal amount of potatoes and threw the rest away (I hope that's okay...better to ask forgiveness than permission, right?) so that she could still have room to try a normal amount of salad. I found myself actually encouraging her to pace herself when trying new things which is something I never thought I would ever end up doing.

There were probably 30 different salads on the table, and about 25 of those were of the jello variety.

Who knew choosing jello was such an art?

I wish that worrying about which kind of jello to choose could always be my greatest concern in life. Unfortunately every last one of my grandma's siblings has since passed away, including my own grandma. I dread the day when it will be my children and their cousins goofing off (and eating more jello salad than should be humanly possible) while my siblings, cousins, and I are trying to console each other. Not that I'm trying to be morbid or anything.
Posted by Nancy at 3:37 PM