The first thing I did when I woke up this morning was eat some cookies. And then I packed up what I could without waking my still-sleeping family. As you can see I was kind of kicked out of bed. It wasn’t only Rachel. It was a combination of Rachel and flies. 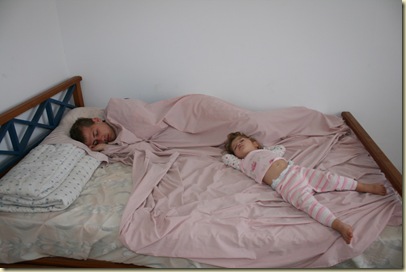 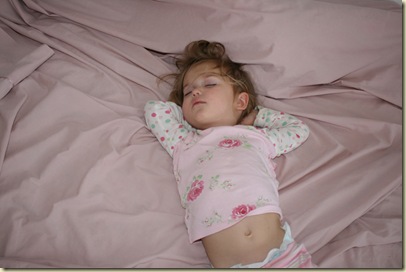 Now that it’s spring the flies are back in full force and they are annoying. They seem to strike only when the sun is up. I don’t know what they do while it’s down (sleep?) but since we haven’t had Daylight Savings yet the sun comes up at like 4:30 AM. That leaves a lot of time for the flies to dive bomb us before we actually want to be out of bed.

We used a quilt for a pillow since all the pillows looked a little mildewy (there was a pillow case on my side, too, but I had already taken it off to pack it). This condo is strictly BYOP.*

When Rachel woke up, we went outside to play bubbles. She had a blast, as did we. It was so nice to have a quasi- fenced yard with grass where she could just run around and be a kid. We’re going a little picture heavy because it’s late and I don’t know what to write. Plus she was having so much fun! 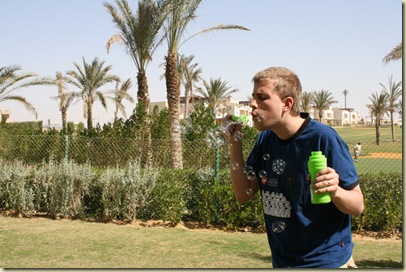 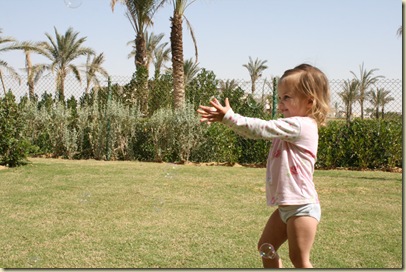 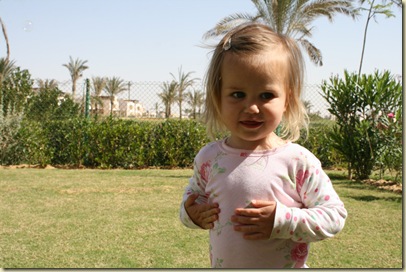 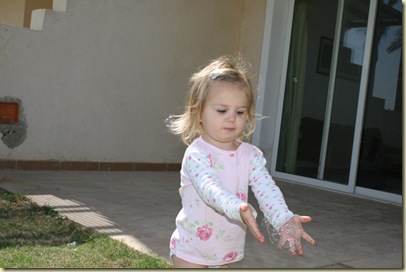 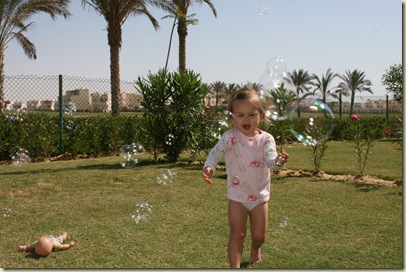 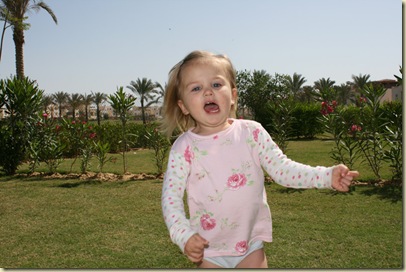 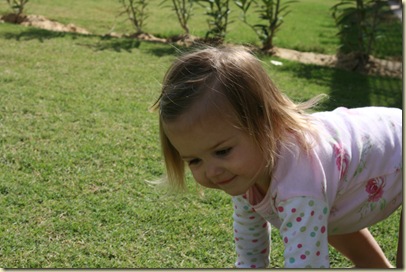 You might have noticed there aren’t a lot of pictures of both Rachel and Finn together. That’s not because we didn’t let them play together. It’s because we didn’t let them play together while one of the parents was behind a camera lens. It took all 4 of us to referee those two. Turn your back for one minute and you’d find that one of them had tackled the other and had them pinned for the count. 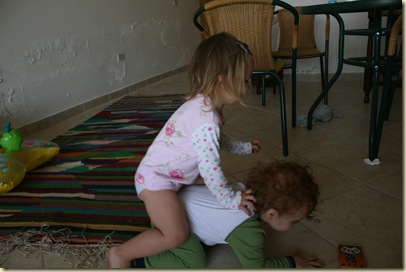 After a lovely breakfast of French toast, and after waiting for the plumbers to leave, we headed off to the beach again. Morning is definitely the ideal time to hit the beach. Although it was, once again, strewn with dead jellyfish, the sandbars were back and it was empty and calm.

Rachel and I made another mosque, although I think it looks more like an octopus than a mosque. 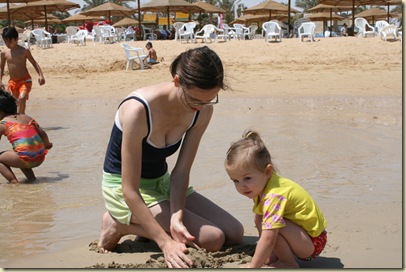 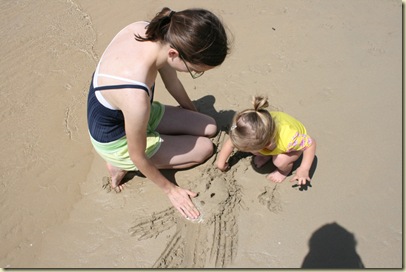 We had fun playing in only the most shallow of the shallow water. 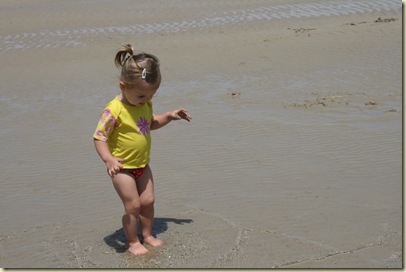 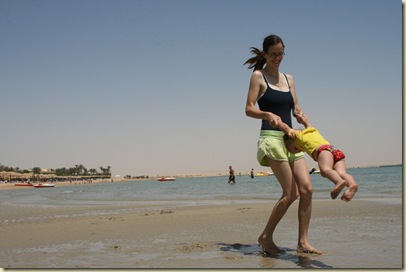 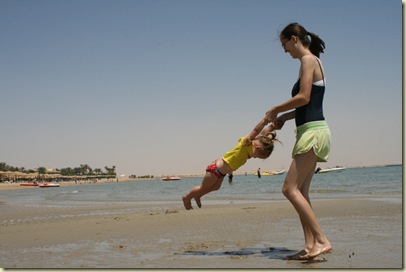 And threw some mud at Daddy. 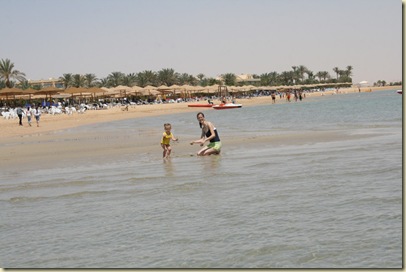 I tried to show Rachel how much fun Finn was having swimming with his parents but after we got into the water past her ankles she went ballistic, made me pick her up, and wouldn’t let me put her down. 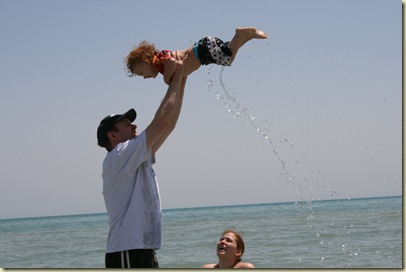 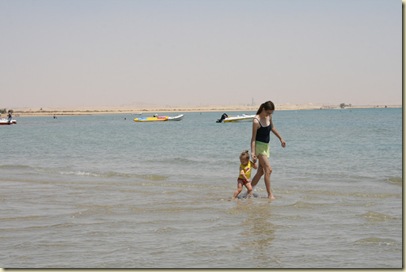 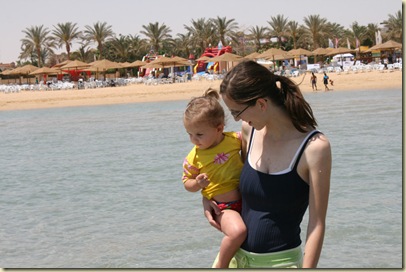 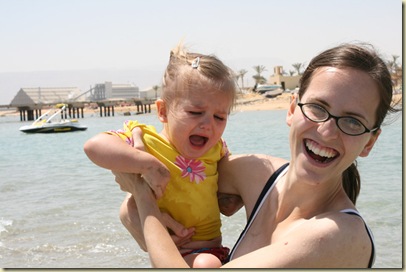 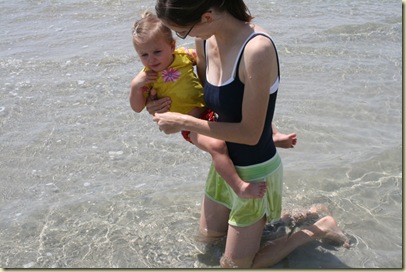 Eventually she went to Melissa, who vowed to keep her safe from the water, and Andrew and I snorkeled for a little bit. The Masons have their own snorkeling masks and they lent them to us so that we could try them out, not that there was really very much to see.

There were some little fish and a few hermit crabs, but the water was so shallow that we were really just swimming around looking at sand. There are reefs around though. We know because there was a ton of coral washed up on the shore. That and the Red Sea is famous for its good snorkeling views. We really want to plan a real snorkeling trip sometime since neither of us has ever been.

It was fun to try out the masks, though. Even though Melissa reminded me to breathe slowly I think I was still hyperventilating some since I kept seeing spots and feeling dizzy. I’ll have to practice some more.

The masks reminded Rachel of Wall-E and she was very excited when we put them on. She had been carrying them around the condo all weekend, affectionately crooning out “Wa-wee! Wa-wee!” and trying to find and Eve look-alike, to no avail.

We ended our beach trip at noon again and hurried back to the condo to eat lunch and clean up before we left. We thought our ride was coming at 1:00 PM, at least, those are the arrangements we discussed with the driver who dropped us off, so we did a marathon cleaning job and hurriedly scarfed down our sandwiches.

We had a wonderful time and definitely look forward to going again!

*Bring Your Own Pillow, in case you didn’t figure it out.