Back to Athens (April 2)

Our day started bright and early when we hopped in the taxi and wound our ways through Aegina’s country roads. We found, to our extreme relief, that there was, indeed, a ferry scheduled for that morning, and bought tickets to board.

The only reason that particular ferry was running is because it was coming from another island and stopping in Aegina on its way to Athens. Since it wasn’t operated by Athenians, it wasn’t participating in the strike.

We enjoyed a beautiful sunrise while we waited for the ferry to dock. 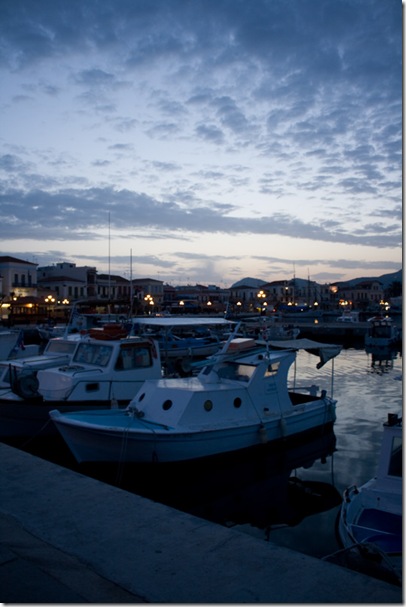 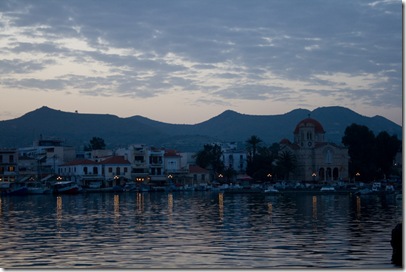 Getting on the ferry felt so safe. We were scared, for a while, that we would be stranded on the island until the strike was over. Granted, there are far worse things than being stranded on a peaceful, secluded island, but we really wanted to make our flight and so were crossing our fingers and praying the whole night that everything would work out alright.

We got back to Athens in style. The Hellenic Seaways has much nicer ferries than the one we took on the way to Aegina. Pity I can’t remember the other line we took because it was pretty pathetic. The ferry we took back to Athens had nice booths to sit in, wasn’t too smoky, and even had a safety announcement similar to what you hear in planes. It was a nice ride.

Rachel walked from the ferry to the escalator (they have this escalator-bridge that goes over the street) following the yellow strip of tile in the middle of the walkway. It was quite a long walk, too, but  she enjoyed herself on her yellow brick road. 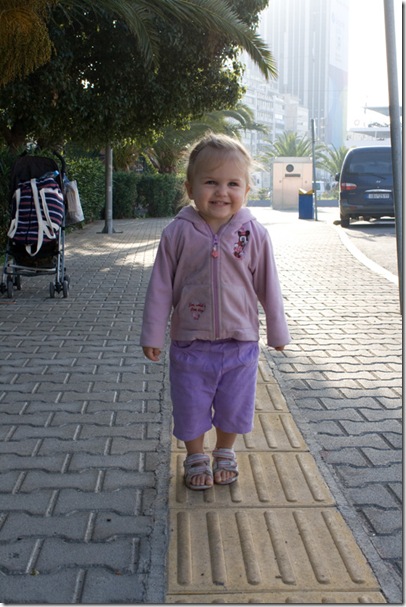 We noticed, while walking, that there were public busses driving by, filled with people. That gave us hope. If there was one thing we didn’t want to do in Europe it was spend money on taxis. We walked to the metro, just to check, and found that it was bustling with people, as it is everyday.

The strike, rumored and announced as a 24-hour thing, was only for the hours of 5:30 AM until 9:00 AM and again from 9:00 PM until midnight. That meant that the metro (and all other public transportation) was fully functional between the hours of 9 and 9. We were so happy to spend only 1 euro to get to our destination, instead of 30 or 40 or more!

We first went back to our previous hotel because they said they would hold our luggage for us while we went out on the town. This ended up being our most “productive” day in Athens, if sightseeing can be considered productive. We were at Monastiraki Square by 10:00 AM, which is a few hours earlier than we’d ever made it out of our hotel room while staying in Athens!

We were happy to use up most of the vouchers on our Acropolis ticket. We first visited Ancient Agora. 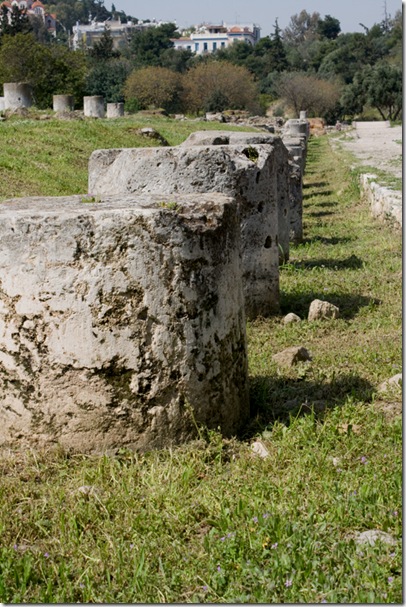 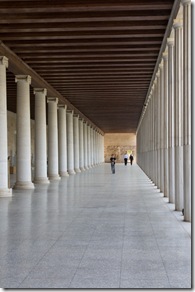 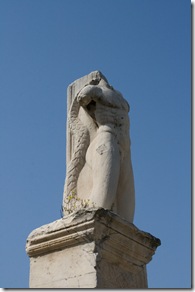 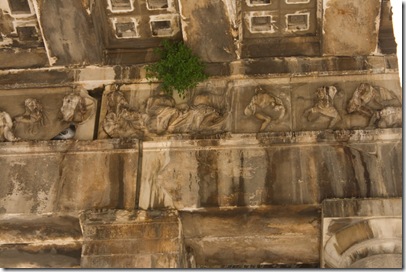 Rachel slept through a lot of it, including the museum, which was filled with typical Ancient Grecian vases and statues. The temple of Hephaistos is at the top of a hill and Jaehee and I lugged her stroller up the whole way. She completely missed out on the view. 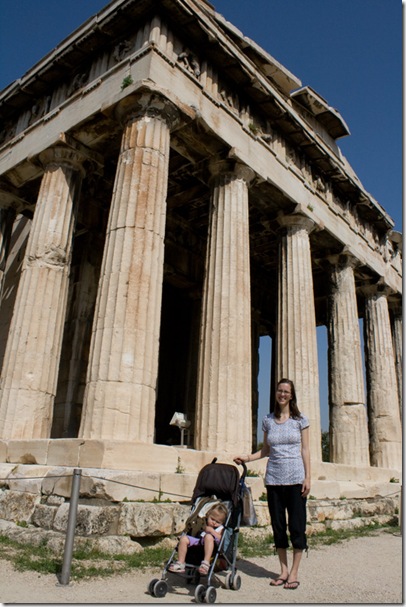 It must have been a well-needed nap, though, because she woke up smiling and singing. 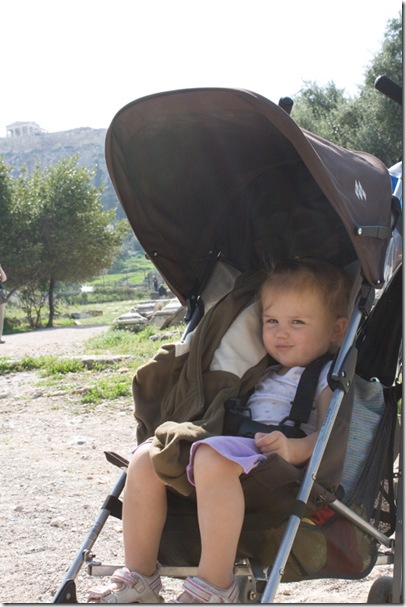 She wanted to get out to play soon after she woke up, so we found a shady spot and let her run wild. She found a stick, which upped her happiness levels about 20 fold. (Sorry for the plethora of Rachel pictures that follows. She’s too cute to eliminate any. They’re mostly for her grandmothers, anyway, but I figure if you didn’t like looking at pictures of Rachel you wouldn’t be reading our blog). 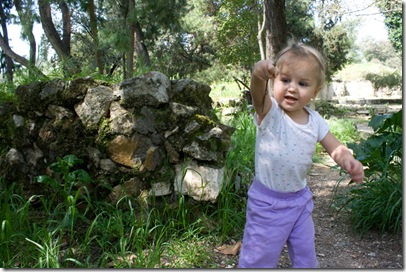 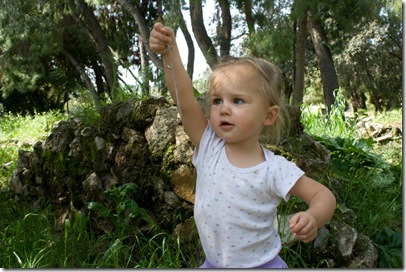 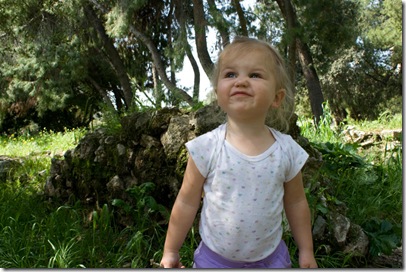 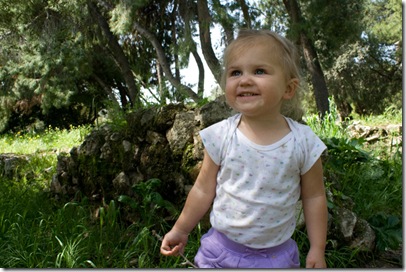 From the Ancient Agora we headed to the Odeon of Herodes Atticus, an amphitheater with restored seating that is still used for concerts and performances today.

On our walk over there we were met by an older gentleman who was charmed by Rachel’s charisma. He picked a flower and handed it to her with a sweeping bow, saying,

Then we went our separate directions, the old man and Rachel equally happy with the turn of events. A few minutes later, Rachel started screaming.

After a little investigation I found that the flower stems were covered in thorns and Rachel had pricked herself, so I took them away, scraped off the thorns, and returned the flowers to her and all was right in the world again. It was a well-meaning gesture by the man, I’m sure, because the thorns weren’t that noticeable…until you pricked yourself, I guess. 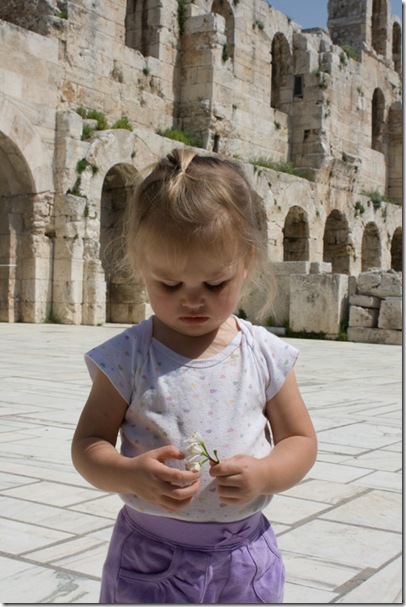 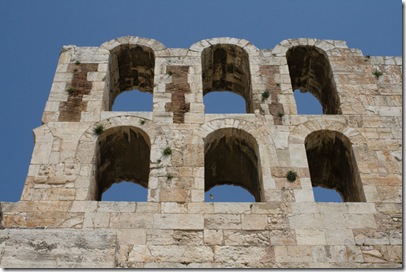 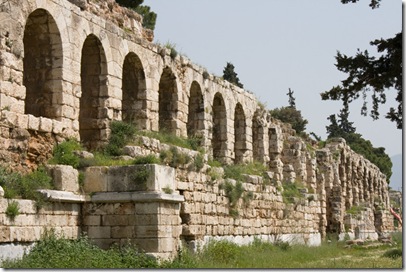 We trekked off to to the Temple of Olympian Zeus from there. It looks like it used to be grand, but all that is left now is a series of columns looking stark and lonely. One column fell over during a windstorm in 1852. I think it adds an interesting dimension to the temple site. 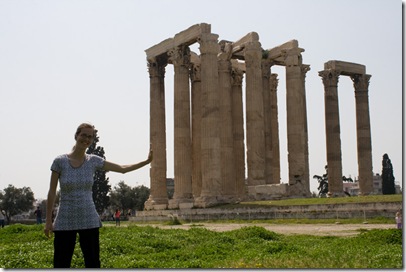 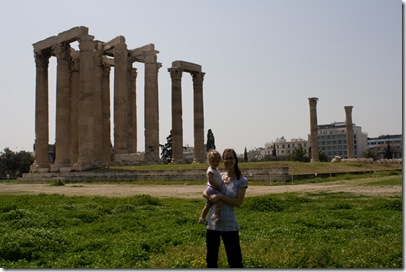 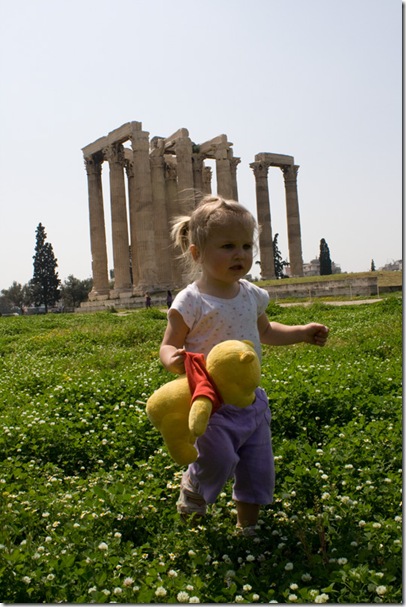 By the time we got to the Temple of Olympian Zeus I was sure to clarify who needed to go before rushing off in search of a decent WC. Often it was Pooh, in which case Rachel was told to find a pretend potty for him since our toys don’t use real potties. These are two of Pooh’s pit stops: 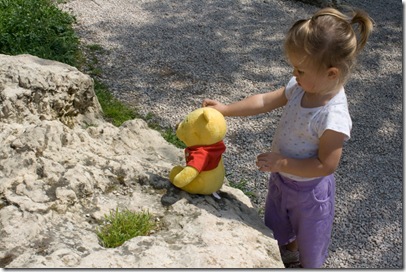 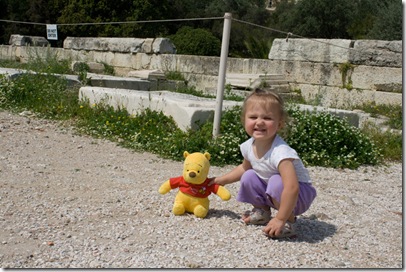 Our last stop in ancient Greece was the Theatre of Dionysus, a somewhat ruined amphitheater that is supposedly the birthplace of Greek tragedy. It was interesting to see the noble seats verses the common seats. The elites had carved seats with backs and sometimes armrests. The commoners had bleacher-style seating. 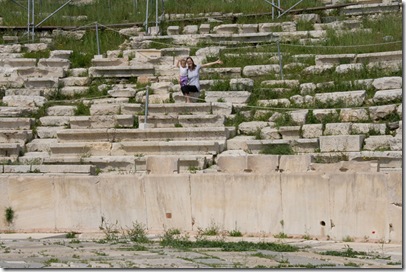 By the time we had circled around the theater, we were getting kicked out of the complex. By my clock the site didn’t close for another 20 minutes, but the guards were serious about closing that early. The only reason they let us onto the site is because we already had tickets (from our Acropolis ticket). They weren’t selling any tickets at the gates when we arrived at 2:30 PM, even though the complex isn’t that big and they were still open for a half hour.

Still, we were pleased that we had gotten into 3 other sites. That’s more than what we’d done on any other given day in Greece.

We were exhausted from all our walking around and sat just outside the gates to the theatre, letting Rachel run around chasing pigeons.

Deciding we were hungry, we set out in search for a place to eat lunch. Unfortunately, since it was just around 3:00 and all the other tourists had recently been kicked out of the sites they had been at so every restaurant was brimming full of people.

We decided instead to get back on the metro and eat near Omonia station instead since it was bound to be less crowded. We forgot, until we were back on the metro, that there were demonstrations going on at both Omonia and Syntagma stations. The demonstrators were peaceful when we used the metro station in the morning—they were picketing, holding signs, and linking arms. Someone was yelling angrily into a loudspeaker. But for the most part things were pretty calm. We didn’t know whether things were going to escalate later in the day or not.

We hoped, since we were already cruising down the metro, that things would still be relatively peaceful and quiet. When we got off the metro we were met with absolute normality. All the protesters were gone and it was completely quiet.

We wandered into a nearby gyro (shwerma) shop where we were given the choice between chicken and, of all things, pork gyro. I got chicken because eating pork shwerma just seemed wrong somehow since I was introduced to the food in Jordan, where pork is, for the most part, taboo.

Later in the day, we headed out to Syntagma, where the bus stop for the airport is. We watched the changing of the guard at the tomb of the unknown soldier in front of the parliament building. 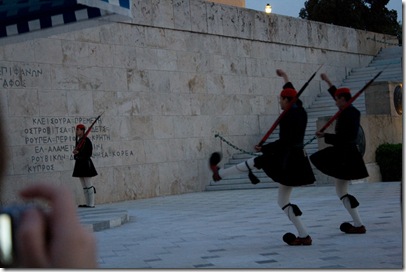 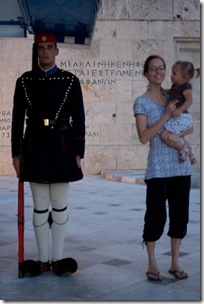 As you can see, they have rather interesting traditional outfits. Their hats are red to symbolize blood and their kilts have 400 pleats in them, one for every year of Turkish occupation. I don’t know why they have those huge pompoms on their shoes.

We only got one picture with the guard and it isn’t a very good one, unfortunately. Rachel was absolutely terrified of him. She sat much better on the steps away from the soldier…where you apparently aren’t allowed to take pictures. 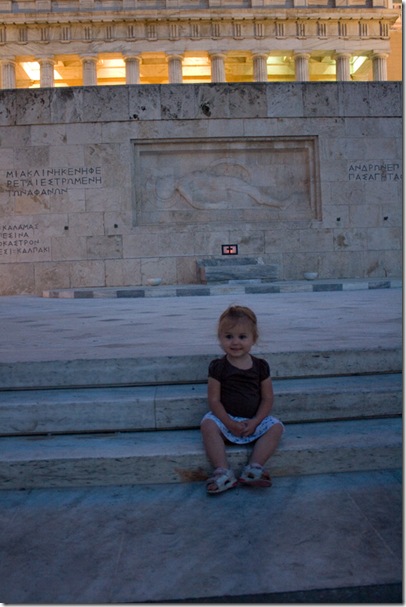 She also spent some time dancing in the streets. Traditional music was playing, left over from the demonstration I’m assuming, and it was hard for complete strangers walking by not to join in when they saw her twirling around in her skirt. (The outfit change was due to the result of a gag-reflex experiment with her fingers. She seriously made herself throw up. So nasty). 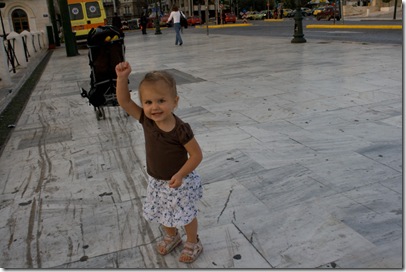 We got to the airport plenty early, and Rachel spent a lot of time playing with a little girl named Nina who was Norwegian/Egyptian. She spoke only Norwegian, but that didn’t stop them from playing together. Rachel would copy everything she said; it was cute to hear her echoing the flowing, lilting tones of Norwegian.

After awhile it got late and Rachel was anxious to get on the plane.

I told her that things were absolutely out of my control and we just had to wait. She was okay with that answer for a while and then asked,

“You want to sleep on the airplane?” I asked in amazement.

She insisted that she did and I told her that was a-okay by me.

True to her word, she fell asleep on the shuttle we took out to our plane and then slept the entire flight home. I don’t think that has ever happened before in the history of Rachel flying, and she’s flown quite a lot for a girl her age.

We were happy to get back home. Rachel alternatively slept and pointed out mosques from the taxi. Andrew stayed up to wait for us to get home and he had cleaned the entire house. It was quite the welcome!