Once upon a time, in a land far, far away, my friend Lydia Penrod was getting ready to move back to the States. Although I found myself deeply saddened by the turn of events, wishing that the Penrods could stick around for another year, wishing Lydia and I could take another belly dancing class together, wishing for another year of having Jacquie at playgroup and in nursery, wishing for another wonderful New Year’s party, and wishing for several other things, it was not to be. The Penrods date of departure loomed closer and closer.

As unhappy as I find most of myself, there is one facet of my being that is rather ecstatic about saying farewell to the Penrods. It’s the hoarding side of myself. The kind of selfish side that wants a year’s supply of everything. My food storage has never been happier, at least, not in Egypt. I think the Penrods dropped off around eight boxes of food.

Anyway, here’s a big THANK YOU to the Penrods! Good luck in Idaho/Iraq! We’ll miss you guys so much, but our cupboards will forever remind us of you! 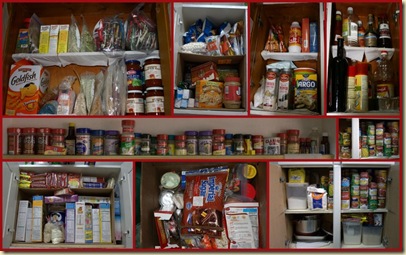